With intense shelling and catastrophic conditions in Idlib province, the Syrian Democratic Forces are welcoming refugees into areas they control to the east around Manbij. 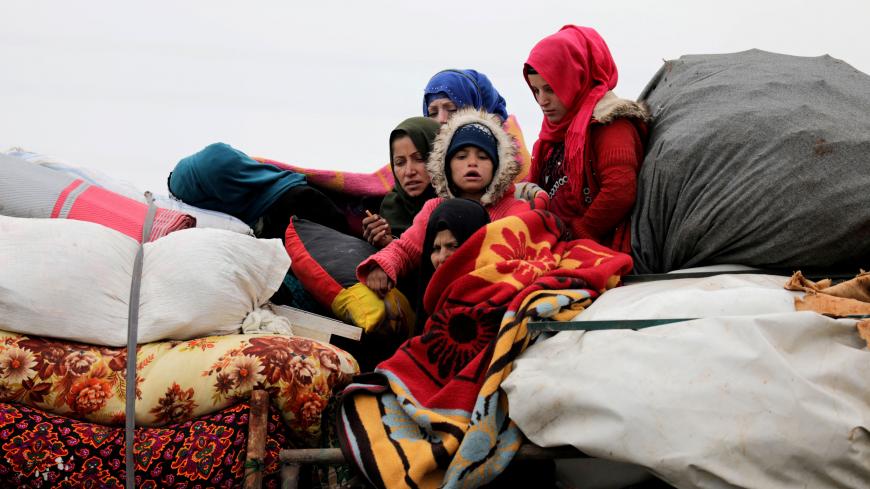 Internally displaced Syrians ride on a vehicle packed with their belongings in Hazano, near Idlib, Syria, Feb. 11, 2020. - REUTERS/Khalil Ashawi

MANBIJ, Syria — Families displaced from Idlib province continue to arrive in Manbij, fleeing the fierce fighting between Russian-backed Syrian regime forces on one side and Syrian opposition factions and jihadist groups on the other.

Thirty-five displaced families made it to Manbij in Aleppo province Feb. 3, according to the Manbij Military Council. The media office of the Northern Democratic Brigade published a video Jan. 31 on its Youtube channel showing another 80 families arriving.

“There are large batches of people arriving in Manbij on a daily basis, so it is difficult to count their numbers," Abu Omar al-Idlibi, commander of the Northern Democratic Brigade, told Al-Monitor. The brigade is affiliated with the Syrian Democratic Forces (SDF), the Kurdish-Arab alliance that controls the area.

Commander Mazlum Kobane tweeted Feb. 6 that thousands of displaced people have traveled east from Idlib to the safe SDF areas, adding that more people were still expected to arrive.

Making the situation in Idlib even more difficult, some 550,000 Syrians had been previously displaced to Idlib from other areas and now must flee again. The United Nations said Feb. 13 that 140,000 people had been displaced from northwest Syria just in the three previous days, many of them futilely headed west to the closed Turkish border.

Idlibi denounced the failure of relief organizations to secure the needs of the displaced, saying, “No humanitarian organization has offered relief or assistance to the displaced civilians, with the exception of the Kurdish Autonomous Administration of North and East Syria [Rojava] and its civilian councils.”

Idlibi, who is from rural Idlib, wrote on Facebook that two members of his family were killed Feb. 3 during airstrikes by Russian aircraft backing the forces of Syrian President Bashar al-Assad.

Al-Monitor spoke with Hamdoun, who declined to give his full name. He said he was displaced with his six children from Jabal al-Zawiya in Idlib province. He talked about the catastrophic conditions and the daily killings taking place in the Idlib countryside, denouncing the Turkish-backed opposition's Syrian National Army for failing to protect civilians.

Khaled Zeino, head of the Northern Democratic Brigade's public relations office, expects the number of people displaced to Manbij to increase as the battles intensify in Idlib, perhaps exceeding 60,000 in the coming months, he told Vedeng News. He added that Rojava officials are setting up a huge camp in Manbij capable of accommodating 100,000 civilians.

Kobane wrote in a Dec. 27 tweet, “Our doors are open to our people in Idlib. They can coordinate with the SDF-affiliated Idlib Military Forces to come to our areas.”

Asked about Kobane’s welcome, Idlibi commended it, adding that it isn't the first initiative launched to help the people of Idlib, as camps were previously established in Tal Rifaat and Afrin — before the Turks occupied them.

Idlibi said Kobane's initiative “showed to the whole world that the SDF is a national force, one that protected all the components of the Syrian people and maintained Syria’s borders, economy and civil peace despite all the challenges, pressure and attacks from the Turkish and Syrian regimes.”