Khamenei calls on Iranians to participate in parliamentary vote

Iran's supreme leader urged the people of Iran to vote in the upcoming parliamentary election out of duty to their nation as President Hassan Rouhani warned about the concentration of power in the country. 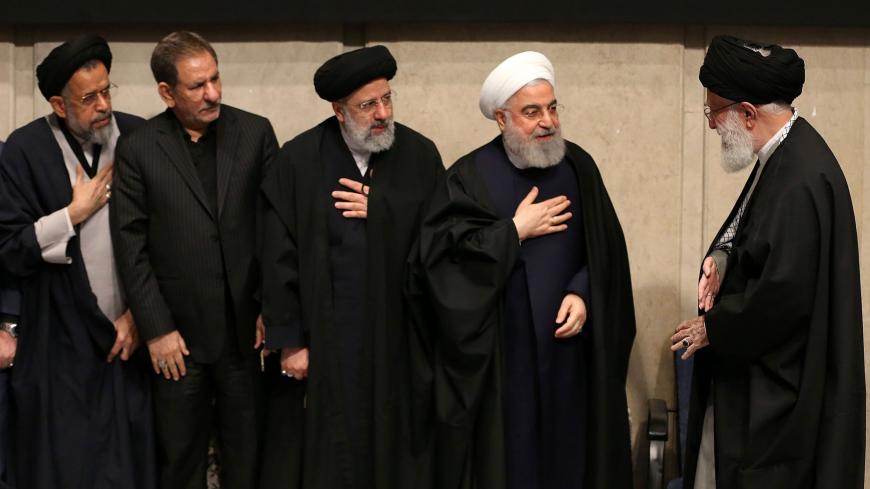 Yesterday Iran’s Supreme Leader Ayatollah Ali Khamenei urged a large turnout on the upcoming parliamentary elections in what was possibly his final speech before the election in two weeks. The run-up to the election has not been without controversy, however, as the fight between President Hassan Rouhani and Khamenei behind the scenes has spilled into the public.

Khamenei, as he has done before, urged even those who do not favor him to vote out of duty to their country, an odd pitch for a man who has been at the helm of power for three decades. Rouhani, who addressed his cabinet the same day Khamenei made his speech, made just a few comments about the elections but not so subtly warned about the concentration of power. “No one is higher than the law and the people,” Rouhani said. “Let’s not think we are a small group who can guide public opinion and that if we were not here the people would be lost. No, the people know well and they choose well.”

Rouhani continued, “Islam is based on the people’s vote; the people must choose.”

The conservative Guardian Council has disqualified the majority of Reformist and moderate candidates from running in the election and some of the most outspoken members of parliament, such as Ali Motahhari, have been inexplicably sidelined. The supreme leader directly chooses six members of the 12-member Guardian Council. The head of the judiciary, who is chosen by the supreme leader, nominates the others and their nominations are approved by parliament.

Many observers have compared the round of disqualifications to the 2004 mass disqualifications that led to mass resignations and the end of Reformist dominance in politics and ultimately the ushering in of hard-line President Mahmoud Ahmadinejad in 2005. While the two situations are not exactly the same, they have a number of similarities. It seems clear that conservatives and hard-liners see themselves as proven right that negotiations and compromise with the United States and the West have led to a dead end and believe that what the country needs now is a parliament and eventually a president who has a inwardly and eastern (China and Russia) outlook on geopolitics. In 2013, Rouhani campaigned and largely won on being an antidote to Ahmadinejad’s policies and promising to negotiate with the West and strike a nuclear deal. While the next presidential elections are still far off and many factors will be added to Iran’s calculations between now and June 2021, today’s parliamentary disqualifications signal the rejection of nominal Reformists and even moderates by the conservative bodies that control the levers of power in the Islamic Republic.

While parliamentary elections have been relatively quiet in comparison to presidential elections, there will still be a decent-sized turnout because the parliamentary vote is one of the few ways to address local issues. There are 290 seats in parliament and voters understand that electing a capable representative is a way to bring local and provincial issues to the national stage and get them addressed.