"For Sama," a documentary depicting the struggle of a Aleppan mother and journalist, has won BAFTA's award for best documentary and is now in the running for an Oscar. 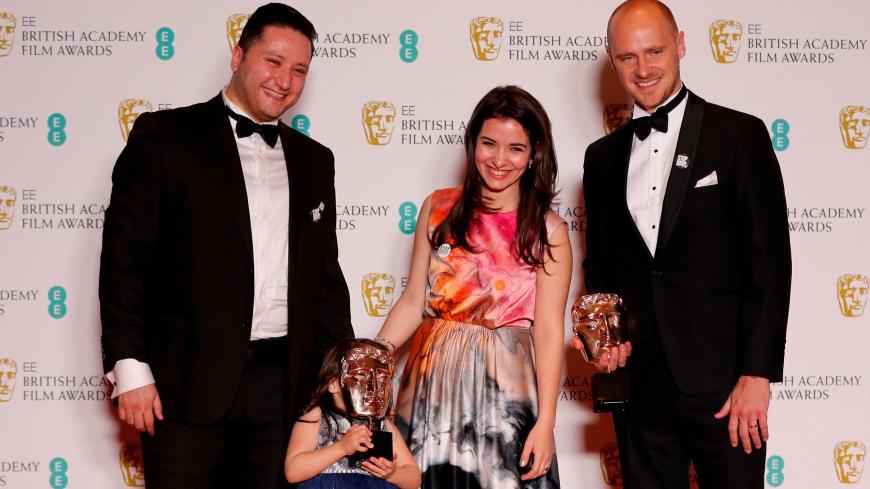 (L-R) Hamza al-Kateab and Syrian filmmaker Waad al-Kateab pose with their daughter, Sama, and British filmmaker Edward Watts upon receiving their awards for the documentary "For Sama" at the British Academy Film Awards at the Royal Albert Hall in London, Feb. 2, 2020. - ADRIAN DENNIS/AFP via Getty Images

“For Sama,” a documentary that depicts an Aleppan mother's struggle to raise her daughter amid the Syrian war, won the best documentary award at the British Academy of Film and Television Arts (BAFTA). The modest-budget film is also one of the few from the Middle East to make the 2020 Academy Awards' short list for best documentary.

“I take this award for the great Syrian people who are still suffering; and to the great heroes — the doctors, nurses, humanitarian workers and volunteers,” said Channel 4 News journalist Waad al-Kateab, the film's co-director and main character, at the awards ceremony Feb. 2. Kateab attended the ceremony in London with her daughter, Sama, the documentary's namesake, and her husband, surgeon Hamza al-Kateab.

She also recalled a dark moment in the war-torn city of Aleppo four years ago. “In 2016, we were at the basement of a hospital" being shelled. "At one point, we discussed with Channel 4 News where we could bury the footage so if we did not survive, it would not be lost.”

The documentary, co-directed by Kateab and Edward Watts, is based on Kateab’s own story in Aleppo between 2011-2016. She falls in love with a surgeon, Dr. Hamza al-Kateab, marries him in a cramped hospital room and eventually gives birth to their daughter, Sama. Her personal story runs in parallel with what happens to the city in those five years — starting with demonstrations at the universities calling for the Syrian revolution, the siege of Aleppo, the misery as the rebels and the government forces clashed in the city and its surroundings and displacement by President Bashar al-Assad’s regime, which pushed the rebels north toward the Syrian-Turkish border by the end of 2016.

The documentary has already swept up international awards such as the Cannes Golden Eye, a considerable achievement given that it basically rested on the efforts of a single person. Kateab wrote the script, narrated it with her own voice and cut some 500 hours of filming to 100 minutes with Watts' help.

The scenes range from news footage of demonstrations at Aleppo University to deeply personal shots such as the modest marriage ceremony and Kateab’s talks with Sama, who was barely speaking, on motherhood, love and fear.

“I wanted to convey that what happened in my country was not a civil war but a revolution against oppression,” Kateab told Al-Monitor. “What we witnessed in Aleppo was death itself, not a close brush with death.”

She added that if she had to start all over again, she and many of her friends would do as they had, meaning stay and fight. “Many people have faith in freedom and revolution and if we turn back the clock and put them under the same conditions, they would still resist until their last breath,” she said.

Kateab, who started to film what was going on in Aleppo as a citizen journalist before she started working in the press, said she dreamed of turning her footage into a film that would reach audiences across the globe, but was not sure she could make a documentary and release it by herself.

Now the film is shown in festivals and cinemas around the world. She said, “We tried to tell viewers that the same scenes are being reproduced every day in other Syrian towns. Schools, hospitals and bakeries are shelled in Idlib and its neighboring towns. People want to know more about what is happening in Syria, which makes me happy,” she said.

In one of the scenes her husband, who leads a medical team in Al Quds hospital, was seen standing among dead bodies and heavily injured people, trying to look calm and contained. In another, he asked his wife whether it would be better to keep Sama at the hospital, which was surrounded by the forces of the Assad regime.

“When I asked Waad to leave Sama at the hospital once the regime got to us, I was hoping that they would not touch her because she was a child,” he told Al-Monitor. “We, the grown-ups, were doomed to be arrested and killed. But my hope as a father was that my child would survive and not be tortured like others.”

He admitted that he was shocked by some of the scenes in the documentary. “In the last year, 51 medical centers were shelled. Despite the risk and difficult circumstances, I had to be ready to work. It is not easy to stay mentally stable and positive in the face of some of the news that reaches the hospital and to keep up the morale of your team and patients. What is strange is that I don’t remember some scenes in the movie. I might have blocked them out of my memory.”

“When I see the scenes in the movie, my memory goes back far beyond them and to many others,” Hashem told Al-Monitor. “Every scene of the documentary — and those that are not in it — have left a mark on our lives, experience and struggle. The movie was a message to the world saying that we survived a massacre committed by the regime. We left our friends buried in Aleppo and the rest of Syria.”

The documentary is the first Syrian film to be shortlisted for an Academy Award for best documentary. But its production team is more concerned with getting their voices heard than winning awards.