An Israeli swimmer discovered a 3,400-year-old stone engraved with hieroglyphs last year, but some Egyptian experts have a hard time believing the story. 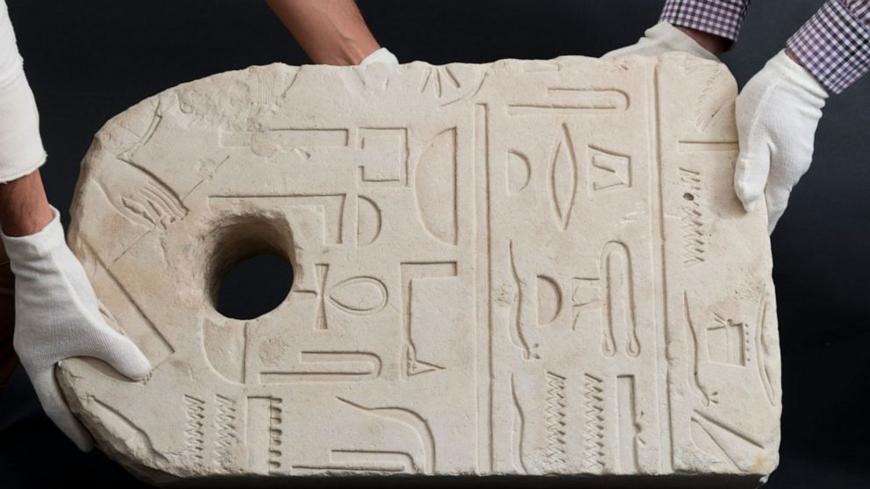 A 3,400-year-old Egyptian stone anchor engraved with hieroglyphs, said to have been discovered by a swimmer taking a dip off the coast of Israel.

CAIRO — An archaeological discovery does not always require months and years of research, imaging sonar or magnetometric scanning, drilling or sophisticated excavation tools. Occasionally, a passerby stumbles upon an artifact, just as an Israeli veterinarian claims he did, though some Egyptian experts claim that the whole story is a sham and the artifact was actually smuggled from Egypt.

The Israel Antiquities Authority said that the artifact is a granite stone depicting the ancient goddess Sechat. The hieroglyphs on the anchor date back to the 18th dynasty of Egypt (1550-1292 B.C.).

Experts quoted by the Israeli daily speculated that the piece may be part of a mural decorating a temple or a royal palace. It might have been later used as an anchor for a commercial ship transporting merchandise between ancient Egyptians and Canaanites inhabiting Palestine, Lebanon, West Jordan and Syria for thousands of years. This pushed Egyptians to “erase the picture of Sechat out of respect to the gods,” Haaretz reported.

Authorities on the Egyptian side agree with the narrative. Mohamed Abd El Maksoud, former general secretary of the Supreme Council of Antiquities, said in a Feb. 6 press statement, “The Egyptian artifact could have reached Israeli shores through commerce between ancient Egyptians and Canaanites.”

What makes the anchor interesting is that it might be the first hint at the existence of the sea trade between the ancient Egyptians and the people in Palestine.

Maksoud said that the trade between the Pharaonic era in Egypt and the Canaanite era in Palestine around 1500 B.C. was by land, initially via the Horus military route that extended from the Tell Habouh fortress in Qantarah, on the eastern side of the Suez Canal, and passes through the Sinai desert where the Egyptians built 12 fortresses in the 18th and 19th dynasties (1550-1189 B.C.) The route ends in the Gaza Strip and Rafah, Egypt, where the last Egyptian fortresses are found.

“This is based on a detailed map of the fortresses on one of the walls of Karnak Temple. Yet archaeological discoveries are ongoing and constantly change our information about the history of ancient Egypt,” Maksoud told Al-Monitor. "Although most historical references confirm that trade between the Egyptians and Canaanites was by land, nothing refutes the possibility of sea trade. The newly discovered artifact in Israel might be the first hint of sea trade, especially since ancient Egyptians knew how to build ships and fleets since the 4th dynasty.”

Adel El Sayed, a retired professor of Pharaonic history, however, said that the whole story of “the discovery while swimming" was suspicious. “Maksoud’s statements and those of the Israeli Antiquities Authority about the possibility of sea trade bringing the piece to Israel is logically and scientifically possible, but it ignores the difficulty of finding a sunken artifact 'by chance,'" he said.

He noted that a dense granite stone could not have floated to the level where it would be seen by a swimmer. “The stone should have also been blackened if it had really remained underwater for centuries," he said.

He added that it somehow did not quite seem right that ancient Egyptians would use a mural from a temple or a palace as an anchor, as they respected these sites too much and there was no shortage of granite to use for anchors.

"I would not be surprised if the piece was actually stolen from Egypt, and this narrative is being used so that the Egyptian authorities cannot claim it as it has done with other pieces," he told Al-Monitor.

The Egyptian Ministry of Antiquities repatriated 90 pieces in November 2013 from an auction house in Jerusalem after it attempted to sell the pieces in a public auction. Mohamed Ibrahim, the minister of antiquities at the time, told the local press then that Cairo had contacted the Israeli authorities as soon as they saw the Pharaonic pieces in the catalog of Arida Auction House. The auction was canceled and the auction house was asked to provide documents proving legitimate ownership. Because they could not prove this, the Israeli government returned the artifacts to Egypt.

According to the Egyptian Ministry of Antiquities, there are around 700 Egyptian artifacts across museums in Jerusalem. The same reports say that 91 of the 700 are under scrutiny, following the Egyptian request to have them returned. Several experts in Cairo told Al-Monitor that a good part of these 91 pieces had been acquired illegally when Israel occupied the Sinai Peninsula between 1967 and 1973. Another scenario is that they have been stolen from Egypt and smuggled to Israel.

Sayed said that the news of an Egyptian artifact being discovered on the shores of Haifa has started a debate among Egyptian archaeologists and historians. They wonder how the artifact got there and asked the Egyptian government to verify the Israeli narrative and find out if they were really found by mistake or if they were actually stolen.

“To verify the Israeli tale, Egypt has to send geologists, archaeologists and other experts to examine the piece. They need to verify that it has really been underwater all this time,” he said. “If the narrative proves to be false, the Egyptian authorities should start a procedure to have the piece repatriated.”

An anonymous source from the Ministry of Antiquities told Al-Monitor, “Examining the piece requires first and foremost approval from the Israeli authorities. The UNESCO agreement for the protection of cultural heritage does not oblige them [Israeli authorities] to allow the Egyptian authorities to examine the piece.”

The source noted that artifacts are classified under two different categories, saying, “The first category of artifacts are those that have been discovered and listed in the government registers or the UNESCO’s heritage registers, and then stolen from a museum or site. It is possible to request their repatriation since they are already documented in the country of original ownership. A good example of this category is the Egyptian artifacts stolen from Sinai between 1967 and 1973 and those auctioned in Jerusalem in 2013. The other category contains artifacts found by smugglers. Those are never registered [by Egypt], so Cairo cannot prove ownership and it is very difficult to ask for their repatriation.” The source added that the recently discovered anchor possibly falls in the second category.