Egypt builds a wall on border with Gaza

As part of the measures Egyptian authorities have taken to boost border security, including the construction of a border wall, an Egyptian security delegation conducted a field inspection along the Egypt-Gaza border. 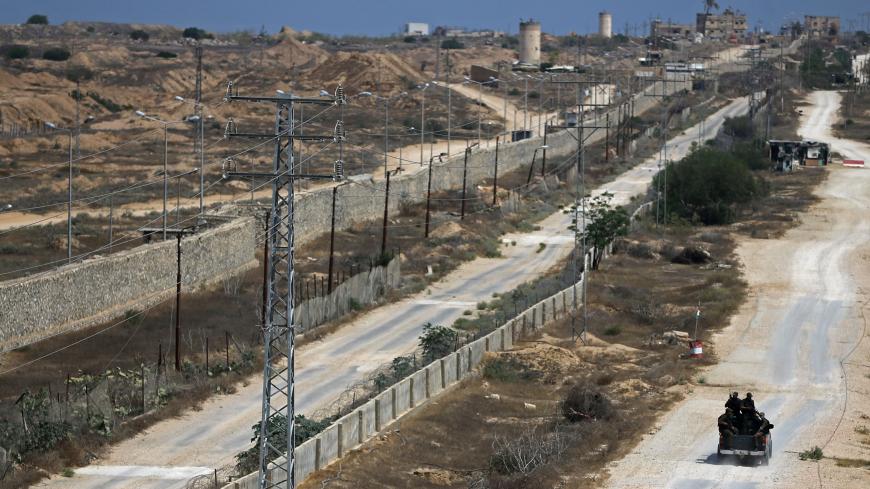 Speaking to Al-Monitor on condition of anonymity, tribal sources in the northern Sinai Peninsula stated that on Jan. 27 Egyptian armed forces embarked on the first phase of building a 2-kilometer-long barrier on the border with the Gaza Strip, starting from the Kerem Shalom crossing to the Rafah border crossing. Such a step went unannounced by the Egyptian armed forces, the sources added.

They explained that the 6-meter-high barrier is made of reinforced concrete and goes 5 meters under the ground. It consists of a second barrier parallel to the old rock barrier built in early 2008 on the border with the Gaza Strip, separated by a distance not exceeding 10 meters. The barrier is designed to block the entry of gunmen from the Gaza Strip into Sinai and shut down the remaining Palestinian cross-border tunnels.

The sources said the second and last phase involves building the barrier along unspecified segments of the border that Egyptian armed forces appraise as vulnerable or where underground tunnels are suspected. The sources anticipate completion of the barrier would drag out until mid-2020.

Maan News quoted Egyptian security sources as saying that “the tunnel serves as [an underground means] for the infiltration of terrorists from the Gaza Strip, planting [roadside bombs] in the Egyptian side, pushing terrorist [Islamic State] supporters to Sinai, and for the transfer of arms and explosives. Ammunition and explosives were seized in the tunnel.”

Egyptian armed forces announced having discovered the tunnel a few hours after five Egyptian soldiers were killed and others were wounded Feb. 3 in a roadside bomb south of the town of Sheikh Zuweid, which borders the Gaza Strip.

Such an Egyptian policy managed to close and destroy hundreds of border underground tunnels and caused Hamas a stifling financial crisis that has been ongoing to date.

The recent developments on the border coincided with US President Donald Trump announcing Jan. 28 his Mideast peace plan, which assigns to the Palestinians new lands adjacent to Sinai in Israel.

Mohammed Abu Harbeed, an expert on security affairs at the Interior Ministry in the Gaza Strip, told Al-Monitor, “The construction of this barrier was highly coordinated with Hamas and the Gaza Interior Ministry. It is designed to bring about better security on [both] sides of the border.”

He explained that all of the security measures Egyptian authorities made, including building the barrier, serve the interests of both sides. Ending contraband, including the smuggling of drugs from Sinai to the Gaza Strip, and preventing the infiltration of extremists from and into the Gaza Strip are what Hamas seeks as well, Abu Harbeed added.

He did not find it strange that Egyptian armed forces discovered a Palestinian tunnel on the border with the Gaza Strip. “Prior to the Egyptian army’s crackdown on the tunnels in October 2014, there were hundreds of tunnels underneath the Egyptian-Palestinian border — some of which were wide enough for the smuggling of cars. Yet the number of tunnels has become small following the Egyptian crackdown. The [remaining] tunnels are unknown and are run by individuals who are smuggling goods from Egypt to the Gaza Strip with the intent to evade customs duties or contraband such as drugs,” said Abu Harbeed.

He affirmed that the Gaza Interior Ministry does not see a need for these tunnels as long as Egypt opens the Rafah border crossing to Gazans, adding that the ministry is preventing any attempt to dig any new tunnels.

Iyad al-Qara, a political analyst and journalist for the Hamas-affiliated Felesteen newspaper in Gaza, told Al-Monitor that “in the past years, Hamas worked on boosting security on the border with Egypt, deploying dozens of its members and a series of observation towers and surveillance cameras mounted on the towers along the border to prevent infiltration attempts from the Gaza Strip into Egypt.”

Qara perceived that the Egyptian and Palestinian sides agreed on the construction of the barrier at their meetings in early 2018, noting that the arrival of an Egyptian security delegation in the Gaza Strip to inspect the border at this time points to this agreement.

He indicated that Hamas in the Gaza Strip has great interest in securing the border with Egypt “because bringing about security in Sinai will be positively reflected on the Gazan security.”

Talal Okal, a political writer for the West Bank-based newspaper Al-Ayyam, told Al-Monitor that Hamas hears the Egyptian concerns about the infiltration of extremists from the Gaza Strip into Sinai. He said this is particularly true since such extremists do not find the Gaza Strip to be a favorable environment, given that Hamas opposes the presence of extremist organizations that have religious motives behind espousing conflicts.