Death on the Nile takes a digital turn

It has been 13 years since Hend Gamal stood beside her father’s deathbed, not knowing what to do, her teenage emotions overwhelmed by grief, shock and confusion. A mental image of the “hardest moment in her life” still runs through her head. “I had never thought I would lose him,” Gamal said. “Few people are prepared for such a moment.”

Gamal still recalls the bustle and blur as she tried to obtain a burial permit and organize her father's funeral. “I was a mere 18,” Gamal said. “My fear of being alone was coupled with the sheer horror of not knowing what to do now that he was dead, how to bury him.”

She quickly discovered how financially costly the death of a relative can be, as many people sought to overcharge her for services when they recognized her inexperience and realized that she was on her own. Gamal's mother had died when she was a child, and after that she had lived alone with her father.

Today people who find themselves in need of guidance like Gamal can turn to two online platforms that offer assistance with “afterlife services.” Among the services and items provided are a ghusl (the full-body wash required by Islam and done by “hanoutis,” or undertakers, or by family members), shrouds and coffins.

One such business, Sokna, established in 2018, ensures that religious rites are properly followed, from ghusl to burial, and also provides for the transfer of the body from the location of death. 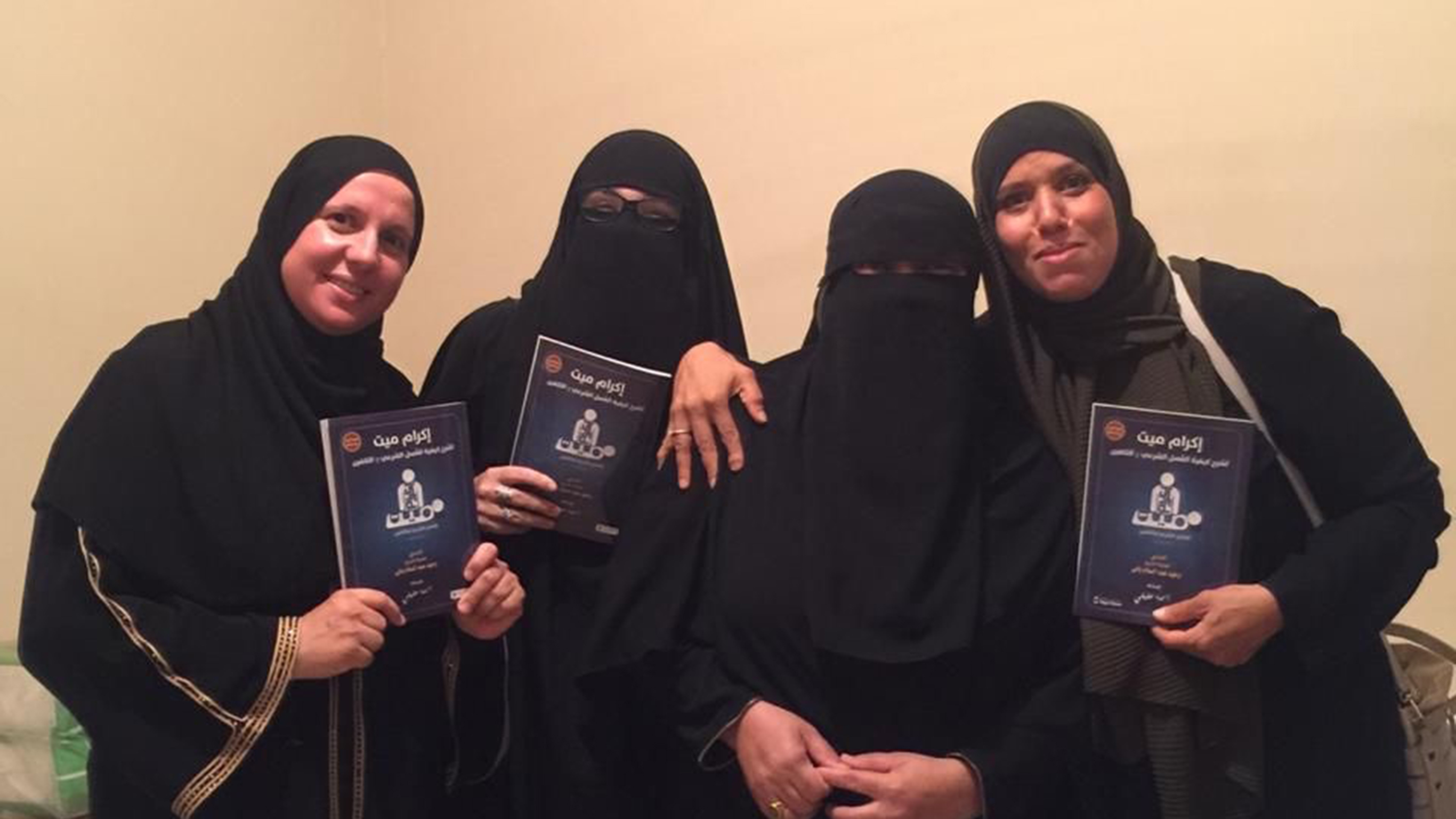 Volunteers with Ikram Mayet, which provides afterlife services for women, holding a book by Asmaa Afifi on the Islamic ritual of washing the bodies of the deceased, 2019

Ahmed Gaballah, an Egyptian American who lives in the United States, founded Sokna after he was informed in 2016 that he had potentially fatal pancreatitis. Young and healthy, Gaballah had not thought about his own death until then, but with his diagnosis and prognosis, he realized that he wanted to be buried in his home country. His wish was a worrying prospect, given that funerals in Egypt tended to be difficult and costly for families.

“I thought that if I could change only one thing before I died, it would be funeral services,” said Gaballah, who studied computer science at the American University in Cairo. He survived and returned to Egypt to start Sokna, Arabic for peace, tranquility or calm.

“We are more than an online platform,” Gaballah said. “We help organize funerals and provide support for the family of the deceased. Technology is a facilitator, but you need to be there physically to solve problems.”

Before launching Sokna, Gaballah and his team researched afterlife services in other countries, including the United States, Singapore, Malaysia and Thailand, to identify best practices so they could offer the same in Egypt. “Our main aim is to help families feel at peace and at ease at such a difficult moment,” Gaballah said.

“Our team has trained with sheikhs from Al-Azhar to learn how to wash the deceased according to Islam,” he explained. “We also trained with churches so we would understand Christian burial rites.”

Once the team receives a request on Sokna's Facebook page or website or by phone, six to eight members head to the location of the deceased, toting gloves, face masks and overshoes. The team leader explains procedures to the family and assigns duties to team members. Their tasks include washing the body, renting funeral halls and preparing the burial plot. The total cost ranges between 5,000 and 7,000 Egyptian pounds ($300-450) in Cairo, the organization’s base.

Ahmed Hamdy, who succeeded his father as a hanouti, is unsure how long he will be able to continue in the profession. “I’ve been washing the bodies of the dead for over 25 years,” he said. “In the past, there were only a few hanouti offices operating, but now there are many hanoutis in addition to online platforms, so the competition is stiff, and I don’t know how we can survive.”

With a strong online presence and a multi-functional team on the ground, Sokna could indeed prove to be strong competition for local undertakers, but Gaballah said that Sokna aims to help local undertakers, not compete with them.

“We want to improve society’s attitude toward the hanouti, because many look down on them,” Gaballah said. “We build partnerships with them. Some of them work for us and give us ideas, and we give them training and help them generate income.” 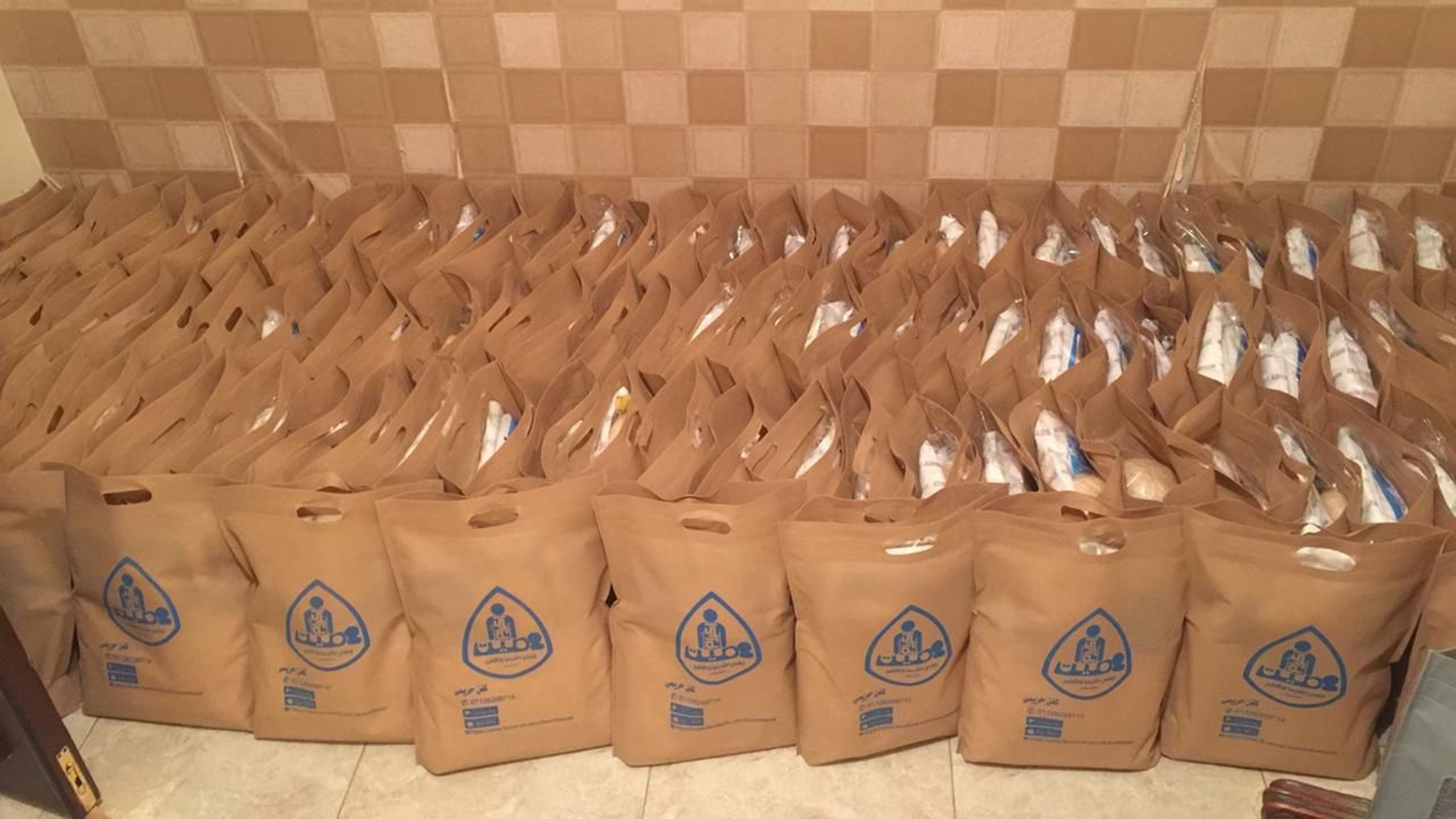 Shrouds made by Asmaa Afifi, who developed Ikram Mayet, an app for accessing afterlife services for women.

Asmaa Afifi, a mother of three, launched the mobile app Ikram Mayet, which translates as “honoring the dead.” Through it, Afifi offers gusl and shrouding for women, by women. People seeking her organizations' help are put in touch with the nearest Ikram Mayet volunteer, all of whom Afifi trains herself. Unlike Sokna, Ikram Mayet provides services free of charge.

Afifi’s mother had died when Afifi was 19. “I wanted to wash my mother, but I did not know how,” she said. “After her death, I learned how and started volunteering to wash the dead.” Afifi also trained other women on the Islamic ritual of washing the dead.

“I used to work alone, but I found that my mobile never stopped ringing, so I thought about developing a mobile app,” said Afifi, who studied computer science and launched her app through donations. “Our volunteers are women who are well-educated and presentable. We do not accept tips or payment. We only do it for ‘thawab’ [God’s reward].” According to one hadith — the words and deeds of Prophet Muhammad that provide guidance on what Islam permits — Allah grants forgiveness to those who wash the dead and remain discreet about it.

Regardless of any divine rewards, some customers and friends of Afifi and Gaballah view their work as gloomy. This perception doesn't bother the two, who view their jobs as valuable and meaningful.

“Life is a journey, and it’s up to you how you live it,” Gaballah said. “If you don’t follow your passion, life will become boring and without meaning.”