Over 3,000 women participated in a gathering to celebrate the completion of a seven and a half years of Talmud study put on by the Hadran association, dedicated to make practice inclusive of women. 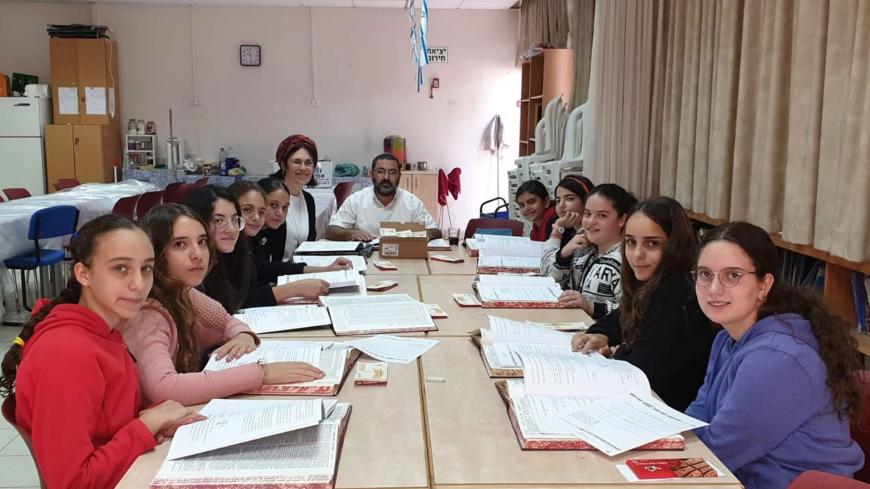 Girls take part in a Talmud study group with the Hadran organization in a photo uploaded Dec. 11, 2019. - Facebook/hadranwomen

The website of the Hadran group features a big picture of a female officer of the Israel Defense Forces poring over a Talmud tome. “This is the entire Torah, the entire principle of all,” said Rabbanit Michelle Farber Cohen, the co-founder of the group and the initiator of the Jan. 5 gathering to mark the completion of a cycle of Talmud study by women in the Jerusalem Convention Center. “We are educating women to participate in and contribute to every field, including those that were once closed to us.”

The Talmud was compiled after the destruction of the Second Jerusalem Temple in 70 AD. It is a collection of complex interpretations of the Torah and Jewish law, put together both in Babylon (Babylonian Talmud, compiled in what is now Iraq by about 500 AD) and in the Land of Israel (Jerusalem Talmud, completed about 200 years earlier).

The 37 tractates of the Babylonian Talmud are considered the foundation stone of halachic Jewish literature. About a century ago, in 1923, Rabbi Meir Shapira of Lublin instituted the Daf Yomi cycle, in which one page of the Talmud is studied daily across the Jewish world, completing a cycle every seven and a half years. Celebrations to mark the completion of the cycle are held around the world.

Until recently, only men participated in this tradition and celebrated the completion of the cycle. “Men didn’t want to share their exclusive authority with women. The study of the Talmud is empowering. It makes it possible to gain authority as a rabbi and a religious judge, among other things,” Rachel Elior, a professor of Jewish thought and philosophy at the Hebrew University in Jerusalem, told Al-Monitor.

Young Americans who immigrated to Israel in the 1970s pioneered women studying the Talmud and established Midreshet Bruriah, the women’s equivalent to post-high school yeshivas for men. The “midrasha” — now called Midreshet Lindenbaum — was soon joined by top religious schools and liberal religious organizations such as Kolech, an organization of religious Jewish feminists. They instituted Talmud study for women in various forms. Their efforts eventually resulted in the ordination of Orthodox women as rabbis and halachic authorities, who now serve as a resource for questions on matters of religion.

Hadran was founded in 2018 by several Orthodox women who advocated making Talmud study accessible to women, with the goal of greater religious authority for women.

“We aim to inspire Jewish women’s interest in learning Talmud, providing them with unique, practical, women-taught resources to advance their learning at all levels and at their own pace,” reads its website. “We are living in a remarkable time in Jewish history, a time when women learning and teaching Torah at high levels is almost commonplace. Talmud, however, remains more in the purview of men. Hadran’s goal is to change the paradigm, offering women at all levels of knowledge the tools they need to study Talmud, at their own pace and whatever way suits them — whether in a class, as part of a chavruta [study partnership], or on their own. In addition, by providing support in the voice of female teachers, Hadran hopes to provide role models that advance the status of women in the world of Talmud.”

The Jan. 5 gathering in Jerusalem, attended by over 3,000 women, was a show of power and strength by religious women from almost every social sector, ranging from relatively liberal ultra-Orthodox women to women associated with the conservative movement. Some wore headscarves, while others walked around in jeans and t-shirts. The term “feminism” was conspicuously absent. On the contrary, the organizers wanted to send the message that Talmud study is not the result of a struggle but the natural continuation of a legacy of Torah study across Jewish history.

The opening video portrayed women studying the Talmud as continuing in the tradition of Bruriah, a 2nd century sage from the early Talmudic period who is often considered the first learned Jewish woman. Rabbanit Farber Cohen, the keynote speaker of the event, sketched out the historical progression as it affected her own life: “We have three sets of Talmud in my home. The first belonged to my grandfather. In his day, it was obvious that only men study. My husband and I received the second set as a wedding gift, and we studied it together. The third set represents the future. It is the set of Talmud that we gave our daughter about a year ago. Today it is obvious that any woman can study Talmud. Women in our world have made major progress in academia and all other aspects of life. It is important that they also understand the intellectual depth of Torah study and Judaism.”

Nevertheless, mainstream Orthodox Judaism still believes that Talmud study is the exclusive legacy of men. The director of religious education in the Ministry of Education did not provide any funding for the event in Jerusalem, though the department funds similar events for men.

Academies for young religious women were also present. Many of them advocate military service for women, even those the idea runs counter to the positions of more conservative rabbis. Rabbi Ohad Toharlev, chairman of the executive committee of the Forum of Midrashot, critiqued this conservatism at the gathering. “This is a day that gives voice to the empowerment of women, both in Torah and in service to the country. The time has come to remove the internal guardsman from the study hall and grant access to anyone who wants to come and study Torah,” he said.

What about the ultra-Orthodox community? Dozens of ultra-Orthodox women from the more liberal circles of the sector attended the event, indicating that change, though slow, is taking place even among the more traditional elements of Judaism.

The company organizing the event explained, “For seven years, women made sure that their husbands would be able to read the daily page of Talmud day after day, and they did so calmly and without harassing them. That is why it is so important to gather the ultra-Orthodox women to thank them and to give them the strength to carry on with what they are doing well into the future.”

Despite these and other advancements, ultra-Orthodox women still have a long way to go before they are widely supported in studying the Talmud.