Israel support for yeshiva students up by 53%. Is it enough?

Once again, much is being made in the media about the state raising allocations for yeshiva students, but the ebb and flow of this funding is a perennial part of the coalition's wooing of the ultra-Orthodox. 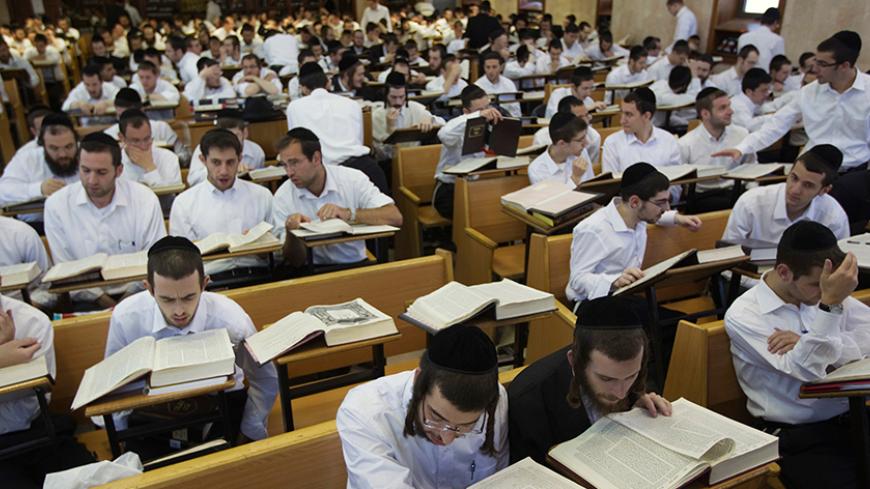 With the approval of the state budget for 2015-16 and in accordance with the coalition agreements between the Likud and ultra-Orthodox parties, budgetary funding allocated to yeshivas (seminaries for single men) and kollels (for married men) grew significantly this year. That funding had previously been cut by the last government due to pressure from Yesh Atid.

The budget for yeshivas and kollels includes a monthly subsistence stipend for students. This sum grew from 310 shekels ($78) per month (in January 2015) to 477 shekels ($120), while funding for kollel students increased from 558 shekels ($140) per month to 858 shekels ($215). The ultra-Orthodox parties also succeeded in establishing a new precedent by having these stipends paid retroactively, dating back to January 2015. As a result, yeshiva students received a one-time compensatory grant of 1,477 shekels ($317), while kollel students received a similar grant of 2,658 shekels ($668).

The yeshiva and kollel system is the hub around which the entire ultra-Orthodox sector revolves. At age 13, virtually every male ultra-Orthodox Israeli enters this system. He will remain immersed in his yeshiva studies until about the age of 20, when he will get married and continue his studies in a kollel. According to data provided by the Central Bureau of Statistics, there were some 83,000 kollel students in Israel in the 2013-14 academic year. Most of these will pursue their religious studies for one to three years, and then leave the kollel to join the workforce. A minority will opt to continue their studies.

While most kollels follow an identical regimen of study, they can be distinguished by their distinct focus and approach to learning. They are mainly divided into schools that focus on the Babylonian Talmud (the teachings of Jewish sages from the third through the fifth centuries) and ones that focus on the Shulhan Aruch (a compendium of Jewish law dating from the 15th century). Among those kollels that focus on the Babylonian Talmud, there is a subgroup that applies the classical approach to studying the text page by page, and another subgroup that focuses on the in-depth study of Talmudic topics. The second subgroup is considered more prestigious. Similarly, there are different types of kollels that emphasize Jewish law. Some concentrate on the core laws of the Sabbath, kosher food and family law, while others focus on more advanced studies of torts and other subjects to qualify their students for ordination as rabbis and as judges in religious courts. This subgroup, too, is considered especially prestigious. Then there are a handful of kollels, particularly older, more established institutions, that practice a freestyle type of study without any uniform focus or guidelines.

Kollel students receive an average of 2,000 shekels ($500) per month for committing to a full day of kollel study (from 9 a.m. to 1:30 p.m., and again from 4 p.m. to 7 p.m.). In its heyday, state support covered about half of this sum, with the rest being raised by the kollels’ directors, mainly from overseas donors. The majority of kollels maintain strict attendance policies, with students paying a few dozen shekels in fines every time they are late. Successfully passing a weekly test is rewarded by a financial bonus of about a hundred shekels ($25).

“Studying in kollel is a choice. You might even say it is a difficult choice,” Chaim Steiner tells Al-Monitor. Steiner, a 27-year-old father of twins, is a kollel student from Beitar Illit. “My family and I pay a steep financial and personal price for it. Even the most basic job that pays minimum wage would earn me at least twice what I make at the kollel, but I see a special value in Torah study and in sharing the knowledge with future generations. It isn’t always easy, but I constantly keep this goal in front of me.”

Steiner believes that the state should provide significantly more support to kollel students. “Studying Torah is our culture, our sport, our education. We pay taxes so we deserve to receive funding to support our cultural values. I don’t accept the argument that Torah study isn't productive. Large swathes of academia don’t necessarily create anything either, but they are nonetheless important, according to a different set of values. We consider Torah study to be a value, and much more than that. I consider it to be the secret of Jewish continuity.”

Shahar Ilan, the deputy director of the organization Hiddush: For Religious Freedom and Equality, says that while the study itself is not a problem, he calls government funding for it “a disaster for the State of Israel." He argues, "There is nothing in Jewish history that compares to this society of learners. It is very serious and very dangerous for us to encourage ultra-Orthodox men to remain in kollels. It causes enormous harm to the economy.” Ilan rejects the argument that the ultra-Orthodox have the right to request funding equal to that received by the universities. “If the kollels want to receive an academic budget, then they should operate in an organized academic manner, meeting academic standards and student requirements, as would be expected of them in academia.” He also notes that unlike kollel students, who are paid for their studies, university students actually pay to attend classes.

Nevertheless, it should be noted that the state’s university investment per student is four times higher than its investment in yeshivas per student. According to an investigative report published by the ultra-Orthodox newspaper HaMevaser, the government invests approximately 40,000 shekels ($10,000) in every university student in Israel, whereas investment in each yeshiva student reaches about 10,000 shekels ($2,500) per year at the very most.

The conflict over kollels and their budgets has been part of the Israeli civil discourse for decades, becoming a tool in the hands of governments and politicians. Governments that want to purchase ultra-Orthodox support increase the budgets of the yeshivas, while parties hoping to buy the support of the general population cut them. Caught in the crossfire are tens of thousands of yeshiva and kollel students directly impacted by the frequent political reversals so characteristic of the Israeli political systems. That is why ultra-Orthodox politicians have been fighting for years to make the yeshiva budget a permanent component of the general budget, and it is also why Israeli politicians will never let that happen. After all, if they agree to such an arrangement, they will no longer be able to buy ultra-Orthodox support for each coalition.