US questions whether Iraq can boot American troops

After Iraq's parliament urged US troops to leave the country Sunday, the White House and some Iraqi lawmakers are raising questions about whether Iraq's caretaker prime minister has the authority to kick out US forces. 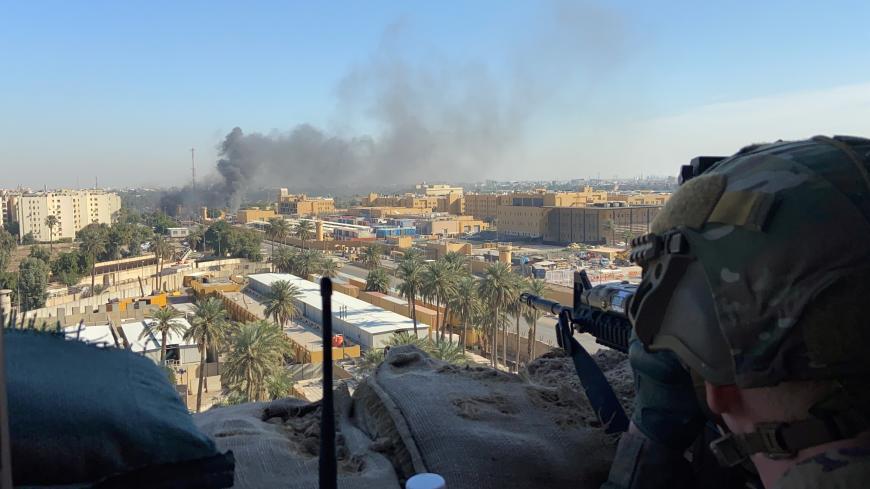 The Donald Trump administration and Iraqi lawmakers are raising questions about whether Baghdad’s caretaker prime minister has the authority to kick out US forces after parliament urged American troops to leave in a vote this weekend.

Iraqi caretaker Prime Minister Adel Abdul Mahdi, who resigned in November amid anti-government protests, backed the parliamentary vote that urged Iraq to expel 5,200 US troops who are in the country to fight the Islamic State (IS).

But despite Abdul Mahdi’s protests, top Trump administration officials such as Defense Secretary Mark Esper have repeatedly questioned the legitimacy of the vote and the sitting Iraqi government, arguing that the poll was manipulated by intimidation of Shiite lawmakers from Iran-backed groups and doesn’t reflect the will of the Iraqi people.

“As you know, most Kurds and most Sunnis did not show and those Shiites who did vote, many of them voted at the threat of their own lives by Shiite militia groups,” Esper said at a Pentagon briefing today. “Even in the last few days we still see Iraqis on the streets protesting their government due to corruption and the malign influence of Iran.”

Asked what would constitute a binding order for US troops to leave, Esper said, "I think that's a great question for the Iraqi prime minister." The vote, he said, “shows the support” of most Iraqis for the presence of US troops.

The Pentagon chief said he had not received a request from Abdul Mahdi to withdraw US forces, despite the prime minister’s insistence that a letter sent from the American commander of forces in Iraq, which Pentagon officials insist was an unsigned draft, indicated US forces would leave.

Yet the administration’s pushback against the prime minister’s calls for the United States to leave and to raise questions about the legitimacy of the government would represent a reversal. The Pentagon has previously argued that the United States is in Iraq to fight IS at the invitation of the government. The US-led coalition temporarily suspended the mission over the weekend as suspected Iran-backed rocket attacks struck near Iraqi bases housing coalition troops.

“At some point we want to get out. But this isn't the right point,” President Trump said in the Oval Office today. "I think it's the worst thing that could happen to Iraq if we leave."

Privately, Trump also appeared ready to threaten Iraq to keep American troops in the country after the vote, as The Washington Post reported Monday that the United States had begun drafting sanctions that could be applied if American troops are expelled.

Some Iraqi parliamentarians who did not participate in Sunday’s vote also disputed whether Abdul Mahdi, who is only staying on until a successor is named, had the authority to kick US forces out of the country.

“I think Abdul Mahdi is talking about a document that was leaked and will not reach the Iraqi government officially,” said Rehan Hanna Ayoub, a deputy in the Iraqi parliament council and a member of the foreign relations committee, referring to the US commander's letter. “Adel is the caretaker of the daily business and has no power to repeal and conclude agreements.”

The US presence in Iraq is based on an exchange of diplomatic letters between the two governments, a senior defense official said last week. American forces originally redeployed to the country in 2014 after the IS advance into northern Iraq threatened the US Consulate in Erbil.

On Monday, before the draft letter leaked publicly, Abdul Mahdi asked US Ambassador to Iraq Matthew Tueller to come up with a timeline for the removal of American forces. A US defense official told Al-Monitor that there was no timeline for American forces to withdraw, and other Iraqi officials insisted the US letter was a draft to be discussed that should not have leaked.

“He [Abdul Mahdi] has no power to do that,” said Sarkawt Shams, a member of Iraq’s parliament who attended Sunday’s session. “He even doesn’t have [the power] to send [a] budget bill.”

Experts say that many aspects of Iraq’s 2005 constitution that were supposed to be settled by lawmakers remain unresolved, which could be deepening questions about Abdul Mahdi’s authority to expel American forces.

Yet if the United States were to stay against the will of the Iraqi government after Abdul Mahdi’s calls for forces to leave, it could be forced to come up with a different legal explanation for keeping troops in the country, such as American self-defense, which might not hold up.

“That’s a complete change of what US troops are doing there. That’s shifting entirely their mission set for being there,” said Scott Anderson, a former State Department official in Iraq during the Barack Obama administration. "I think you’re stuck in an area where you’re not supposed to be there without Iraqi consent."