How Moscow is positioning itself as broker amid Mideast tensions 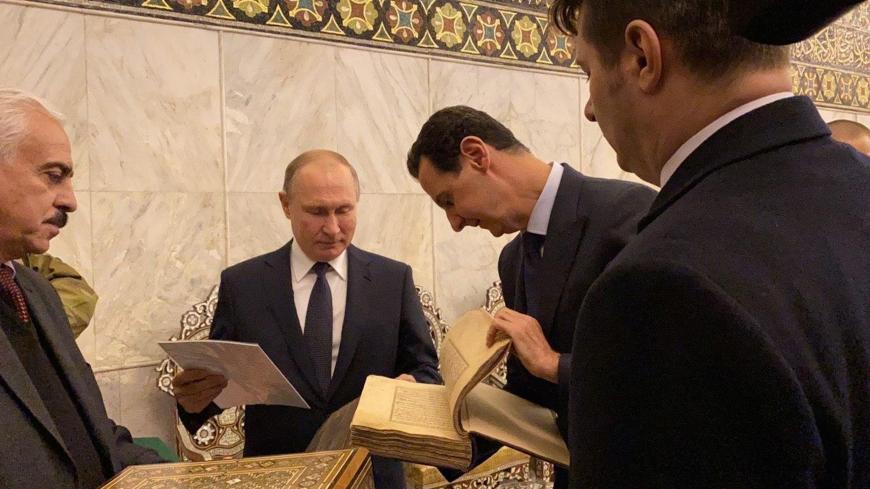 Russian President Vladimir Putin is seen with Syria's President Bashar al-Assad at Umayyad Mosque, in Damascus, Syria, in this handout released by SANA on Jan. 7, 2020. - SANA/Handout via REUTERS

On Jan. 7, Russia’s President Vladimir Putin made a snap visit to Syria. Putin proceeded from the Damascus airport to the command post of the Russian forces, where he was welcomed by Syrian President Bashar al-Assad.

According to Kremlin spokesperson Dmitry Peskov, the two presidents listened to reports from their militaries about the ongoing situations in different parts of Syria.

The presidents later held a bilateral meeting where, according to Peskov, Putin noted to Assad that “one can be safe to say a long way has been covered in the restoration of Syrian statehood and territorial integrity.”

“[The president] noted that sparks of restoring life are observable in Damascus,” Peskov added.

In turn, Assad thanked Putin for the visit and expressed appreciation for Russia’s help “in the fight against terrorism and restoration of peaceful life.”

Assad also sent along warm wishes to Putin and the Russian people for the Christmas holiday, Peskov stressed. The majority of Russians identify as Orthodox Christians, and accordingly celebrate Christmas Jan. 7, coinciding with the visit.

“Putin will also visit a few other facilities while in Syria,” Peskov said, without detailing what these are.

Putin’s visit comes at a critical time of growing regional tensions following the US strikes that killed the top Iranian general, Quds Force Cmdr. Qasem Soleimani. On Jan. 8, Putin will head to Turkey for talks with Turkish President Recep Tayyip Erdogan, where the two have a busy agenda on Syria, including the situation in Idlib and east of Euphrates River as well as Libya, where Russian mercenaries and Turkish troops are fighting for opposing camps.

Putin’s Syria visit, hence, has special meaning against the background of these two contexts.

The Russian president kept mum on the regional escalations for over a week and now seems to have seized the moment by setting the stage to reassert Moscow as a key mediator and security provider for the region.

The Putin-style shuttle diplomacy between Turkey and Syria may reveal its results tomorrow when Putin lands in Istanbul. While consulting with Damascus before any contact with Assad’s enemies — be it Erdogan or Israeli Prime Minister Benjamin Netanyahu — is a norm in Russian diplomacy, the fact that Putin himself is doing it this time may mean Moscow is up to some significant initiative and is serious about having it materialize.

As for the Iranian angle, on Jan. 6, Russia’s Defense Minister Sergei Shoigu spoke over the phone with Iran's chief of staff, Maj. Gen. Mohammad Bagheri. The top military officials discussed de-escalation measures in Syria and the broader Middle East following the killing of Soleimani.

Iran, Russia and China just wrapped up joint naval drills in the Indian Ocean and the Gulf of Oman.

In the stream of reactions from Moscow, Russia’s Defense Ministry issued the strongest condemnation of the US attack and support for Iran.

“Gen. Soleimani was an intelligent military leader, established a well-deserved authority and significant influence throughout the Middle East,” read a Russian Ministry of Defense statement.

“Under his direct guidance and command, long before the so-called international coalition led by the United States, military resistance to [the] international terrorist groups [the Islamic State (IS)] and al-Qaeda was organized in Syria and Iraq. His personal сontributions to the fight against [IS] in Syria are undoubtable,” the Russian military stressed in the statement.

It added, “Short-sighted steps by the US in the form of the assassination of Qasem Soleimani led to a sharp escalation of the military-political situation in the Middle East and serious negative consequences for the entire system of international security.”

Earlier, commander of the Russian forces in Syria Lt. Gen. Alexander Chayko, appointed to this position in September 2019, led a Russian military delegation to the Iranian Embassy in Damascus to lay wreaths and pay tribute to Soleimani.

Later that day, speaking to Iranian media, Ali Akbar Velayati, a top adviser to Iran's Supreme Leader Ali Khamenei, noted that “Qasem Soleimani was key in [Iran’s] partnership with Russia and that [Soleimani] had great respect for President Putin” — a message widely cited in Russian media.

Since the killing of Soleimani, Moscow has been particularly concerned with how this, among other things, may affect Russia-Iran cooperation in Syria, the domestic situation in Iran and the American presence in the region.

Nadana Fridrikhson, a Russian journalist covering the Middle East, says the US strike sought four goals: first, to behead the Hashid Shaabi (also known as the Popular Mobilization Units, an Iraqi state-sponsored umbrella organization composed of 40 mostly Shiite militias); second, to break the spine of the Iranian “axis of resistance”; third, to impact the situation in Syria; and fourth, to impact the domestic situation in Iran.

“Qasem Soleimani was very much personally involved in saving the Assad regime. When they say Assad owes Iran a lot, we should primarily think of Soleimani. But this was during the war times. In the political process, Soleimani could have become a problem for Assad. The Syrian president would, at best, have to coordinate every step of his own with the Iranian general and in the worst-case scenario be a conductor of Iranian decisions,” Fridrikhson argues.

She added, “The killing of Soleimani potentially opens some space for Americans in Syria. They may come up with some 'interesting proposals' [to Damascus]. Trump will continue to aggressively push out all pro-Iranian militias from the country, including with bombings. Soleimani’s death closed the ranks for [the Islamic Revolutionary Guard Corps], but replacing him on the ground may be challenging.”

Putin’s visit, perhaps, gives Assad necessary reassurances and eyes strengthening Russia’s own positions in Syria in the areas of strategic importance to Moscow.

“In fact, Moscow received the liquidation of Soleimani with satisfaction, envy and awe,” Arkady Dubnov, a Moscow-based political analyst, argues.

“With satisfaction, because the elimination of the No. 2 person in Iranian leadership weakens the regional positions of Tehran and strengthens those of Moscow,” Dubnov explains.

“With envy, because the White House openly showed who the main shaper of the world order today is. This status is still out of reach for the Kremlin, and it has to conduct its own operations clandestinely since it’s not really certain whether it has the 'right of the powerful.' With awe, because the American operation was effective, targeted and swift,” he adds.

‘We prefer to deal with things how they are — weigh in pros and cons for us — not rejoice over our partners’ losses. Soleimani was a man of his word, and we enjoyed working with him on a few occasions over Syria,” a source in the Russian Foreign Ministry who spoke with Al-Monitor not for attribution said.

“In this impudent assassination of the top official, we see huge risks first and foremost; everything else is expert speculation,” he added.

“Even if we assume this development leads to the significant departure of the US from the region, it doesn’t automatically mean Moscow is the ultimate winner here; it’s a bit more nuanced,” the diplomat said.

Putin is set to conclude his January Middle East tour in Israel on Jan. 22-23 to commemorate the freeing of thousands of people from the Auschwitz concentration camp. Things may change in the region by that time, but the issue of Iran will obviously loom large at his meeting. For now, Syria and Libya are the main concerns for the Russian president as he heads to Turkey.