Following a meeting between Syrian President Bashar al-Assad and his Russian counterpart, Vladimir Putin, in Sochi, Putin's comments that "foreign armed forces" will withdraw from Syria have left those involved guessing what it means. 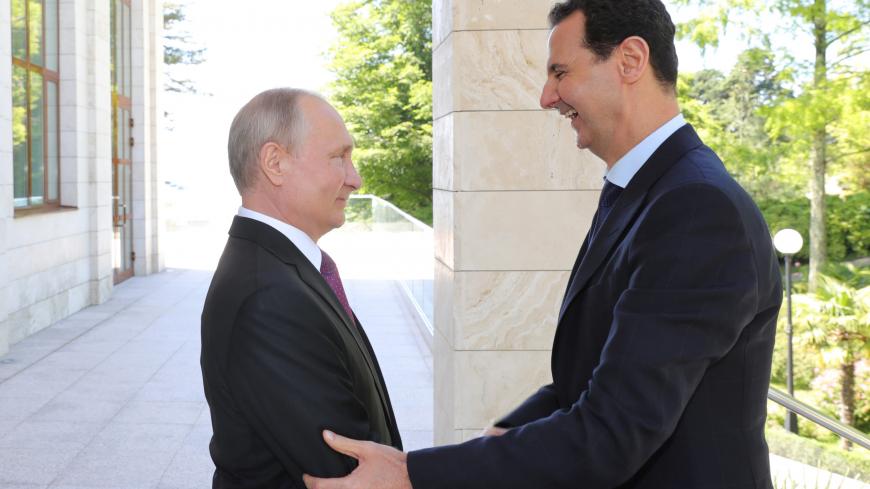 Syrian President Bashar al-Assad met with Russian President Vladimir Putin in Sochi May 17. The brief visit comes amid escalations between Iran and Israel in Syria as well as further gains by the Syrian army in opposition-held areas.

As Al-Monitor reported on May 10, following the May 9 visit of Israeli Prime Minister Benjamin Netanyahu to Moscow, “a high-level visitor or two from Syria or Iran” had been expected in Russia “rather soon.” On May 14, Iranian Foreign Minister Mohammad Javad Zarif visited Moscow for talks with his Russian counterpart, Sergey Lavrov. Three days later, Assad, accompanied by his defense minister, Ali Abdullah Ayyoub, arrived in Sochi. Russian Defense Minister Sergei Shoigu and Lavrov were both present at the meeting with Putin.

Assad and Putin had last met on Dec. 11, 2017, when the Russian leader visited the Khmeimim air base. A few weeks earlier, on Nov. 20, Assad had met with Putin in Sochi, where he was introduced to the senior leadership of the Russian Defense Ministry and chief of staff as well as other key military figures with decisive roles in Russia’s Syria campaign.

The Syrian president's brief visit to Sochi this time was announced by the Kremlin after Assad had already returned to Damascus. Putin congratulated Assad on the start of the holy month of Ramadan and praised the “major success of the Syrian Government Army in the struggle against terrorist units,” describing recent military efforts as “important steps toward the further consolidation of the legitimate government.” Putin called the military gains instrumental in creating “additional conditions … for the resumption of the full political process.” This is what Moscow is now pushing Damascus to focus on, and not without moderate success if the perception manifested at the talks is accurate.

Arguably the most important outcome of the meeting is that Assad has finally embraced the need to form a committee tasked with drafting a Syrian Constitution. Assad had opposed the idea, for fear of eventually losing power or being traded off, ever since its adoption in January at the Syrian National Dialogue Congress in Sochi. Moscow has advocated the idea as the best tool to navigate the conflict into the politico-diplomatic domain (and one that would allow it to maintain influence over the process).

In a statement following yesterday's talks, Assad said, “We assessed developments in the political process in recent months, by which I mean the outcome of the Syrian National Dialogue Congress and the latest rounds of talks in Astana, and we discussed steps that need to be taken to keep achieving progress in this area. … We expect to start the corresponding work with the UN. I have confirmed to President Putin today that Syria will send the list of its delegates to the Constitutional Committee to discuss amendments to the current Constitution. It will be done as soon as possible.”

Other items on Moscow’s to-do list to be implemented in parallel with the political process include enlisting international support for rebuilding Syria’s infrastructure and economy as well as addressing humanitarian issues, which Putin said are “long overdue and complicated.” “We are counting on support from the United Nations and all countries interested in resolving the Syrian crisis,” the Russian president stressed. In turn, Assad praised Russia’s efforts in this area, thanking Putin personally and his government for the “humanitarian aid that Russia has always provided, at every stage of the Syrian crisis.”

The two presidents also discussed further means to encourage Russian companies to invest in the Syrian economy and increase participation in the reconstruction process. Assad noted growth in Russian investments “in various areas of the Syrian economy” in recent months.

The results of the Putin-Assad talks have seemingly left both leaders happy. Dmitry Peskov, the Kremlin's acting spokesman, called the talks “considerable.” He added, "[Putin and Assad] spoke of the need to create additional conditions to resume comprehensive negotiations. They noted successes of the Astana process and Sochi Congress … and discussed next joint steps."

The most intriguing takeaway from the meeting are perhaps Putin’s remarks about the foreign military presence in Syria: “We proceed from the assumption that in view of the significant victories and success achieved by the Syrian army in its fight against terrorism, and the start of a more active phase of the political process, foreign armed forces will be withdrawing from the territory of the Syrian Arab Republic.”

All the interested players in the conflict picked up on the vaguely worded statement to interpret it through the lens of their own expectations and interests. In Russia, while some wondered whether Putin was alluding to yet another “Russian withdrawal,” others perceived it as a message to the United States to cease its “illegal intervention” in Syria. Iran did not issue an immediate response to the statement, but if the message was indeed aimed at Washington, Tehran could not have agreed more. In Israel, many took Putin’s remark to be a signal to the Iranians as part of Moscow's alleged efforts to mediate between Israel and Iran.

A source in the Kremlin contacted by Al-Monitor declined to clarify to what or to whom Putin was referring with the remark about “foreign armed forces.” The source only offered, “It is still a work in progress, diplomatically and on the ground. We are trying to make the situation there [in Syria] a less conflict-rich place for everybody, but it is no easy task.”