Hamas must choose: Egypt or Iran?

Angered that Hamas leader Ismail Haniyeh broke an agreement not to visit Iran, Egypt will make Hamas understand that it must choose sides and break with Iran if the movement hopes to survive. 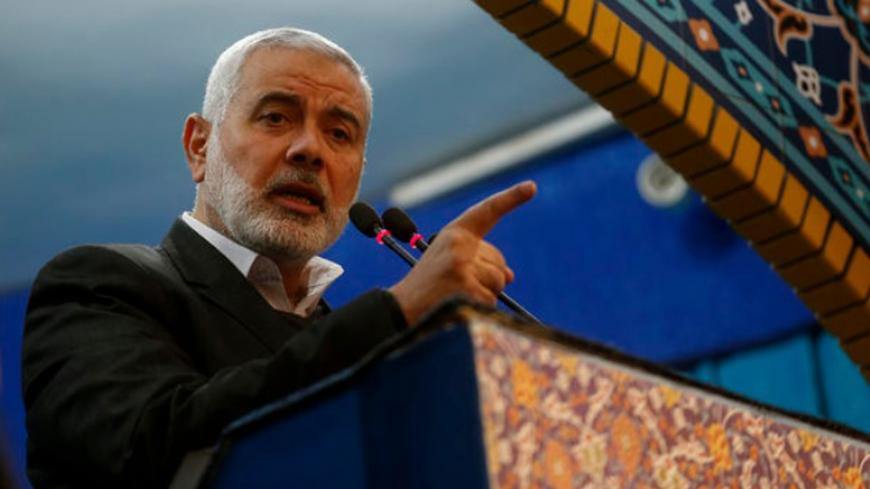 On Dec. 1 Ismail Haniyeh, head of Hamas’ political bureau, left Gaza for a series of meetings in Cairo with Egyptian intelligence regarding his movement's arrangement with Israel. On the same occasion, the Egyptians authorized Haniyeh, at his request, to travel to Muslim countries on the condition that he not visit Iran. Haniyeh agreed to the condition and left Gaza after having been “imprisoned” since his election to his current post in summer 2017, because Egypt had not allowed him transit through the Rafah crossing.

Haniyeh had intended to use his permission to leave Gaza to prove that he can raise funds for Hamas at least as well as Mousa Abu Marzouk, the Hamas senior whiz who is thought to have set a movement record for fundraising from Islamic foundations around the world. Haniyeh even planned to travel as far as Indonesia. Egypt’s goodwill “exit visa” stemmed from the hope of creating a more conducive atmosphere to help advance a long-term arrangement with Israel.

Against this backdrop, Haniyeh traveled to a number of countries, including paying visits to Turkish President Recep Tayyip Erdogan and Qatari Emir Tamim bin Hamed Al Thani, the generous and primary supporter of Gaza. On Jan. 3, toward the end of Haniyeh's journey, the United States assassinated Gen. Qasem Soleimani, leader of Iran's Quds Force, after which Haniyeh decided to take a risk and fly to Tehran to attend the funeral and even deliver a eulogy. The Egyptians, angry of course, quickly responded with sanctioning: the price of cooking gas piped from Egypt into Gaza immediately increased. That appears to have only been the beginning.

A political source in Hamas asserted to Al-Monitor that Haniyeh had had no choice. “At the moment the news was received about the assassination, he [Haniyeh] made the right decision to express sadness and anger at the atrocious American attack,” the source said, speaking on the condition of anonymity. In conversation, the source tried to minimize the depth of the crisis the visit has cause between the Egyptians and Hamas.

An Israeli security source told Al-Monitor that Israel must now, with arrangement talks at their most critical point, ascertain its next steps in light of Haniyeh’s public show of support in Iran. Will Israel retreat from the understandings thus far reached with Hamas? It’s still too early to tell. In one way or another, the diplomatic-security establishment in Israel will face difficulty selling the arrangement outline to the Israeli public after a Hamas leader has traveled to Tehran and delivered a eulogy for its number one terrorist.

Haniyeh has become persona non grata in Egypt's eyes. He violated a commitment he made to them, and as Hamas' senior leader in Gaza, he proved his loyalty to Iran. Thus, it seems that Haniyeh in short order flushed down the drain the many years of work by Hamas to please Egypt and appease President Abdel Fattah al-Sisi.

Haniyeh and others in Hamas had worked hard in recent years to get closer to Egypt. Hamas' leadership even entered into an alliance with Mohammed Dahlan, a friend of the Egyptian president and someone they once considered Satan, and convinced him to help Hamas improve relations with Cairo. In a surprising move at the time, Hamas even announced the severing of ties with its mother movement, the Muslim Brotherhood, a group that Sisi hates.

One should remember that Hamas founder Sheikh Ahmad Yassin established al-Mujm’a al-Islami (from which Hamas arose) as the Palestinian branch of the Brotherhood. Yet, Yassin always understood Egypt’s important role in the region and steered clear of direct support for Iran, despite his admiration and enthusiasm for the Islamic Revolution.

The Egyptians' response to Haniyeh's Iranian sojourn is especially interesting. In the long tem, the Egyptians intend to influence the year-long process starting this year to select representatives to Hamas' Shura Council and political bureau. The elections are blind; even the identities of eligible voters remain confidential, a vestige of an underground organization that feared assassinations by Israel.

In a related matter, according to a Dec. 26 report by Gal Berger, former Hamas political bureau chief Khaled Meshaal is currently interested in running for his old job. To the Egyptians, Meshaal represents a thorn in their side, a puppet operated by its enemies Qatar and Turkey. Now Haniyeh has joined them on Cairo's “enemies list.”

Yahya Sinwar, head of Hamas in Gaza, is the only leader who understands the movement's situation — caught between a rock and a hard place, i.e., Iran and Egypt. As an acolyte of Yassin and a co-founder of Hamas' military wing, Sinwar knows that they shouldn’t put all their eggs in one basket. Iran is a friend, but a distant one, while Egypt is close. Sanctions by Cairo against Gaza could choke it. He knows well that Sisi must not be angered, especially after the huge investment made in appeasing him and having Egypt serve as moderator with Israel to guarantee the movement's survival.

Egypt, said the Israeli security source, has a way to politically damage Haniyeh: Not only will they make it difficult for him to leave Gaza, the Rafah crossing will no longer be wide open to Palestinian movement. They will also hint that Haniyeh and his associates in the pro-Iranian and Turkish camp are to blame for the situation, because they lack good diplomatic judgment and fail to understand what it takes to manage Gaza responsibly. The Egyptians will make Hamas grasp that if the movement remains interested in surviving, its future leadership must choose the right side — that is, Egypt, with disengagement from the enemy, Iran.

Will it work? Hamas since its founding has proven that it is a movement that wants to succeed and survive. It shifts its horizons and even softens its hardline ideology according to circumstances and needs. Thus, going forward, every candidate for the Shura Council will know that Egypt controls Gaza’s oxygen supply. It’s not worth going against it.