Hamas is seeking to expand its regional relations, namely with Egypt, which is seemingly trying to ease tensions with the movement. 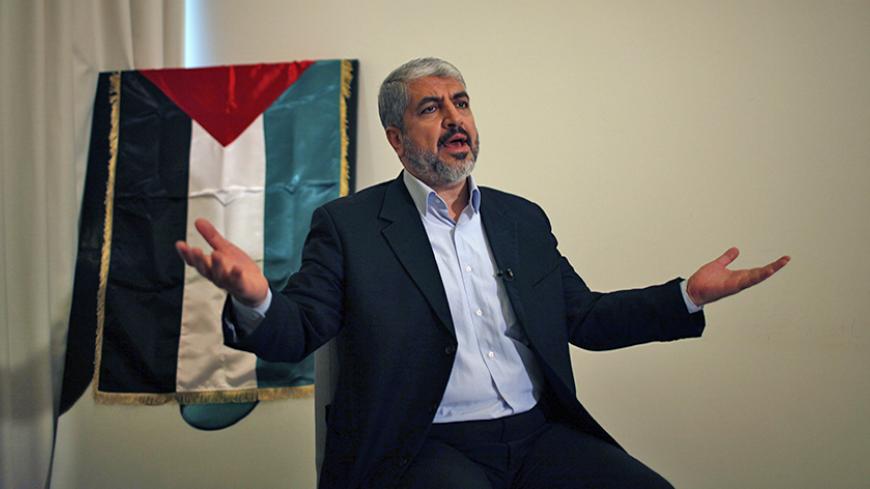 Since March 2014, Hamas has made a series of successive political contacts in a variety of directions. Khaled Meshaal, the head of Hamas’ political bureau, met on March 11 in Qatar with Iranian parliament speaker Ali Larijani, exchanging views on the Palestinian issue and the siege on Gaza.

Bassem Naim, the deputy head of Hamas’ political bureau, told Al-Monitor, “Iran reconfirmed its support for the resistance during the meeting, thus restoring warmth to the relationship between Hamas and Iran, which had cooled due to regional events.”

Yet a prominent journalist who is close to decision-making sources in Doha, who spoke on condition of anonymity, told Al-Monitor, “The meeting between Meshaal and Larijani was nothing more than a formality, and will produce no results in terms of the relationship between the two. This is because Iran has not changed its conditions for renewing the relationship, including the request that Hamas change its position on the Syrian crisis.”

The collaboration taking place between Hamas and Iran has yet to lead to a full normalization of relations between the two countries, which would ensure the return of real financial and military support to Hamas. This is because Iran is still placing strict conditions on Hamas for the provision of such support.

Although Hamas has provided many positive signs to Iran in recent months — including directing messages of thanks at Tehran several times in public celebrations on Dec. 14, 2014, and sending condolence letters regarding the assassination of Iranian military leaders in Syria on Jan. 28, 2014 — these courteous messages did not succeed in Hamas securing the financial and armament aid it wants from Iran.

While Hamas’ relationship with Egypt is not optimal, on March 11, 2014, the Egyptian government challenged a Feb. 28 ruling by the Court of Urgent Affairs in Cairo to consider Hamas a “terrorist group.”

Izzat al-Rishq, a senior Hamas official who lives in Qatar, told Al-Monitor, “The Egyptian [government’s] appeal of the judicial ruling against Hamas confirms that the court’s ruling is bad for Egypt and its regional role. This step was necessary to redress the historical mistake of accusing the Palestinian resistance of terrorism.”

It seems that Egypt’s backing down from considering Hamas a terrorist group is a political decision par excellence, revealing Cairo’s desire to keep the Palestinian card in its hand, as this gives it a strategic role. Perhaps Egypt believes that it is not in its interest to antagonize Hamas, out of fear of losing a valuable card that grants it great importance in the conflict of regional balances.

Hamas spokesman Sami Abu Zuhri told Al-Monitor that the Egyptian government’s challenge of the judicial ruling was “a political recognition that a big mistake had been made and should be corrected, in order to rectify the bilateral relationship. Hamas has confirmed that it will not interfere in any internal Arab affair, particularly concerning Egypt, and looks forward to establish a stable relationship with Cairo.”

Al-Monitor learned from influential Hamas sources that the remarks made by the movement’s leader Ismail Haniyeh on Feb. 24, 2014, in which he stressed Hamas’ keenness on the security and stability of Egypt, were made at Cairo’s request to ease the tension.

Hamas has condemned the violence in Egypt via statements made by political bureau member Moussa Abu Marzouk on March 11 describing the bombings in the Sinai Peninsula on March 9 as “terrorist attacks.”

The paradigm shift in Hamas’ position toward Egypt was represented by the statements on March 15 of Mahmoud al-Zahar, a member of the movement’s political bureau. He said that Hamas seeks to build good and stable relations with the Egyptian regime, regardless of its approaches.

These changes in Hamas’ positions toward Egypt imply that the movement has turned a page on seeking the return of the Muslim Brotherhood to rule, without declaring it in practice. This is because the Egyptian regime extending its control throughout the country — despite the security tensions — requires from Hamas a rational and political position more than an emotional and ideological one, represented by a desire to cooperate with President Abdel Fattah al-Sisi.

The new development with regards to easing the tension between Hamas and Egypt relates to what has been said about Saudi pressure on Cairo to change its view of Hamas, following Sisi’s visit to Riyadh on March 1.

A former member of the Saudi Shura Council, who spoke to Al-Monitor on condition of anonymity, said, “President Sisi listened to Saudi calls to ease the Egyptian [pressure] on Hamas, because the new Saudi [leadership] does not view the movement as a terrorist group, rather it considers it a Palestinian resistance movement.”

This is what prompted Atif Adwan, a member of the Legislative Council for Hamas, to tell Al-Monitor, “There are encouraging signs that the Saudi view of Hamas is changing.”

Speaking to Al-Monitor, the same Saudi official would neither confirm nor deny previous reports regarding coordination between Hamas and Riyadh, since Saudi Arabia likes to conduct politics away from the media. Yet Hamas is becoming closer to Riyadh in a way that pleases the two, and they don’t want to rush to issue press reports that could place arrangements to improve relations on the back burner, according to the source.

Saudi Arabia feels the dangers of Iran approaching its border after Houthis tightened the noose on Yemeni cities on Jan. 25. It might even form a Sunni axis to face the Shiite expansion, which would mean reshaping the Middle East to confront Iran.

Hamas is a cornerstone in this axis, as it is highly regarded by the Arab public opinion. If Saudi Arabia succeeds in bringing Hamas to this axis, it would be taking a winning card away from Iran; although, according to Zahar, the movement is under no one’s control and does not establish relations with one party at the expense of another.

This pushed Haniyeh to announce on March 22 that Hamas endeavors to open up to balanced relations with all countries.

Finally, the obstacle that might impede relations between Hamas and Iran from going back to normal is the regional expansion of Iran and its clashes with several countries in the region in Syria, Iraq and recently Yemen. On the morning of March 26, Saudi, Gulf and Arab forces, launched an air campaign against the Houthi positions, with international support.

Therefore, the regional polarization has left Hamas perplexed. Should it resort to Iran, while siding with Turkey and Qatar and drawing closer to Saudi Arabia, although this is an unacceptable formula of coalitions? Hamas should be well aware that its shift to another camp will automatically make it lose the support of its initial camp.