Recent US attacks on positions along the Syrian border held by Iran-linked armed groups — some of whom are on the Iraqi government payroll — have led to insecurity among local residents, who had been seeing improvements in their lives. 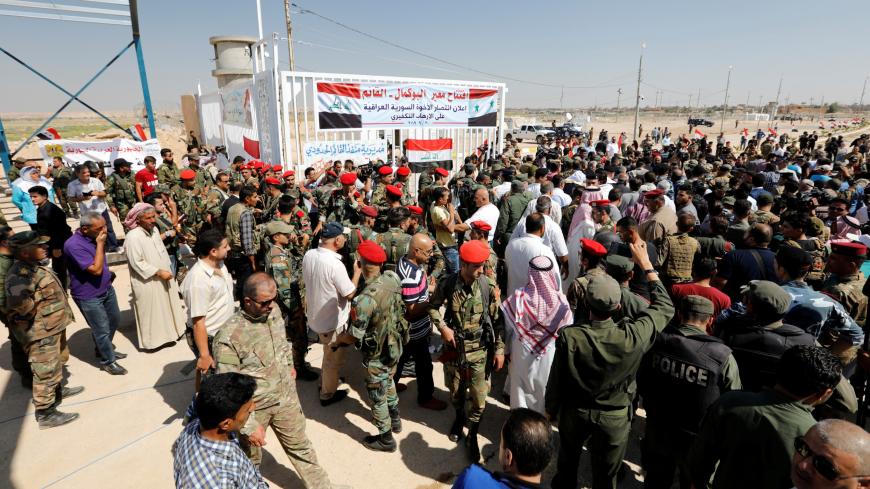 Security forces are seen at the Iraqi-Syrian border crossing after it was reopened for trade and travel, in Qaim, Iraq, Sept. 30, 2019. The Dec. 29 US strikes against Kataib Hezbollah and subsequent developments have given residents pause. - REUTERS/Thaier Al-Sudani

QAIM, Iraq — A white surveillance balloon floats overhead along the border between western Iraq and Syria, but the armed drones are not always so obvious.

While reported attacks in the area are often difficult to verify as media access to the area is restricted, there were reports Jan. 24 — quickly denied by Kataib Hezbollah — that a Kataib Hezbollah leader and other fighters had been killed in Qaim by a drone.

Rockets, meanwhile, that hit Baghdad’s Green Zone — including on Jan. 26, when the US Embassy cafeteria was struck during meal time and three rockets reportedly directly hit the diplomatic facilities — are often unclaimed but presumably launched by Iran-linked armed groups also operating near the border area.

On Jan. 23 — less than a month after the US attack on Iran-linked, Shiite-led Kataib Hezbollah positions near the Iraqi-Syrian border that sparked major tensions between the United States and Iran — Brigade 45 claimed its air defenses had prevented a US drone from flying over its base in the area. The brigade is one of the Shiite-led Popular Mobilization Units (PMU) that the United States hit Dec. 29, killing 27 and injuring 51.

​Some suggested the claim about repelling the drone was likely fabricated, an attempt to shore up morale after a US drone killed Kataib Hezbollah commander Abu Mahdi al-Muhandis and Iranian Maj. Gen. Qasem Soleimani on Jan. 3 at the Baghdad airport.

All the Iraqi forces operating in Qaim say, officially, that they collaborate with one another. However, individuals within the forces told Al-Monitor that there are unresolved issues between local and non-local forces and that groups crossing the nearby border do not answer to the central government.

It has long been difficult for journalists to gain independent access to Qaim. This reporter was the only Western journalist on the operations to liberate Qaim and Rawa with the Iraqi forces in late 2017 and has for years been in contact with a wide variety of locals and tribal leaders but still encounters major difficulties accessing the area and staying any length of time. It did, however, manage a two-day trip to the city earlier this month.

The Sunni city’s residents have largely become accustomed to the non-local Shiite-led PMUs, now based outside of the city and mostly along the border, across which Shiite armed groups have for years been crossing into Syria to fight alongside the Iran-linked “muqawama” (“resistance”). Many locals would still like to see the Shiite PMUs leave but acknowledge that the Iraqi army alone may not be able to maintain security.

One member of a local PMU in Qaim, speaking on condition of anonymity due to security concerns told Al-Monitor, “The Sunni are afraid of the Islamic State [IS] if the US leaves, and of the Shiite” forces here now, but “there is no strategy.”

Few IS attacks have been reported in recent months. However, Abu Aya, a former local SWAT commander and now the leader of the local PMU Kataeb al-Hamza, told Al-Monitor on Jan. 14 that IS had attacked a commando unit stationed between Akashat and the Walid border crossing with Jordan, just across the border from Tanf, where a small contingent of US forces and Syrian opposition fighters trained by them are stationed.

The member of the local PMU who spoke on condition of anonymity said, “Everyone I know trying to rebuild their homes stopped as soon as the [Dec. 29] attack happened. They are worried that their money will be wasted. Everyone is just waiting now to see what will happen.”

The border with Syria opened in late September, and Al-Monitor observed this month that major road work has advanced, bridges are being fixed and a general sense of greater security seems to have settled into the city.

But uppermost in residents' minds is concern that this precarious, hard-won stability will be lost.

Iran and the United States “are just hitting military targets, for now — Kataiib Hezbollah bases, Ain al-Assad [where US troops are stationed]. So far they are not targeting civilians and I don’t think they will,” a shopkeeper in the main market who did not want his name to be used told Al-Monitor.

The local PMU member said, “The Americans are still here, but we don’t see them anymore. They are about a kilometer and a half [a mile] to the east of the Shaheed Haidar checkpoint,” manned by the PMU at the entrance to the city. The checkpoint is named after "Martyr Haidar," a Shiite fighter who died in battle.

”We see their vehicles when we pass them on the road, but that’s all,” the PMU member added. “According to the information we have, there are Americans and Norwegians. But most are Americans. But no one knows. We don’t go to Baghdad anymore,” he said, unlike during the liberation operations in 2017 and the immediate period following it, when there was greater collaboration.

Qassim Musleh, head of the Shiite-led PMU for western Anbar and thus for the Kataib Hezbollah brigades attacked in Qaim, refers to the United States as “the enemy.”

In an interview with Al-Monitor in Karbala in central Iraq in November, he said that “the United States' entrance into eastern Syria is the reason for instability in Iraq” and that “we cooperate with the Syrian regime but where the [US-backed] Syrian Democratic Forces are, the situation is not under control.”

An IS resurgence would occur if his fighters were not there, Musleh said.

“We are working across all of Anbar,” he said. “There are connections now between the PMU and the tribes and the local tribal PMU. Anbar has very long borders with neighboring countries — Syria, Jordan and Saudi Arabia. Despite this, you can see that it is one of the best provinces in terms of security. And this is because of this cooperation between the tribes and the security forces.”

However, Musleh had in a previous interview claimed that the Iraqi army’s 7th Division, which operates in western Anbar along with the 8th Division, had been “spying” on his forces for the United States.

Locals say the Iraqi army’s 8th Division, stationed in Qaim, is “afraid” of the Iran-linked PMU. However, Musleh claimed during the interview conducted at the Karbala shrines complex, where he also holds the position of deputy security chief, that the major problem was that the Iraqi army is “entirely under US control” and that “the Defense Ministry cannot make any decisions without US approval.”

After Soleimani and Muhandis were killed, Iran reacted with a barrage of missiles at Iraqi bases where US troops were stationed. While no US troops were killed, 34 suffered traumatic brain injuries. All this shows that for Iraq, a clear chain of command seems more essential than ever.

Given continued attacks on the Green Zone, a volatile political situation and ongoing protests, a lack of clarity on who is controlling which armed forces across the country could endanger hard-won but precarious stability. 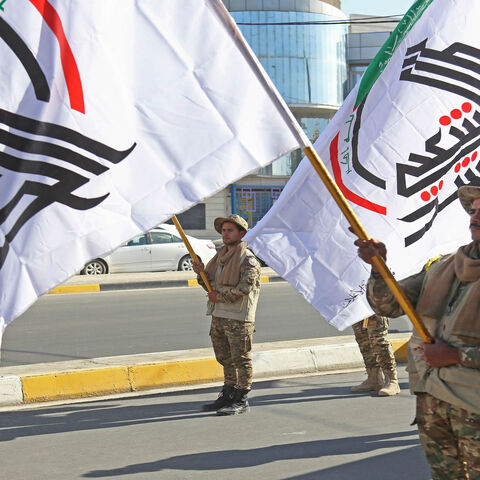