Following the assassination of Qasem Soleimani in Baghdad, Iraq’s parliament voted for a resolution demanding the prime minister expel all foreign troops from the country. 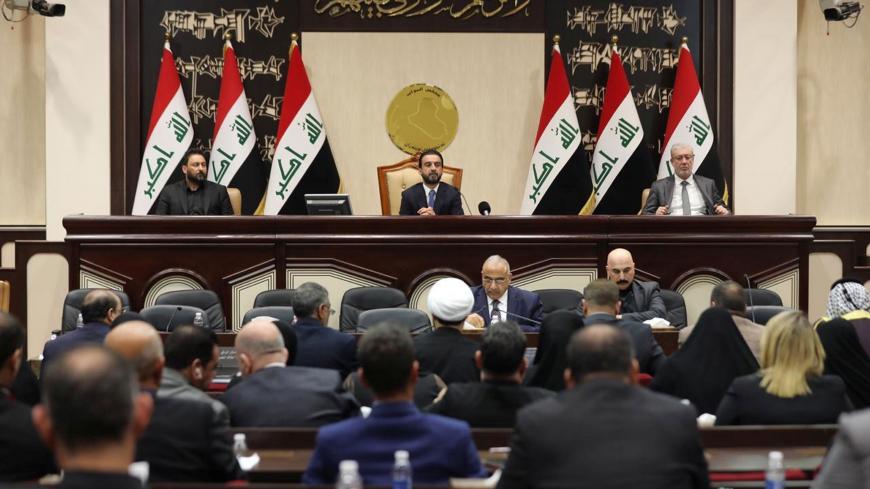 Members of the Iraqi parliament are see during a session to discuss the presence of US forces in the country, Baghdad, Iraq, Jan. 5, 2020. - Iraqi parliament media office/Handout via REUTERS

BAGHDAD — At an extraordinary session in the absence of all Kurdish and most Sunni parliament members, the Iraqi parliament passed Jan. 5 a decision urging the government to cancel the request for assistance submitted by it to the international coalition to fight the Islamic State (IS). Parliament called to end the presence of any foreign forces on Iraqi territory and prevent them from using Iraqi land, water and air for any reason whatsoever.

The decision came in the aftermath of the killing of Qasem Soleimani, chief commander of the Islamic Revolutionary Guard Corps' (IRGC) Quds Force, and Abu Mahdi al-Muhandis, the deputy head of Iraq's Popular Mobilization Units, by US forces Jan. 3.

The Iraqi parliament called on the government to urgently submit to the United Nations and the Security Council a complaint against the United States for its “serious violations and breach of Iraqi sovereignty and security.” It further pressed, the Iraqi government must conduct investigations at the highest levels into the circumstances of the US bombing and report back to parliament within seven days.

The fresh decision, however, failed to meet the calls by the political parties loyal to Iran and the armed Shiite factions to terminate the security agreement signed between Baghdad and Washington in 2008, shut down the US Embassy in Baghdad and sever diplomatic ties between the two countries.

Many reasons could be behind this, most notably because the agreement binds the Iraqi government to submit a termination request to the United States through the Iraqi Foreign Ministry. Under the agreement, this request would be executed one year from the date of its submission.

Meanwhile, the current Iraqi government is a caretaker government, as Prime Minister Adel Abdul Mahdi resigned Nov. 29. Under the Iraq Constitution, his government cannot conclude or cancel international agreements and treaties or propose laws. Furthermore, the Iraqi forces need US support, especially in terms of airspace reconnaissance activities and training of local forces. Kurdish and Sunni parties had invoked this reason for justifying their refusal to terminate the agreement with the United States.

The Iraqi prime minister, who recommended parliament expel US troops from Iraq during his speech at the extraordinary session, also hinted at the existence of significant consequences for this decision. He said, “If this (expelling US forces) turns into a confrontation and some see it as a hostile act rather than a corrective and reform measure … there may be political, economic, monetary and security costs at the level of international relations not only with the United States but with many of the countries of the international coalition.”

Therefore, parliament’s decision was limited to pushing the government to seek an end to foreign presence without addressing the security agreement with Washington. However, the caretaker government has the right to negotiate with external parties, and the legislative authority does not obligate the executive authority to take any decision. Its work, under the constitution, is limited to monitoring and legislating, and accordingly, one may say the recent parliament decision is a mere recommendation or an expression of a position.

Meanwhile, Article 61 of the Iraq Constitution reads as follows: “Regulating the ratification process of international treaties and agreements shall be by virtue of a law, to be enacted by a two-thirds majority of the members of parliament.”

The constitution did not tackle parliament or the government’s powers to cancel treaties or agreements. The only solution, in this case, would be to refer to the terms of the agreement, which only specified a cancellation and withdrawal mechanism that may only be implemented “on year after either of the parties submits a written termination request.”

Regarding the US response to the Iraqi parliament decision, US Secretary of State Mike Pompeo said in an interview with Fox News Jan. 5 that Abdul Mahdi, who asked parliament to set a timetable for the ouster of all foreign forces from the country, “is just the prime minister, the resigned prime minister; he is the acting prime minister [and] is under enormous threats from the very Iranian leadership that we are pushing back against.”

He added, “We are confident that the Iraqi people want the United States to continue to be there to fight the counterterror campaign. We will continue to do all the things we need to do to keep America safe.”

Each of the parties to the crisis is trying to interpret the Iraqi parliament’s decision to expel foreign forces in its own way.

Iranian President Hassan Rouhani described it in a telephone conversation with Iraqi President Barham Salih as “an important step that will contribute to strengthening security and stability in the region.”

Some Iraqi factions saw it as “a clear breakthrough,” with the exception of the leader of the Sadrist movement, Muqtada al-Sadr, who expressed his dissatisfaction with the parliament’s vote on the US presence in the country.

Sadr asked parliament in a tweet Jan. 5 to shut down the US Embassy in Iraq and criminalize dealing with Washington. He labeled parliament’s position as “meager and unfulfilling in the face of the US violation of Iraqi sovereignty,” He also warned of taking “further actions” if his demands are not met.

For its part, Washington is well aware that ending the military presence of its forces in Iraq needs a political majority that is not currently available in Iraq and legislation that the resigned government in Baghdad will not be able to pass in light of the prevailing circumstances. The United States knows that what is happening is an attempt by the Iraqi parties opposing the US presence to relieve themselves of their obligation ensuing from the assassination of Soleimani and Muhandis.

This complicated scene suggests the continuation of the security escalation on the ground and rising tensions between the Iraqi government and the US administration.

The targeting of the US Embassy in Iraq with missiles and mortar shells is likely to continue if Baghdad's government fails to put an end to the security spill and political parties fail to fill the constitutional void and nominate a new prime minister that meets the demands of the protesters in the streets.

Iraqis have been calling for early legislative elections that would produce a parliament capable of taking difficult and firm decisions regarding relations with Washington and Tehran and the policy of disassociation of Iraq.