Iraqi protests got caught in an Iranian-American war

The escalation between US and Iran left Iraqis trapped with many nightmares threatening their protests, economy and country’s unity. 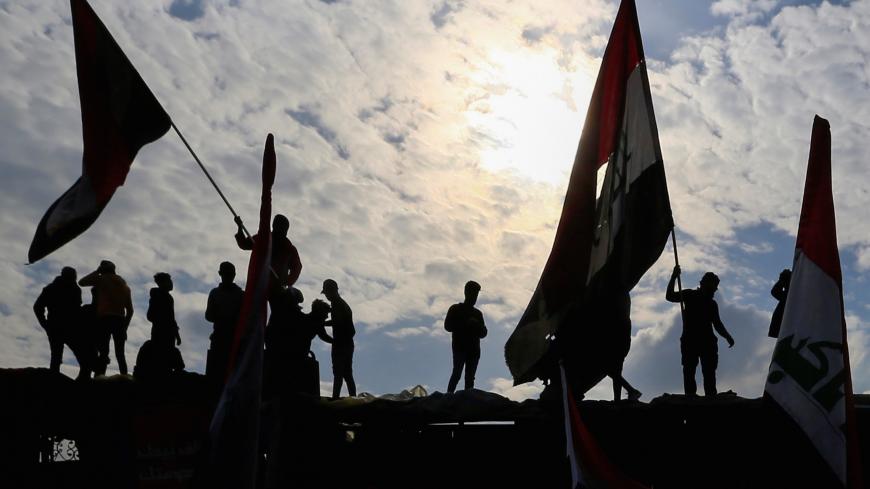 The first nights of 2020 were harsh for Iraqis who stayed up late following the accelerating developments and resulting feelings about a possible Iranian-American war on the country territory after a US drone killed Iranian Maj. Gen. Qasem Soleimani, along with several others, near the Baghdad airport Jan. 3.

The assassination left Iraqis divided and led many American oil workers to flee Iraq the same day amid fears of an expected Iranian retaliation. It also cast a dark shadow over the country’s widespread civil protests that erupted in Baghdad and major southern cities Oct. 1.

\“[US President Donald] Trump committed a catastrophic mistake by killing Soleimani and Abu Mahdi al-Muhandis as he handed over a large part of Iraqi Shiites to Iran again after a large section of them turned against Iran's interventions in Iraq since October’s demonstrations,” Ali Bashar, a political scientist at Bayan University in Erbil, told Al-Monitor. “This action has also increased the hostility of the USA’s enemies in Iraq, namely the Binaa Alliance,” he added.

Soleimani, who was the commander of the Islamic Revolutionary Guard Corps’ Quds Force, was a major player in Iran’s dominating influence over Iraq,

Caretaker Prime Minister Adel Abdul Mahdi condemned the attack, calling it an “outrageous breach of Iraqi sovereignty and the terms of the American forces’ presence.”

In an emergency session Jan. 5, the Iraqi parliament approved a draft bill requiring the government to ask Washington to withdraw American troops from the country, rescinding an Iraqi invitation to US forces made when the Islamic State (IS) overran large swaths of Iraq’s northwest in 2014. However, the move is largely symbolic, as it sets no timetable for withdrawal and is subject to Abdul Mahdi’s approval.

Secretary of State Mike Pompeo shrugged off the vote urged by an outgoing prime minister “under enormous Iranian threats." Pompeo told Fox News Sunday, “We are confident that the Iraqi people want the United States to continue to be there to fight the counterterror campaign.”.

Expressing their fears of a proxy war, anti-government protesters in Tahrir Square in central Baghdad took to the street with a banner addressing both Iran and the United States that said “Keep your conflicts away from Iraq” and also launched a hashtag #IraqIsNotWarGround.

“All protesters throughout Iraq reject any interference in the country's internal affairs, whether it was American or Iranian,” said Montadhar al-Nazzal, a journalist and activist from Basra. “The recent attack is a breach of national sovereignty. The demonstrators want the complete removal of all foreign forces. However, we are afraid of a possible backlash because Iraq does not have enough resources to survive possible sanctions.”

The United States still has nearly 5,000 troops in Iraq on a handful of bases. Despite the Iraqi parliament's Jan. 5 vote, few expect the government to actually expel the Americans. For many Iraqis, the US presence seems vital to the country’s security and a counterweight to Iranian influence.

After what US officials termed a “poorly worded" draft letter talking about US military repositioning in Iraq leaked online, US Defense Secretary Mark Esper said the letter had no value. “There’s been no decision whatsoever to leave Iraq,” he said, confirming the US commitment to the fight against IS, in Iraq and elsewhere.

Ameer Raad, a mechanical engineer from Babylon, said, “We have no real statesmen to look after our interests. The decisions are emotional ones, based on reactions.” He added, “The USA will never abandon Iraq so easily as a result of a request from an illegitimate parliament’s session.”

In response to the parliament’s call, Trump threatened severe sanctions against Iraq, leaving many people concerned of the consequences.

"We have a very extraordinarily expensive air base that's there,” Trump said, “It cost billions of dollars to build. We're not leaving unless they pay us back for it.”

Many Kurdish and Sunni legislators largely boycotted the vote and it is still questionable whether the quorum of 165 was reached.

Iraqi parliament Speaker Mohammed al-Halbusi, a Sunni, refused to head the parliament session and pleaded with Shiite legislators to reconsider their decision, warning of possible severe economic consequences for the country.

“The parliament’s decision does not represent us,” Karrar Ahmed, a 25-year-old protester from Najaf told Al-Monitor, “We are not represented by the decisions taken by Iran nor by those who mourn Soleimani, who had been killing us for three months.”

Nazzal also questioned the session’s legitimacy. “It was not attended by all Iraqis’ representatives,” he said, “However, the voting was emotional rather than a strategically planned one as Iraqi politicians have not presented the alternatives or studied the expected consequences of such a withdrawal.”

Nightmares of IS atrocities still haunt many Iraqis. Many experts express fear that a US departure could produce a resurgence of IS, as thousands of the terrorist group's’ fighters continue to launch attacks in Iraq and Syria despite its defeat in Iraq in 2017 and in Syria in 2019.

“Freezing the international coalition's cooperation with Iraq might be a golden opportunity for IS to resume its attacks in parts of Kirkuk, Mosul, Anbar and Tikrit,” said Bashar. “IS' reemergence will strongly empower the Iranian-backed militias under the pretext of fighting terrorism,” he added.

Bashar also fears a much worse consequence of a US withdrawal: a split of Iraq into three.

“Insisting on the withdrawal might lead the USA to go to Kurdistan and impose waves of economic and political sanctions on Iraq regarding oil exports, financial assets and terrorism funding. An embargo imposed by the international community is expected, too,” said Bashar, “Iraq might enter into a dire financial crisis, increasing the differences between the Kurds and Baghdad, forcing them to leave the boat and eventually splitting the entire country.”

Fears of escalations between Iran and the United were intensifying when Iran launched more than a dozen missiles at Iraqi bases hosting US and coalition troops Jan. 8, declaring the strikes to be retaliation for the killing of Soleimani.

In an attempt to lessen the diplomatic fallout of this attack, Iran notified Iraq shortly after midnight that the attack had begun and clarified that any strikes would be limited to locations where the US military was present, the Iraqi prime minister’s office said.

No Iraqi or coalition forces' personnel were killed or injured and all parties appeared to signal they did not wish the situation to escalate further.

Bashar and others fear that the demonstrations will be the conflict's scapegoat.

“It was a very big hit to the protests and with such bad timing,” she added, “I feel it has revived the sectarian spirit we were about to get rid of. We welcome the USA as an ally with whom we share benefits, not an enemy that kills us. We are not agents of any other country. We are Iraqis looking for Iraq’s interest. I think we should win the USA as an ally, for it takes and gives in return. Iran just sucked our blood.”

Other’s only option is to keep protesting and demanding people’s legitimate rights.

“Ending this revolution means the end of Iraq and our own lives as we will end up wanted by the militias,” added Ahmed.

“We must increase the protests' momentum until the patriotic spirit spreads again,” said Raad, expecting a new wave of protests Jan. 10, “This is Iraq’s only real chance.”