US Embassy attack backfires on Iran-backed militias in Iraq

The attack against the US Embassy in Baghdad by Iranian militias inside Iraq received no support from the Iraqi public and sparked much criticism against Iran, which led the militias to end the attack before achieving any of their goals. 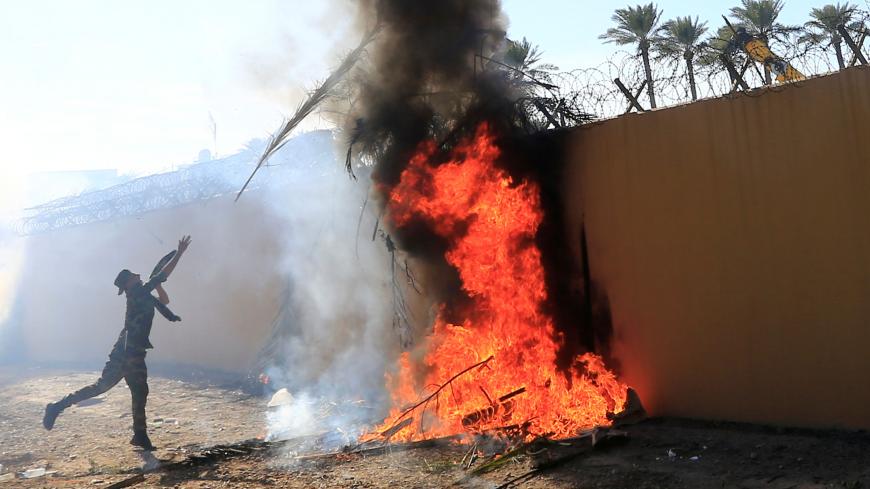 PMU factions set fire to a wall at the US Embassy as they protest airstrikes on their bases, Baghdad, Iraq, Dec. 31, 2019. - REUTERS/Thaier al-Sudani

The attack on the US Embassy in Baghdad Dec. 31 was a public disgrace for Iranian militias in Iraq, as they failed to attract public support, forcing them to end the attack before they planned to without succeeding in their goals.

Despite the mass mobilization, only a few hundred people attended the protests against the US Embassy, stating publicly they would stay there until the embassy closed and US troops left Iraq. They set up tents and cooking facilities in preparation for an extended stay.

They organized groups at the Green Zone gates to help facilitate entrance for volunteers interested in joining the protests. Al-Monitor was able to see several invitations in WhatsApp groups and other communication platforms and on social media beseeching people to join them from all parts of Iraq.

However, not only did the number of protesters at the US Embassy not increase, but it decreased significantly. They organized another attack on the second day, Jan. 1, and comparisons between the two attacks showed clearly the number had reduced.

Many of the Popular Mobilization Units (PMU) factions were silent about the attack, and none of their members participated. Only members of Kataib Hezbollah, Kataib Sayyed al-Shohada, Badr Organization, Saraya al-Khorasani and Asaib Ahl al-Haq participated in the attack, as their respective flags were seen at the protests.

It is clear that public opinion has turned against Iran-backed militias in Iraq — especially since the beginning of anti-government protests Oct. 1 in which militias close to Iran are accused of being involved in the death of protesters and the abduction of a large number of them.

Their conduct during the violent anti-US protests only served to raise more criticism against them, as they raised their militia flags and put Iran’s Supreme Leader Ayatollah Ali Khamenei photos on their chests. One could barely see Iraq flags. Their slogans were also mostly about Iran, like “Qasem Soleimani is our leader” and “US out out, Iran remain free.”

The last slogan was very controversial in comparison with the slogans during anti-government protests, one of which was “Iran out out, Iraq remains free." This has presented them as loyal militias to Iran with no sympathy for Iraq or Iraqis.

Many also criticized government behavior in dealing with the anti-government protests in comparison with the militia protests against the United States.

“More than 500 kids … were killed in cold blood during the anti-government protests trying to pass Al-Jumhuriya Bridge to reach the area that leads to the Green Zone. And the protesters failed to pass through despite the fact 500 of them were killed. But the militias were able to enter the Green Zone in one hour without any problem or difficulties,” a group of protesters in Tahrir Square told Al-Monitor.

In their raid against the US Embassy, the militias appeared as rioters, chaotic forces, disloyal and unpatriotic.

The protesters in Baghdad’s Tahrir Square — in addition to the other cities’ protesters — issued statements denouncing the Green Zone protests, saying, “We are not a part of this protest, and we will continue protesting against the government until they fulfill our demands.”

Iraqi officials also were quick to condemn the attack on the US Embassy. Iraqi President Barham Salih said, “This [attack on US Embassy] is targeting Iraq, its sovereignty and its state before it is targeting any other party.” Caretaker Prime Minister Adel Abdul Mahdi also warned those who were responsible for the embassy attack would face severe punishment.

Sunni forces, Kurdistan Region authorities, Ayad Allawi’s National Coalition (Watania), many Shiite parties like Ammar al-Hakim’s Wisdom Movement and even the Sadrist Movement all condemned the attack on the US Embassy in separate statements.

“Oh Americans, you have committed crimes and you have killed in Afghanistan and Iraq. The people in Syria, Iraq and Afghanistan are upset with the Americans, and this resentment will manifest itself somewhere and it is a natural consequence of American political and security measures in the region,” Khamenei tweeted.

The United States' strong reaction to the attack on its embassy alongside the Iraqi people's disappointment in Iran and its proxy roles in Iraq was a big shock for the militias and have left them in a difficult situation.

US President Donald Trump warned Iran, tweeting Iran "will be held fully responsible for lives lost or damage incurred at any of our facilities. They will pay a very BIG PRICE! This is not a Warning, it is a Threat.”

US Ambassador to Iraq Matthew Tueller returned to the embassy from his New Year vacation on the night of the first day of the protests. Marines were deployed to the embassy during the protests, and US Apache helicopters began flying over the protesters and other parts of the Green Zone to reinforce the already well-fortified embassy.

The helicopters have expanded their area of coverage since Jan. 2, as witnessed by Al-Monitor with many more flying over areas outside of the Green Zone. A large number of Iraqi security forces were also deployed and positioned in the front of the US embassy to prevent any future attack on Jan 2.

Although the attack on the embassy was a dangerous move, it has provided great support to anti-Iranian forces and anti-government protests in Iraq. The protesters — in addition to anti-Iran political forces — have accused Iran for a long time of creating and supporting militias out of Iraqi government control. Iran always denied this, and the militias have claimed they are part of government forces under control of the prime minister. But the move against the US Embassy showed clearly they are indeed out of government control, loyal to Iran and against the Iraqi people.

Iranian militias have clearly been exposed as distinguished from Iraqi national forces, providing an opportunity for the Iraqi government and the international community to isolate them even further and put more pressure on them, which will empower the Iraqi state against the outlaws.