As Khamenei boasts of 'slap' at US, Zarif says revenge 'concluded' 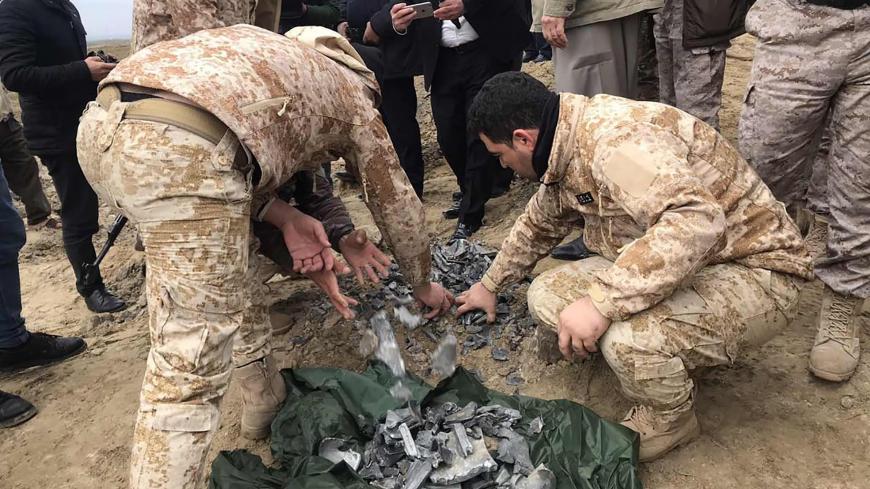 Iraqi security forces find and collect the pieces of missiles as they gather to inspect the site after Iran's Islamic Revolutionary Guard Corps targeted Ain al-Asad air base in Iraq, a facility jointly operated by US and Iraqi forces, at Bardarash district of Erbil, Iraq, Jan. 8, 2020. - Azad Muhammed/Anadolu Agency via Getty Images

Iran's Islamic Revolutionary Guard Corps (IRGC) claimed that its barrage of surface-to-surface missiles against two US bases in neighboring Iraq early Jan. 8 killed over 80 US military personnel, leaving some 200 others injured. IRGC commanders announced that "tens of missiles" were launched, all precisely hitting the targets, with none being intercepted.

Yet hours later, in a televised address from the White House, US President Donald Trump denied any casualties, saying the bases had only been slightly damaged. According to Iraqi sources, 22 missiles came from Iran, striking the Ain al-Asad base in Anbar province as well as an air base in the Kurdish city of Erbil.

In the immediate aftermath of the attack, the Iranian leadership prided itself in fulfilling a promised "harsh revenge" for the death of its most powerful commander, Gen. Qasem Soleimani, assassinated in a US drone attack outside Baghdad International Airport last Friday.

Iran's Supreme Leader Ayatollah Ali Khamenei, who is also the country's commander in chief, addressed a crowd of supporters in the capital Tehran with a strongly worded message for the arch-enemy. "Last night's strike was a slap [in the face of the US]," he declared. Khamenei appeared to suggest that more was yet to come: "The US seditious presence must come to an end." He did not elaborate whether Iran will pursue the objective militarily or diplomatically.

The early morning strikes triggered brief jubilation, with some Iranians taking to rooftops chanting "God is Great," as they were relieved by the triumph from the promised revenge. There were also expressions of anxiety on social media, however, over a looming US-Iran war for a nation already feeling the pinch of economic sanctions.

Echoing Khamenei's message, President Hassan Rouhani gave a speech that was void of any obvious sign of reconciliation. "In their crime, [the Americans] cut off Soleimani's arm. The revenge will be cutting off their feet from this region," he said, referencing a graphic picture of the slain commander's limb severed in the intense US strike. Rouhani warned Washington not to blame Iran for possible future attacks from other forces. "We have no proxies, because nations are free today and no force in any country is under our command," he noted.

Following the Soleimani assassination, Iraqi parliamentarians passed a resolution calling for the expulsion of US forces from their country. And Tehran-backed Shiite militias are now threatening the United States with Iran-style attacks. One such group, Asaib Ahl al-Haq Brigades, said it was now Iraq's turn to avenge Soleimani's death.

Iranian Foreign Minister Mohammad Javad Zarif justified the strikes on the basis of Iran's legitimate right to defense. Zarif noted that the revenge was "concluded" and suggested that the US ouster from the region could be achieved through nonmilitary means.

Hard-liners in Tehran, however, say over 100 targets have already been identified for future attacks if need be. The chief of staff for the armed forces, Maj. Gen. Mohammad Bagheri, warned that if the United States makes "another mistake," it will have to meet yet more crushing counterattacks from Iran. And Mohsen Rezaee — a former IRGC commander (1980-1997) and now secretary of Iran's Expediency Council — further underscored the Islamic Republic's preparedness: "Hands are on the trigger."