Intel: How a new report bolsters US case that Iran attacked Saudi Arabia

A confidential United Nations report rebutted claims from Yemen’s Iran-backed Houthi rebels that they were responsible for a missile attack on two Saudi oil facilities in September. 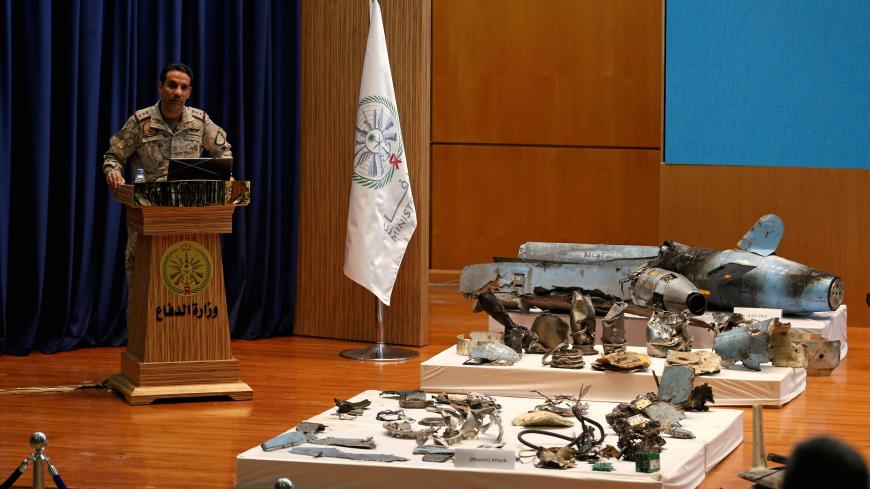 Saudi Defense Ministry spokesman Col. Turki Al-Malik displays the remains of the missiles that the Saudi government says were used to attack an Aramco oil facility, during a news conference in Riyadh, Saudi Arabia, Sept. 18, 2019. - REUTERS/Hamad I Mohammed

A confidential United Nations report rebutted claims from Yemen’s Iran-backed Houthi rebels that they were responsible for a missile attack on two Saudi oil facilities in September, Reuters reported Jan. 8. The report found that the missiles and drones used in the attack on Abqaiq and Khurais in northern Saudi Arabia did not “have a sufficient range to have been launched from Yemeni territory under the control of the Houthis.”

Why it matters:  Although Tehran has officially denied any involvement in the attack, the UN report bolsters US and European claims that Iran launched the attacks. The report comes as tensions between Iran and the United States have reached a boiling point following President Donald Trump’s assassination of Quds force commander Maj. Gen. Qasem Soleimani. While the majority of Democratic lawmakers — and even some Republicans — have pushed back against the Trump administration’s claims that Soleimani was planning an imminent attack, none have disputed the White House’s claim that Iran was behind last year’s Saudi oil facility attacks.

The report could also lend further ammunition for the Trump administration to justify its maximum pressure campaign against Iran, which includes crippling sanctions and the recent deployment of nearly 80,000 US troops to the region.

What’s next:  Trump stopped short of a military response to Iran’s retaliatory strikes on US forces stationed in Iraq this week, opting instead to increase sanctions on Tehran — though it remains unclear how much is left to sanction.

Know more:  Read Iraq editor Ali Mamouri’s overview of the latest bout of violence — and the prospect for negotiations — between Iran and the United States.