Are we seeing the calm before the storm in the Gulf?

The Gulf states need calm for economic growth and security, but it all depends on what the United States and Iran do next. 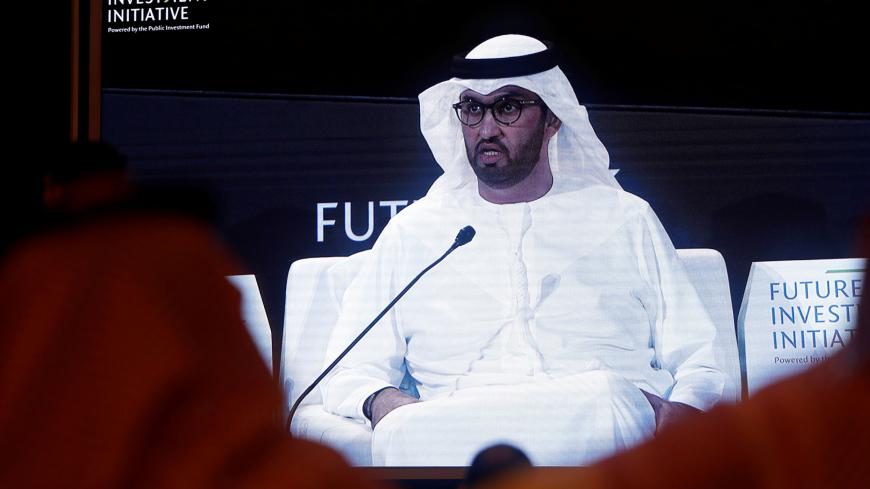 Less than three weeks after US strikes killed Iranian Gen. Qasem Soleimani, and Iran retaliated with strikes on US forces in Iraq, the war fever in the Persian Gulf seems to have passed. Or there is some powerful acetaminophen in the air.

At least that was my impression following visits to Saudi Arabia and the United Arab Emirates this month.

Over the weekend of Jan. 11 in Abu Dhabi, the UAE Minister of State Sultan Ahmed al-Jaber addressed an audience of energy analysts and media as part of Abu Dhabi sustainability week. His message was similar in tone to that of President Donald Trump, who had recently tweeted “All is well.” Jaber, who is also CEO of the Abu Dhabi National Oil Company, said, “I am pleased that geopolitical tensions have dissipated over the past few days, and that wisdom, balance and diplomacy appear to be prevailing.”

The rhetoric of de-escalation is welcome, given the recent state of high anxiety, but the risk of escalation remains high. The Trump administration wants to demonstrate to Americans that the president's high-stakes gambles are strategic, the risks are measured and the payoff will be a neutralized Iran without nuclear capability. The Gulf states, particularly the UAE and Saudi Arabia, want to focus on the business of exporting oil and to demonstrate to their customers, investors and citizens that they are insulated from tit-for-tat exchanges between the United States and Iran. The increasingly diversified economies of the Gulf depend on expatriate labor and consumption, tourists and foreign investors. And more than anything, they need to protect their citizens, as the region anticipates possible further backlash by Iran, and there is a general unease about the extent of America's commitment.

The United States and regional desire for de-escalation may sadly be off the mark. Even in a globalized and networked Middle East, we can underestimate our connectivity and interdependence. The trend lines are worrying. The United States is increasing sanctions. Iran will increase enrichment. (Even in early December in Doha, analysts close to the government in Tehran openly discussed enrichment ramp-up as a sound negotiating strategy.) The 2015 nuclear deal — the Joint Comprehensive Plan of Action (JCPOA) — will collapse, and the Iranian regime will go down kicking, lashing out at American targets in the Middle East and perhaps worldwide. The Gulf Arab states will face collateral damage, if not direct attack. President Trump will enforce perhaps his only real commitment in the Middle East — his red line on the attack on US citizens. And even if Trump gets an opportunity to reset relations with Iran, what are the prospects of success, and what kind of Iran will it be with? Either the United States will face an emboldened Iran with more nuclear capacity, or a collapsing Iran with power-hungry and wealthy former commanders of the Islamic Revolutionary Guard Corps competing for authority. Neither scenario is good for regional stability or global markets.

Saudi Arabia and the UAE understand well their reliance on oil exports to the east and the need to develop demand markets for petroleum products in the developing world. From the Horn of Africa, across the Middle East and to Pakistan, the future consumers of oil and petrochemicals will rise in importance alongside current consumer markets in India and China. Keeping the choke points clear from conflict in the Strait of Hormuz, Bab el-Mandeb and the Suez Canal has meant a willingness to engage with Iran through intermediaries, or at least not provoke Iran directly. Saudi Arabia refrained from outright accusations or retaliation against Iran for the attacks on Abqaiq and Khurais in September. And after attacks on tankers near the Strait of Hormuz in June and near Fujairah in May, the UAE reportedly sent a delegation to Iran over the summer and released some $700 million in frozen Iranian funds in October. There is also talk among energy insiders in Saudi Arabia about turning a blind eye toward ship-to-ship transfers in the Persian Gulf. Keeping Iran on the brink of collapse — but not in collapse — is the ideal for Abu Dhabi and Riyadh. It is an unsustainable strategy, buoyed by the stalwart nonchalance of global oil markets.

Oil prices have been relatively steady in this period of political tension. The ramp-up of threats and attacks on oil infrastructure and transport, from tankers moving chemicals to attacks on the mother ship of the oil industry in Abqaiq, to attacks on US military forces in Iraq has been gradual and methodical. Oil prices have blinked, but the general consensus is that there is plenty of supply, for now, and that the major Gulf producers and their customers (especially China) are urging restraint. But this is a temporary holding pattern. As the US maximum pressure campaign continues, there will be blowback. And the Gulf states will be the front line.

And instead of drawing the Gulf Cooperation Council (GCC) states together in a confrontation with Iran, US actions have essentially created a flurry of bilateral back channels and side talks. The effect is strengthening bilateral engagements and weakening an already embattled united GCC. Qatar is more firmly in Iran's orbit. The UAE is delicately distancing itself from Saudi Arabia and confrontation with the Houthis in Yemen. And no Gulf Arab state wanted to take credit for US forces launching the attack on Soleimani from their territory. Most importantly, the Saudis and Emiratis know that if Trump tries to secure a new deal with Iran, or a JCPOA part II, they will be excluded from negotiations once again.

But it is hard to envision a return to a pre-2016 status quo with Iran. After the killing of Soleimani, Iran is unlikely to bury the hatchet with the United States. There is simply no trust. Therefore, the Gulf states have decided to hedge, developing their own relationships with regional powers like Russia, and intervening politically and economically where they can promote and sustain markets for their prime export commodities. If this is what burden-sharing looks like, it bears a strong resemblance to a whack-a-mole approach to regional security.

The region is less safe, more vulnerable to miscommunication and misunderstanding of both partner and adversary intentions. The trust between the Gulf Arab states and the United States is waning. Some in the Trump administration may see an inevitable toppling of the government in Iran, but may be unwilling to contemplate a prolonged state of violence or state collapse, and the effects this would have on the region. As long as the administration perceives little risk to global markets and American lives, it is the Gulf Arab states that will pay the heaviest price. The current approach, at least in the attitudes in Riyadh and Abu Dhabi right now, is a return to quiet deal-making and appeasement with Iran that may avert a war directly between Iran and its Gulf neighbors, at least for now. In short, the current trajectory is unsustainable for both the United States and its Gulf partners. Until we see that we need each other and that global energy and commodity markets depend on cooperation among the supply sources and transit ways in the region, conflict is more likely than any new deal or shift in behavior from Iran.