There have been no elections in Gaza since 2006, but family groupings in the enclave have started holding votes for a leader and board to administer family affairs. 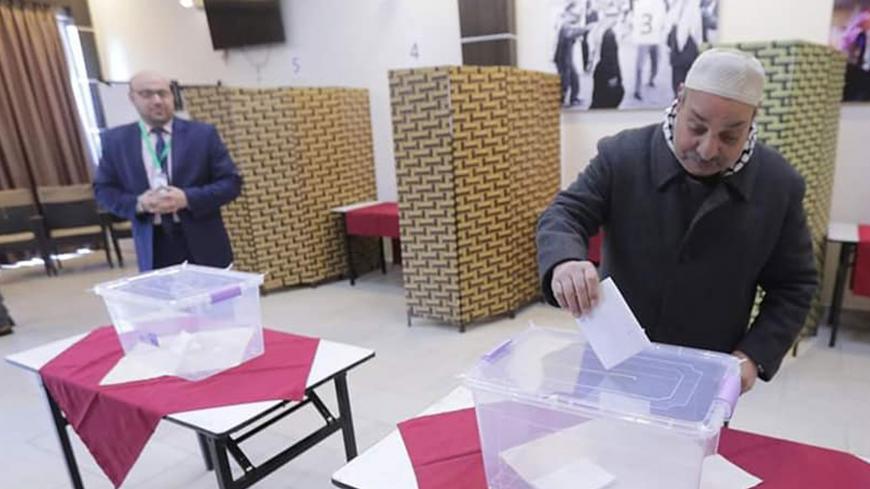 GAZA CITY, Gaza Strip — Is it a sign of grassroots democracy in an authoritarian social structure, or yet another sign of the exclusion of women in a patriarchal society? In the Gaza Strip, a family held elections to designate a family head and a board to manage family affairs, but kept the family's women out of it.

This Palestinian family is huge by Western standards. Even though women were not allowed to vote or be elected, more than 450 cast ballots for the family head and his “management" board. Males over age 16 carrying the same last name — Khadri — were able to vote.

“Palestinian society is a patriarchal community and there is no place for women [to take up a leadership position],” Dardah al-Shaer, a professor of sociology at Al-Aqsa University in the Gaza Strip, told Al-Monitor.

“Despite the shortcoming [the exclusion of women], the family election is a good way to organize the ties between family members and to preserve good relations with other families and tribes,” he said.

The family election comes at a time when all forms of electoral democracy have been disrupted in the coastal enclave. In 2006, Hamas, won a landslide victory in the elections in the strip, marking the beginning of the Palestinian division between Fatah, which rules in the West Bank, and Hamas. There have only been local elections in the West Bank and none in the Gaza Strip since.

With no electoral process since 2006, Gazans today ages 31 and younger have never voted as they were under 18, the legal age for voting, when the last elections were held.

In the West Bank and the Gaza Strip, Palestinians are still waiting for President Mahmoud Abbas to issue a presidential decree to set a date for the anticipated general and presidential elections, while Israel continues to refuse to allow voters to go to the polls in East Jerusalem, putting everything on hold.

The Khadri family’s members chose a “chief” as well as a board of 10 out of 20 candidates. A supervisory committee formed within the family surveyed the process, counted the votes and calculated the turnout, which was an impressive 85%.

Jamal al-Khadri, the head of the supervisory committee and a member of the Palestinian Legislative Council, told Al-Monitor that the elections took place in three stages. The first was to choose the head. Then people cast a vote to choose six senior members — those above the age of 50 — for the board. A third vote was cast to elect four junior council members between the ages of 20 and 50.

“The election is a significant step toward the consolidation of family democracy and to give young men an opportunity to exercise their electoral rights, which have been suspended since 2006,” he told Al-Monitor.

Khodr al-Khadri, 66, was elected as the family head and head of the management board. He is a retiree from the Palestinian Ministry of Health and holds a bachelor's degree in trade. “This is the first time a chairman and members of the board are elected in the family,” he told Al-Monitor, noting that 457 members of the Khadri family had cast votes.

In order to present himself as the head, a candidate had to gather 200 signatures from adult members of the family.

Khodr al-Khadri said the elected family management board will be tasked with strengthening the social bonds between its members and providing assistance and advice. It will also intervene to resolve differences and conflicts that may arise.

The board, rather like a parliament, will form committees on social, legal and educational matters. It will also establish a family fund that will collect money from well-off members to be distributed to the needy.

While there is no specific time frame for holding elections, Khodr al-Khadri said the elected board is currently preparing regulations to set a term for the board and to regulate its work and define its tasks.

Zuheir al-Khadri, 45 and the youngest member on the family board, is an employee at the Ministry of Interior in Gaza and got the most votes of the junior council candidates.

“These family elections are a dream come true for every Palestinian young man seeking to have status in society in the absence of any form of democratic elections on the Palestinian territories,” Zuheir al-Khadri told Al-Monitor.

He said the family allowed those over the age of 20 to run for a seat on the family’s management board in a bid to strengthen the role of young people in society and offer them an opportunity to take up a tribal position within the family. He said 70% of the family members are young people, but that when it came to voting for the junior members of the council they chose to vote for older candidates.

Other families in the coastal enclave have held elections to elect a management board, including the Skik, Attallah and Akila families.

The Skik family held its elections Jan. 3 in Gaza City, with the participation of 2,000 members to designate the head of the tribe, and 10 members out of 25 candidates for the family board.

“This is the first time I have voted. I was 14 when the last elections took place in the Gaza Strip,” 28-year-old Abdel Ghafour Skik told Al-Monitor.

He said the vote was carried out under the supervision of a committee that has representatives of the Ministry of Interior, the Ministry of Justice and the Supreme Committee for Tribal Affairs, an official body affiliated with the Palestinian Liberation Organization.

“I believe it is necessary for all families in the Gaza Strip to hold elections in a bid to preserve the unity of their families, while our political leaders failed to maintain the unity of the homeland,” Skik concluded.