Is Israel dangling economic carrot to lead Hamas to a truce?

Israel has allowed Gaza to import and export previously banned goods for the first time in 13 years, and some have interpreted the move as part of an effort to entice Hamas into a truce. 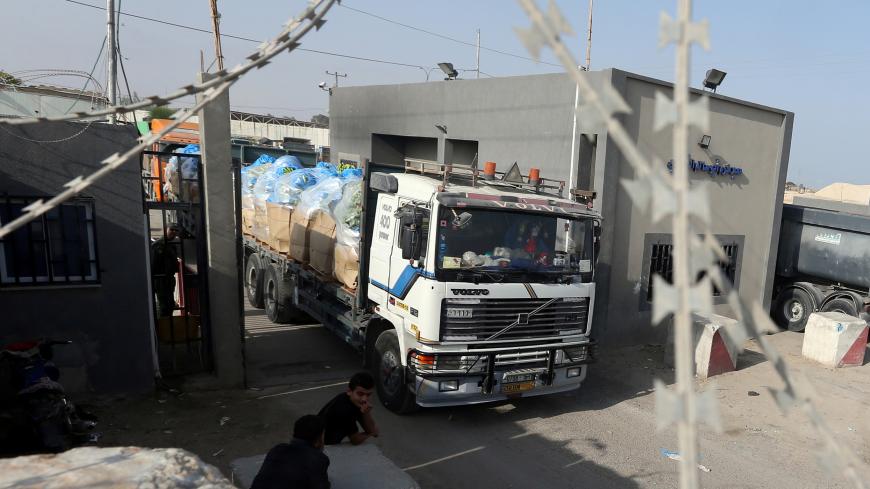 GAZA CITY, Gaza Strip — For the first time in more than a decade, Israel has allowed the export of products made in Gaza, bound for the Gulf, European and Israeli markets via the Kerem Shalom commercial crossing. Moreover, according to Dec. 29 reports by Palestinian and Israeli media outlets, Israel allowed some dual-use materials into Gaza. The moves followed a Dec. 26 announcement by Palestinian factions of a three-month suspension of weekly demonstrations on the border with Israel as part of the Great March of Return, launched in March 2018. After the suspension ends in March, protests will only be held once a month and on national occasions.

According to some observers, Israel appears to have viewed suspension of the demonstrations as a welcome sign of Hamas’ desire to reach a long-term truce agreement. The Israeli Security Cabinet had met on Dec. 29 to discuss “the calm” with Hamas, but did not disclose the results of the talks.

Hamas denies any contact with Israel with regard to the prevailing calm. A Hamas official who spoke to Al-Monitor on the condition of anonymity said the suspension of the protest marches was aimed at preventing demonstrators from being killed and at avoiding friction with the Israeli military independent of any future truce agreement. Also according to the source, “The economic incentives that Israel is trying to promote for the Gaza Strip do not meet the Palestinian demands that were submitted to the mediators over the past two years.”

Palestinians have variously sought an end to the blockade imposed on Gaza since June 2007, removal of bans on imports and exports, a 15-nautical-mile zone for fishing and resolution to the chronic electricity shortages plaguing the coastal enclave. The creation of job opportunities for the unemployed and for graduates and allowing the entry of Qatari funds amounting to $15 million a month to assist poor families were among the conditions Palestinian factions included in understandings reached with Israel in October 2018.

Following a cease-fire agreed to on Nov. 14 this year, following a round of violence after Israel assassinated the commander of Islamic Jihad's military wing on Nov. 12, Israel expanded the fishing zone off Gaza to 15 nautical miles and allowed large fishing boats to trawl for the first time since 2007. It also permitted the entry of equipment to build an American-supplied field hospital in northern Gaza.

Nizar Ayyash, head of the Palestinian Fishermen's Association in Gaza, told Al-Monitor that fishermen have experienced a significant reduction in Israeli harassment since mid-November and are waiting for Israel to soon allow the entry into Gaza of much needed materials previously prohibited, especially fiberglass, which is used in the manufacture and maintenance of fishing boats, and steel cables and wires.

Tarzan Daghmash, spokesman for the Union of Automobile Tires Companies in Gaza, told Al-Monitor that Israel had informed the association about lifting the ban on automobile tires, which had been barred since April 2018 as a “dual use” product in response to their being burned at demonstrations during the Great March of Return. Daghmash explained that with the banning of tires, Palestinians had to import them from Egypt at double the price, that is, $430 for a set of four, rather than the standard $200 before the ban.

Wael al-Wadiya, director of the Sarayo Alwadiya Group, which produces food products, told Al-Monitor, “This is the first time that Israel has allowed us to export our products since 2007.” On Dec. 30, Wadiya's company exported eight tons of sweets to Bahrain, which allowed it to increase its production capacity, which had fallen to 30% over the past few years as a result of the economic crisis gripping Gaza and the ban on exports.

In a Dec. 31 press statement, Ali al-Hayek, head of the Palestinian Businessmen Association in Gaza, predicted that if Israel continues with the current approach Gaza could move toward economic recovery in 2020 and improve the living conditions of residents, who are burdened by poverty and unemployment that reached 75% in 2019, according to the Ministry of Social Development.

The Palestinian Authority (PA) has angrily attacked the economic opening of Gaza. On Dec. 31, Palestinian Prime Minister Mohammad Shtayyeh asserted that Israel's goal in relaxing the import-export bans is to deepen the Palestinian division and separate Gaza Strip from the West Bank and Jerusalem, thus undermining the Palestinian national project.

Talal Okal, political analyst and writer for the Ramallah-based newspaper Al-Ayyam, asserted to Al-Monitor that indicators on the ground and the Israeli measures suggest that Hamas and Israel have actually made tangible progress in talks. He believes that Hamas' denial of contacts with Israel regarding the calm suggests that the Islamic movement is merely waiting for the right time to announce a truce agreement to its public.

Okal explained that any truce would naturally have to benefit both parties' interests. In this regard, Hamas has to produce economic progress in Gaza, especially after the suspension of the return marches, while Israel needs a period of calm from Hamas so it can deal with trying to prevent Iran forces from acquiring a permanent foothold in Syria and to prepare for the third round of parliamentary elections in less than a year.

Meanwhile, Iyyad al-Qara, a writer for the newspaper Felesteen in Gaza who is close to Hamas, described the Israeli incentives as “fake.” “What Israel is offering for the Gaza Strip is basic rights, some of which were agreed upon through mediators as part of the understandings for calm,” he told Al-Monitor.

It appears that the Israeli military establishment has succeeded in convincing political leaders to make use of economic incentives in a bid to reach a truce agreement with Hamas. As things currently stand, Israeli leaders do not want a military confrontation with the movement given predictions in some quarters that 2020 will bring a high probability of war on Israel's northern border involving Iran and its allied proxies forces.