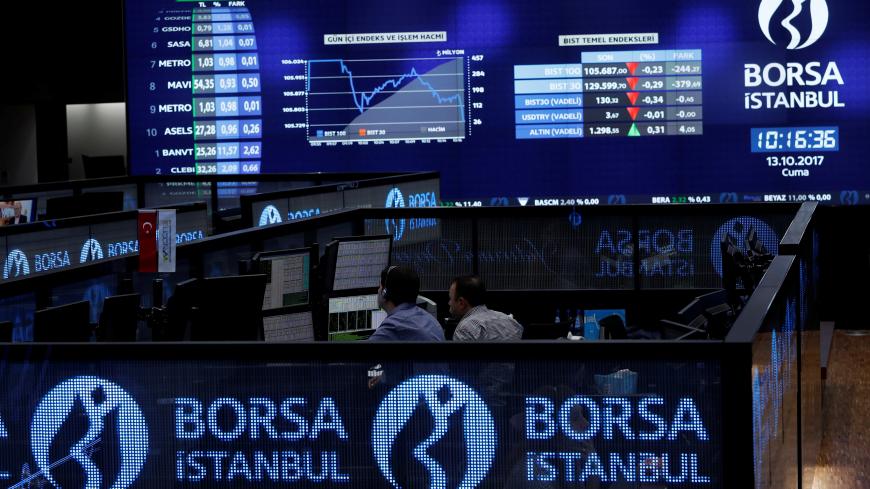 Traders work at their desks on the floor of the Borsa Istanbul in Istanbul, Turkey, Oct. 13, 2017. - REUTERS/Murad Sezer

Turkey finally has a national credit rating agency that it has been dreaming of for years. Borsa Istanbul and other Turkish finance institutions bought 85.05% of Japan Credit Rating Agency (JCR) Avrasya.

President Recep Tayyip Erdogan has frequently lashed out at the low grades Moody's and S&P have assigned to Turkey. In 2012, Erdogan first talked about creating an “indigenous and national” credit rating agency.

As Turkey’s credit rating was downgraded in the following years, establishing a national credit company or buying an existing one has become a priority. And on Nov. 29, Turkey accomplished its dreams and bought JCR Avrasya.

Considering it has been bought as an alternative to Moody’s, S&P and Fitch, the investment may seem like a bad idea. Many believe that unlike these “low graders," the Turkish agency would be generous with the ratings. This expectation was clearly articulated in government-controlled media. The headline of pro-government newspaper Hurriyet read: “National step against the low graders.” One of the few critical newspapers, BirGun, meanwhile, put the expectation more clearly: “First step toward the desired ratings.”

According to Turkey’s former minister of economy, Masum Turker, JCR Avrasya can indeed rate Turkish companies as well as Turkey itself, but Turkey needs more than one credit rating agency.

“We need at least two national credit rating companies," he told Al-Monitor. "Foreign investors need approval from at least two different companies. We can partially get rid of the downgraders when there are more national companies​ and make sure Turkey has the ratings it deserves. Our companies can grade other European countries and the United States as institutions such as S&P and Moody’s grade us without getting our approval first. The speculative attacks against our economy can be stopped this way.”

According to Fitch, S&P and Moody's ratings, Turkey remains below the investment grade. JCR Limited, on the other hand — partner to JCR Avrasya — gave Turkey a B- in November 2018, which is an investment level grade, and it hasn’t changed its grade since then.

According to Durmus Yilmaz, Turkey’s former central bank governor and a lawmaker from the nationalist Good Party, JCR Avrasya has to work meticulously to achieve credibility among its global rivals.

“Moody’s, S&P and Fitch have an international reputation built since the 1860s. Whether the finance players will trust the Turkish company in the future remains a question,” he told Al-Monitor.

Yilmaz also had a warning: If JCR disregards objective criteria and favors Turkey, it would do more harm than good.

“We have to break the impression that this company was bought as a way to get higher ratings," he said. "The market will question this. Foreign investors will only respect its ratings when the company gains trust in the market.”

Former Minister of Economy Ufuk Soylemez provided a more pessimistic perspective. “If the purpose is to have an alternative to Moody’s, S&P and Fitch, this will not work," he said. "There are 10 companies determined by the US Securities and Exchange Commission [SEC], and 95% of all reporting on credit is done by these three companies. They are a cartel. Millions of dollars worth of funds in Europe and the US only invest in countries that are approved by two of the credit rating agencies in the SEC’s list. JCR Avrasya is not one of them … Also, we are the debtor country instead of a lender one so it is difficult for one of our rating agencies to be approved by the SEC.”

According to Faik Oztrak, the spokesman of Republican People's Party (CHP), there is a concern that some companies will be funneled more resources through reporting.

“While there are many companies that can work with banks to do customer evaluations, the use of JCR Avrasya alone will prevent competition in this sector and increase the cost of companies to carry out transactions," he said. "In the end, evaluations by a publicly dominant company have the potential to create moral risk.”

Another controversy revolves around the purchase process of the agency.

Although Turkey’s pro-government media reported that the majority of shares were bought from a Japanese credit institution, JCR was actually a Turkish company from the start.

Examining its annual report, 85.05% of the shares were already owned by Turkish shareholders. The company started its operations in February 2007 as Avrasya Rating Inc. In November 2007, the company signed a partnership agreement with Japanese rating agency, JCR. When 14.95% of shares were transferred to JCR, the company's name changed to JCR Eurasia.

Both the buyer and seller are Turkish; this purchase is simply the acquisition of a company that is already Turkish.