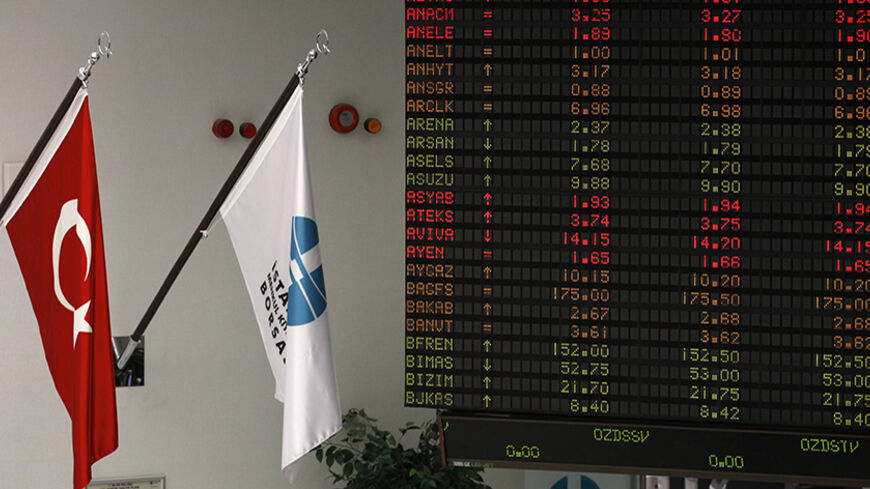 Share prices are seen on a screen alongside flags at the Istanbul Stock Exchange, Oct. 14, 2011. - REUTERS/Murad Sezer

While Fitch Ratings, Moody's and the Japan Credit Rating Agency (JCR) are keeping them at “investment” grade, and Standard & Poor's (S&P) at one level below, negative signals over Turkey’s credit ratings are not dissipating.

Ratings agencies have begun to use the word “lowering” following the Central Bank’s decision to reduce the ”political interest rate” — so much so that even Fitch Ratings, which had earlier upgraded Turkey to “investable,” is now warning of downgrading.

A day after the Central Bank meeting on May 22 that resulted in a decrease of the interest rate by half a point, Fitch issued a warning: “As inflation rises toward double digits, a reduction in interests affects predictability. … Turkey continues to be vulnerable to adverse external shocks. Political consistence in Turkey is weaker than countries with similar conditions. Increases in credits could be a negative element toward decreasing the grade.”

Paul Rawkins, Fitch Ratings’ senior manager for country grading, said on May 1 that in case of less predictability of government policies, there will be pressure on credit ratings.

"If the economic team is removed from duty, this will cause us concern,” Rawkins said.

These warnings have significance because the Turkish economic administration feels Fitch Ratings has been more objective to Turkey than other agencies. For instance, Fitch Ratings did not make any amendments after increasing Turkey’s credit rating on Nov. 5, 2012, for about 18 months despite major events that caused market turbulence. They even helped instill confidence in the market by comforting statements at critical junctures.

Now Fitch is using the term “lowering.” Not only Fitch but S&P, too, is warning Turkey. S&P, which released its Turkey report on May 23, was expected to increase its grade or at least upgrade it from “negative” to “static.” That did not happen, and Turkey’s outlook remained “negative.”

S&P, which upgraded Turkey’s grade on March 27 from BB to BB+, lowered the outlook from “static” to “negative" in its evaluation of Feb. 6. That means Turkey has been at “negative” level for four months. Experts say unless there is an increase in the rating a reduction may be in the offing in the coming 1½ years. S&P's latest statements signal of this possibility.

S&P explained its reason for keeping Turkey’s outlook at “negative” by referring to less predictability of the political outlook, which in turn puts pressure on flexibility against external shocks and thus harms long-term growth. It also noted that although the prediction for average growth in 2014-15 is said to be 2.6%, there is the possibility of an extreme decline in the Turkish economy. Such a sharp economic downturn will negatively affect the performance of the financial and public sectors. This will most likely mean a reduction in ratings.

Credit ratings on the eve of the presidential elections

This year, Moody’s will issue two reports on Turkey, on Aug. 8 and Dec. 5. The issuance of the first report has gained more prominence because it will be published two days before the first round of the presidential elections on Aug. 10. A negative declaration by Moody's is likely to become an election issue. It's easy to forecast that if there is a reduction in Turkey’s credit ratings, this will be cited as “intervention of foreign forces in presidential elections.” Some may even say that such a perception of intervention will be to the benefit of the ruling party.

Moody’s on May 16, 2013, graded Turkey again as “investable,” but 11 months later changed the outlook from “static” to “negative." However, the Baaa3 grade has been valid for 13 months. It's not expected to change until the first report of Aug. 8.

Did the Central Bank act prematurely?

The Central Bank’s lowering of the interest rate by 50 base points on May 22 was criticized also by Goldman Sachs along with credit ratings agencies. Goldman Sach stated that "it was premature for a decrease," and predicted another 50 base points might be slashed during the meeting at the end of June.

Pro-government media said the Central Bank was late in making the reduction, and that the decrease should not be 50 base points but at least 1.25 points.

Taking the market into consideration, one can sense that the downward trend of interest rates and foreign exchange parity will continue.

Nevertheless, there are warnings that should the Central Bank opt for a bigger rate decrease, there may be higher risks. The biggest risk in the short term could be the Federal Reserve’s possible decision to end the monetary expansion in October and for the US interest rates to start increasing as of 2015. In that scenario, the foreign currency flow to Turkey and other developing markets could stop, even reverse.

On the other hand, there are factors that could benefit Turkey such as the European Central Bank’s monetary expansion expectations, the change of direction of hot money going to Russia because of tensions in Ukraine, decrease in political tensions, less tight monetary policy, the government’s growth expectation of 4% and an increase in exports and private profits.

Despite the reduction it made, Turkey's political interest rate of 9.5% is the second-highest interest rate in the developing world behind Brazil that is offering 11%.

If there is yet another reduction of 50 base points, unless the United States and the European Central Bank react negatively, the hot money is expected to flow to Turkey.

But if the Central Bank resorts to untimely and higher interest rate reductions because of political pressure it is under, new scenarios will be inevitable.