The Syrian opposition backs the Caesar Act, recently approved by the United States, but questions whether the US administration is serious about implementing it and how it might affect the Syrian government and its allies. 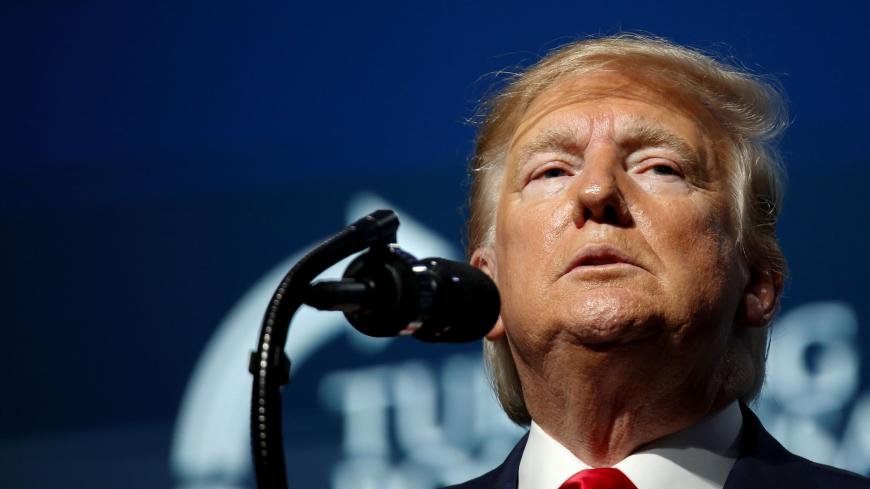 ALEPPO, Syria — A long-awaited US law designed to punish Syrian President Bashar al-Assad, who stands accused of crimes against humanity and other atrocities, has the potential to effect change, but only if the United States follows through decisively, Assad's opponents say.

On Dec. 20, US President Donald Trump signed the Caesar Syria Civilian Protection Act, sparking wide controversy in Syrian opposition circles in Idlib and Aleppo provinces as many wonder what impact, if any, the law might have on the conduct of the Syrian government's security and military structure. Observers also are pondering whether this act could weaken and ultimately topple the government, thus fulfilling the calls of the opposition.

US Secretary of State Mike Pompeo called the act "an important step to promote accountability for the [Assad regime], which has committed large-scale atrocities in Syria.”

The new law calls for sanctions on any party — from companies to individuals to countries like Russia and Iran — that offer the Syrian government military, financial, technical or reconstruction support. The law explores the best ways to offer aid to Syrians and support entities that collect evidence for investigations into war crimes and crimes against humanity since the civil war there began in March 2011.

The law was named after a Syrian military photographer codenamed Caesar who defected in 2013 and leaked 55,000 graphic pictures of 11,000 detainees who were tortured to death in Syrian government prisons.

Opposition circles agree that the US measures against the Syrian government came late. Though they applaud the law, many doubt Washington's seriousness about enforcing it.

Abir Fares, a civil activist who lives in western Aleppo, told Al-Monitor, “I don’t have high hopes, because politics and interests are bigger than the law, human rights and values. It seems that issuing this law aimed primarily at protecting the US reputation as a state sponsoring human rights and international law and to save face, following the [Syrian] government’s atrocious massacres, destruction of towns, arrest of thousands and killing and displacement of others. The international community — notably the United States — did not move a finger [for years].”

Abdul Monem Halabi, professor at Gaziantep University in Turkey who moves between Gaziantep and Aleppo province, told Al-Monitor he believes the act will have consequences, but not strictly the intended ones.

“The implementation of the Caesar Act will definitely have huge economic repercussions on the Syrian government, and the living situation of people will also be affected. The economic ripples will reach the states supporting the government, like Iran, Russia and perhaps even China,” Halabi said.

But he added, “The regular Syrian citizen will be the first victim of this law, if the adopted mechanisms and sanctions don't focus on weakening the government rather than targeting the Syrian people." If the government is targeted, however, "The Caesar Act increases the possibilities of causing an internal rift in the government and increases the chances of changing it.”

Seba Nker, a civil activist from Idlib province, told Al-Monitor, “I think the Caesar Act will remain unfulfilled, like many international promises and decisions that we have heard about since the beginning of the Syrian revolution. If those had been implemented, they would have alleviated the suffering of Syrians and toppled the government."

Zahra Mohamad, a civil activist who is displaced from rural Damascus and now lives in Aleppo province, told Al-Monitor, “We cannot rely on the Caesar Act to punish the Syrian government, as it is a political and economic pressure card on the government and its allies, rather than a judicial tool to arrest and prosecute people.”

If the law is properly implemented, Mohamad said, “Syrians will not be in a worse position. Modest Syrians who live in government and opposition areas are already poor and will not see much difference in their living circumstances after implementation of the law.”

Media activist Ibrahim al-Khatib, who lives in Aleppo province, told Al-Monitor he is optimistic about the law's potential long-term impact. “I think the Caesar Act will affect the government and weaken it. I also believe the ripples will appear in the long run.”

Another media activist, however, holds a different opinion. Sharif Halabi, who currently resides in al-Bab in northeast Aleppo province, told Al-Monitor, “The law is good, but the government can't be toppled and its crimes can't be halted through sanctions. We are worried that some states supporting the government — like Russia, Iran and China — might circumvent the law and nullify its effectiveness.”

Momtaz Abou Mohammad, a political activist based in Azaz in northern Aleppo, told Al-Monitor, “The law is a weapon in the hands of Americans. The important question is whether the United States will adopt an implementation mechanism and what that mechanism is.”

The law has a five-year life and is subject to renewal. Abdul Hakim Masri, minister of finance and economy in the opposition-formed Syrian Interim Government, told Al-Monitor, “The act … should impact sources of funding, energy and transportation, if it is well implemented and if the US administration really wants to punish the Syrian government," especially since Syria imports most of its materials. "But if the United States isn't serious, the [Syrian] government will circumvent the sanctions and the law will remain mere words.”

Masri added, “In Syria, we didn't see any serious steps from the international community, while Russia and Iran continue to support the government in destroying what is left and committing massacres.”