Some residents of Ras al-Ain braved the ongoing chaos there to check on their houses, but found them destroyed or confiscated by opposition and pro-Turkish factions. 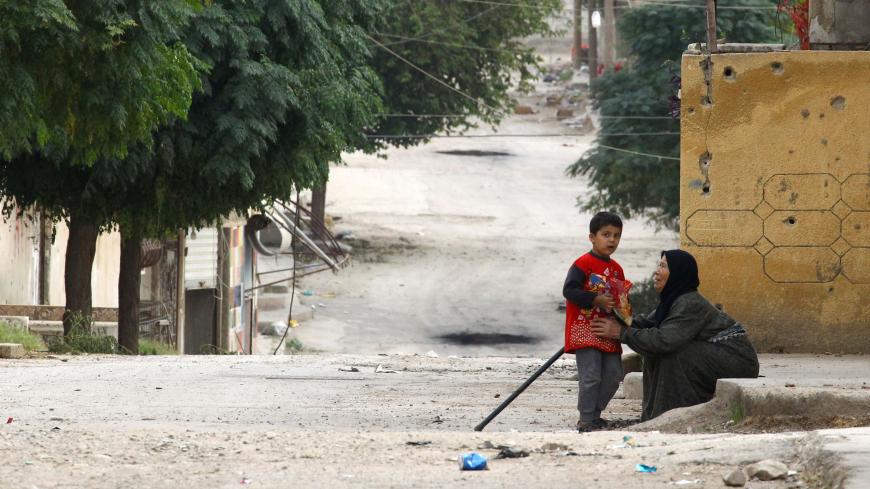 An elderly woman and a child are seen along a deserted street in the town of Ras al-Ain, known as Sri Canet in Kurdish, Syria, Oct. 24, 2019. - REUTERS/Aboud Hamam

QAMISHLI, Syria — Factions of the National Army of the Syrian opposition entered the Kurdish town of Serekaniye — the Kurdish name for Ras al-Ain. Troops supported by Turkey also entered the city the same day as part of Turkey’s Operation Peace Spring.

On Nov. 8, the Syrian Observatory for Human Rights reported that the pro-Turkish factions are confiscating houses, agricultural lands, tractors and diesel tanker trucks.

Muhammad Ali Aba Nowruz, 67, told Al-Monitor that he went back to visit the city on Nov. 23. He said, “It is not only about the looted properties. It is about the fact that they chose this peaceful city. It is not easy for a person to be kept from a place they have a life of sweet and bitter memories in.”

Aba Nowruz paused to light a cigarette, trying to pull himself together as he talked about the misery he saw there. “The checkpoint set up by the autonomous administration slowed our arrival to the city. Officers at the checkpoint said that entering the city was forbidden. But I managed to get in. We had to pass through seven checkpoints set up by gunmen affiliated with the Syrian opposition. At one of these checkpoints, we were asked if there were any Kurdish people on the bus, and they interrogated the Kurds on the bus before we were allowed to pass.”

Aba Nowruz looked bewildered as he said Sri Canet is a city of peace. “I remember having tightly closed my door before leaving the city, and the house was perfectly furnished. I stood there contemplating the monstrosity of the scene. The door was broken, the furniture demolished and there were valuable things looted. The scene was similar in all other neighborhoods, some of which were burned, others demolished. Shops were looted and malls were set ablaze. I was told that a curfew is imposed at 6 p.m. as the exchange of heavy gunfire starts and people hear shops getting broken into as the looting starts. Some stores and properties have completely crumbled to rubble. There were two small restaurants open, only to cater to the pro-Turkish factions. I visited my father’s house and found that the furniture had been destroyed, electrical appliances stolen.”

“Kurds are suffering great injustice. Everyone is watching us, and they have all failed us: the international community, the Americans and the coalition forces. The atrocities we are facing amount to ethnic cleansing,” he said.

Sri Canet is one of the Kurdish cities hardest hit by the battles. On Nov. 9, an armed group called Ghuraba al-Sham took control of the northern side of the city in coordination with Jabhat al-Nusra.

Joan, a native of Sri Canet, took refuge in Qamishli. Refusing to provide his full name, he told Al-Monitor, “I am almost 50 years old, and after I worked for a decade and a half in the Gulf, I managed to finally build a house. But I lost it all in a split second. I visited the city in late November and discovered that the armed factions had changed my house’s door locks. I banged on the door, two bearded men opened, pointed a gun at my chest and told me to leave. I asked them if it was possible for me to take some important documents so they asked me for $600. I came to the conclusion that there was no hope of recovering the house. Before I left, they told me, ‘We will not accept that our wives live in tents while you live in houses. We will bring our families here.’”

Abu Jameel is a pseudonym for another displaced man in his 50s. “The road to the city was quite rough but I wanted to go back for a visit. The armed battalions and factions were stopping those heading to Sri Canet, especially the Kurds, to ask them for money,” he told Al-Monitor.

“I have never seen such atrocities," he said. "The shops and houses have been looted while buildings have been destroyed by shells or clashes. Anyone who needs anything must go to Tell Halaf, located a few kilometers away from Sri Canet, but there are no means of transportation, and the military factions’ approval is needed to reach Tell Halaf,” he said.

Asked about his house, he said with tears in his eyes, “I didn't recognize the house. I lived there for almost 20 years and I didn’t recognize it. It is now completely empty."

“One cannot tell who the commander or the decision-maker there is. There is a different faction in every street, neighborhood or region. There is no hope of returning so long as those armed battalions are in the city. I have been told that Turkey and Russia are to form a military police to control the city and the Sri Canet residents’ return,” he added.

He pointed out that he only managed to stay for three hours in the city. “I couldn’t control myself. My house and the houses of my friends are either destroyed or looted. The industrial zone is emptied of its industrial machines and equipment. How was I to stay there? On the walls of some houses was ‘reserved for families.’ Those houses were reserved for the families of the pro-Turkey and opposition armed factions.”

A doctor from Sri Canet only provided his first name, Saeed. He said he'd forgotten his laptop as he fled the city. “Someone I don't know called me the other day. He must have gotten my number from the clinic sign. He told me ‘We are in your house right now, so don’t ever come back.’ I asked him for my laptop, but he asked me for $1,200. That cracked me up because I had bought it for much less,” he told Al-Monitor.

Observers estimate the ​​arable land in Sri Canet at 1,440,000 dunums. And there are dozens of silos full of hundreds of thousands of tons of seeds and fertilizers. The erstwhile residents believe it's all been confiscated.