Local organizations and private citizens are scrambling to care for the wounded and provide for the displaced as Turkish strikes reduce homes to rubble. 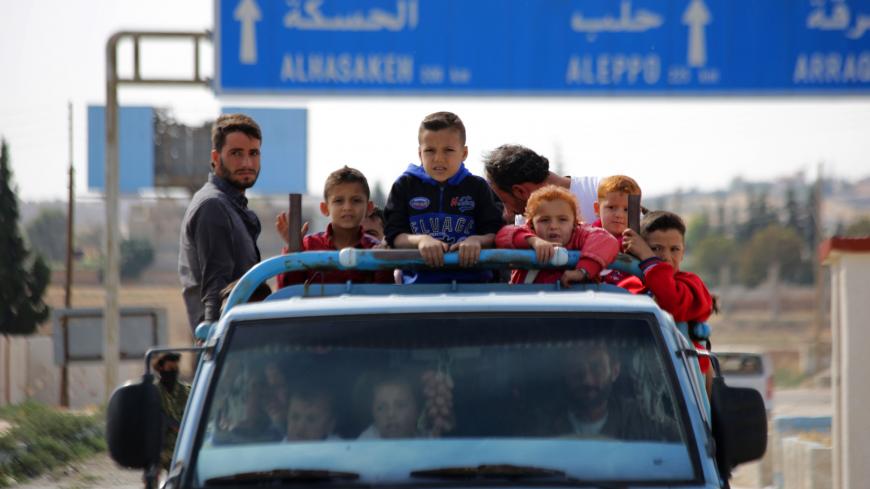 Syrians return to their homes in the town of Ain al-Arus, south of the border town of Tell Abyad, Syria, Oct. 14, 2019. - BAKR ALKASEM/AFP via Getty Images

QAMISHLI — The Turkish armed forces and the Syrian National Army forces affiliated with the Syrian opposition have launched a ground offensive in northern Syria east of the Euphrates River and artillery attacks on the towns of Qamishli, Terbespi, Amuda and Derek that have endangered civilians in city centers, villages and border neighborhoods.

Sarah Hussein, 7, and her brother Mohammad, 12, were playing outside their home in the Qadourbek neighborhood in Qamishli when a mortar shell landed near them. “I thought it was a butterfly. I begged my brother to leave it to me; I adore beautiful butterflies. He agreed, in exchange for the ice cream my father had bought me before he went to work,” Sara recounted. “I thought it was a butterfly and I smiled at it, but I soon realized how fast it was flying down,” she told Al-Monitor.

Passers-by and neighbors took Sarah and her brother to Salam Hospital in Qamishli. Her brother lay dead on the bed next to Sarah's. Traumatized, she was unable to describe the horror of her plight.

Her left foot was completely smashed, while her right needed a number of steel plates to be saved. Sarah's aunt moaned, “My brother's home was wrecked. He lost his beloved son at such a young age.”

As Sarah was readied for the operating room, she screamed at her only brother, “Wake up! I promise I won’t take back my ice cream, just wake up!”

At the family's home, the bereaved father received mourners who tried in vain to get him to talk. He just stood there with an empty gaze.

Fahed and several family members were hit in the village of Kerki Zira on the Syrian-Turkish border in Qamishli.

Fahed told Al-Monitor, “When the Turkish shelling started, we fled the village as fast as possible. We did not take any medicine or clothes. We stayed at our relatives' house in Qamishli for three days and then we decided to return to the village to get some things.”

Fahed’s village is about 15 kilometers (nine miles) from the city center and only two kilometers (1.2 miles) from a Turkish police station. At the start of clashes, bombs hit the village, forcing its residents to flee.

He continued, “I visited the village with my brothers Nawaf and Dujar and our cousin Sherko. We crouched against a wall to escape the Turkish military and tried to check the damage to our tractor. A friend passing by in his car advised us to leave immediately, warning us of the shelling.”

Fahed took a deep breath, looked around and tried to comfort the daughters of his injured brother. “Moments later a mortar shell landed near us,” he said.

“I was hit by shrapnel but my injury was minor. I did not allow them to treat me.” He described the moment he regained consciousness, his clothes torn and covered in dust. “I knew I was bleeding, but I was fine. I searched for the others. Dujar and Sherko were fine. Nawaf was lost under the rubble. We found him on his stomach, his head covered in blood with his skull open.”

The two injured brothers were taken to al-Rahmah hospital in Qamishli, where surgeons picked shrapnel from Nawaf's brain and closed his skull. When his daughters saw him they were terrified. “I want my dad,” Jamin sobbed. “We have nothing to do with this war. We are not part of it. We want the destruction and war to end. My father is a very peaceful man. He just went there to get us clothes and he came back hit.”

According to the Syrian Observatory for Human Rights, the Turkish military operation in the areas controlled by the Syrian Democratic Forces in northeastern Syria has forced thousands of civilians to flee for safety.

The observatory updated its database on Oct. 13, raising the number of affected civilians including about 60 civilians killed. It noted that 96 hours into the start of the military operations east of the Euphrates, more than 130,000 people were displaced and the number is rising.

Hussein Hama, a resident of Sri Canet, lost control when he heard that three of his children died in the shelling on the city. “My life is over; my family is gone. Please kill me too. Kill me, my life has lost all meaning,” he shouted while beating his chest and head.

The displaced are sheltering in schools, including 15 in Hasaka, eight in Tell Tamr and three in Terbespi, as well as other public spaces and private houses.

One woman who fled Darabisyah for Hasaka said, “We left our homes when the clashes and shelling broke out. We are now staying at a school with nowhere to sleep and no food. We didn’t have any sanitary or electrical supplies. Later on, we received some food and blankets from the local residents,” she told Al-Monitor.

Local civil society organizations and the Kurdish Red Crescent are scrambling to assist the displaced civilians. It is worth mentioning that a number of local organizations have conducted a survey and identified the needs of the displaced and provided them with clothes, food etc.

However, the Barzani Charity Foundation is arranging to bring in aid including blankets, clothes, mattresses and baby formula.

Several civilians on their way from Tell Tamr to Sri Canet were killed and injured by Turkish shelling Oct. 13. According to physicians at the Tell Tamr hospital, 10 people have lost their lives and more are in critical condition while 100 others, including journalists, are injured.