Russia has halted its conversion operations at Iran's Fordow nuclear facility, but this doesn't signal a crack in Moscow-Tehran relations. 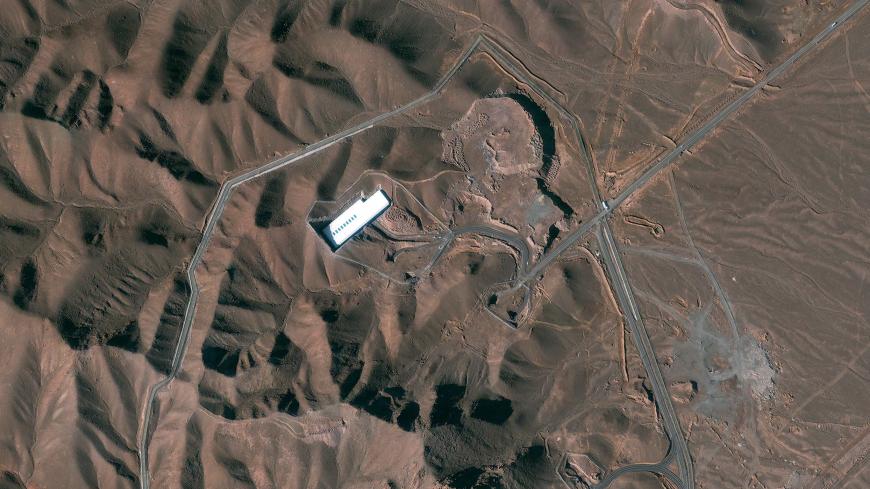 Russian company TVEL, a subsidiary of Rosatom State Atomic Energy Corporation, has suspended a research project with Iran that was designed to convert the latter's Fordow uranium enrichment site to produce medical isotopes. But the decision doesn't mean Moscow is reducing its support for Iran in the face of American pressure.

Since the United States withdrew last year from the 2015 Iranian nuclear deal with world powers — the Joint Comprehensive Plan of Action (JCPOA) — Tehran has been reducing its commitments under the deal. For one, it decided Nov. 6 to resume uranium enrichment at Fordow. TVEL, which has been working on converting the site since 2017, announced Dec. 5 it was withdrawing because the enrichment activity is incompatible with producing radioactive isotopes for medical purposes.

"The [project] has been suspended but not stopped. We need to analyze the situation and look at the American statements that, as of Dec.15, they’d be applying their illegal sanctions to the key JCPOA deal,” Deputy Foreign Minister Sergey Ryabkov explained to TASS, alluding to yet another motivation Russia might have for its Fordow decision.

At the same time, the Fordow project doesn’t seem to have been of high importance to any of the JCPOA parties. In fact, Iran itself virtually decided to sacrifice it as part of reducing its commitments under the nuclear deal. So Russia, after two years at the site, took its hands off the project as well, and did so rather quickly.

Yet Russia still stands by Iran on other bilateral cooperation, manifesting a more or less consolidated opposition to the United States.

For instance, the Russian Ministry of Foreign Affairs supported the Iranian government in the wake of massive protests that erupted over the hike in gas prices in November. Moscow even suggested “foreign forces” might have been involved in igniting the revolts, noting that the gas price hike was only one contributing factor.

While Moscow might be rather pessimistic about the nuclear deal's viability, it supports Iran’s decision to stop complying with some JCPOA restrictions, with a view toward saving the deal rather than undermining it. In early December, Ryabkov called on the remaining parties to the deal not to launch dispute resolution mechanisms. He said the main aim now must be “standing up to the destructive behavior of the United States, which is aimed at permanently exterminating the deal.”

Meanwhile, the European Instrument in Support of Trade Exchanges (INSTEX), developed in January to bypass US sanctions against Iran, failed to deliver the benefits Tehran was expecting, and the United States declined to approve French President Emmanuel Macron’s initiative to provide Iran with a $15 billion credit line. In this situation, Russia can only render diplomatic and political backing, so the likelihood of rescuing the increasingly hollow JCPOA rests mostly on the specific narrative that blames the United States for withdrawing, and not on some tangible support for Iran.

On a more constructive note, Russia and Iran claim to be working to connect their national financial messaging systems to get around the Society for Worldwide Interbank Financial Telecommunications (SWIFT). Given that Iran has been formally connected to SWIFT only from 2016-2018 — after the JCPOA was inked — the effort to bypass the limitations of the all-embracing, US-controlled financial mechanism is understandable, especially as Russia also may be cut off from SWIFT as part of the coercive US sanctions policy.

Tehran is seeking as much as $5 billion from Russia for infrastructure projects, including construction of power plants and railways. Even though the amount the Russians may provide is less than the credit line proposed by France, and is considered mostly as infrastructural investment, Moscow may ultimately emerge as Tehran's rescuer now that Iran finds itself in possibly its worst condition since the beginning of the nuclear saga.

As for military relations, Rear Adm. Hossein Khanzadi, commander of the Iranian navy, confirmed that Russia and Iran, joined by China, will conduct a naval exercise Dec. 27. Pakistan was also invited to take part, but hasn’t confirmed its status. Russia and Iran agreed on this drill in September, at the height of Gulf tensions, when Saudi oil processing facilities in Abqaiq were attacked, with Iran immediately accused as a perpetrator.

On a bigger scale, Russian and Iranian leaders received an invitation to the KL Summit this week in Kuala Lumpur, Malaysia. Delegates from 52 predominantly Muslim nations are gathering there; Iranian rival Saudi Arabia was notably not invited.

The effort to bring Muslim nations together does not revolve around getting "justice” for Iran over the JCPOA, but rather the sense of galvanization of the “global south” (low- and middle-income countries in Africa, Asia, Latin America and the Caribbean) against the West, which is seen as imposing its will on the others. In this particular case, the Iranian issue is seen as one of the injustices on the summit agenda.

Against this backdrop, Iran enjoys political support among those in the Muslim establishment who long to restore global justice, and has Russia's and China’s backing on a number of issues. This is why, while there are not many practical means to rescue the Iranian government from the grip of crippling sanctions, Tehran will make an effort to maintain the proper political discourse on the matter with the help of fellow Muslim nations — including those outside the Middle East — and traditionally supportive Russia.

Given all this, the incident with Rosatom suspending its Fordow project will remain only a minor detail for Iran compared with the wide discourse being formed against the American effort to undermine the JCPOA. Russia is no doubt trying to play an active role in how those narratives are being laid out.