The Pentagon is sending mixed messages on whether the United States will deploy more troops to the Middle East to counter perceived threats from Iran. 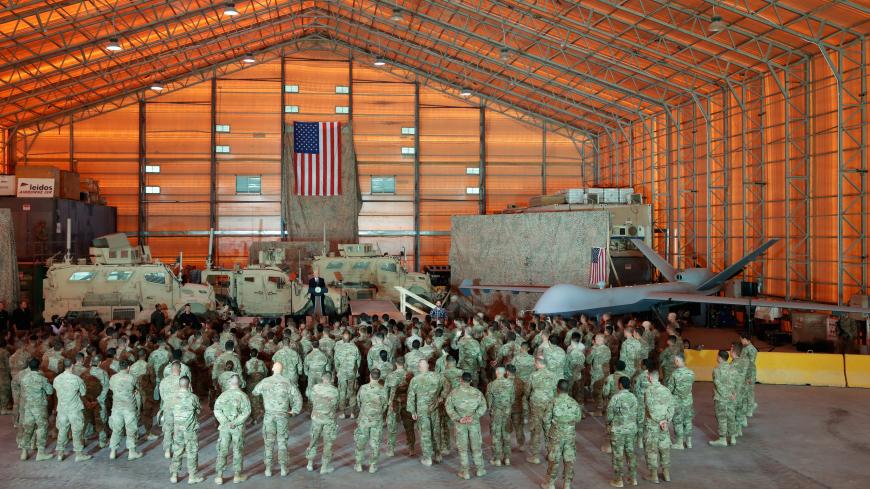 A drone and armored vehicles serve as a backdrop as US Vice President Mike Pence delivers remarks to US troops at al-Asad Air Base, Iraq, Nov. 23, 2019. - REUTERS/Jonathan Ernst

The United States is not considering sending 14,000 American troops to the Middle East, the Pentagon said in a statement today. But a spokesperson did not rule out deploying more forces to the region amid reports of increased threats from Iran after lawmakers grilled the Defense Department’s top policy official earlier in the day.

The denial from the Pentagon marks the third time the agency has sought to refute a Wall Street Journal report indicating that the United States was considering doubling the number of troops sent to counter Iran’s military activity. The news came after the US Navy seized a cache of missiles allegedly made by Iran and bound for Yemen by sea earlier this week. The New York Times reported that Tehran had shifted short-range missiles into Iraq.

“We adjust our force posture and troop levels based on adversary action and the dynamic security situation,” Pentagon press secretary Alyssa Farah said in a statement Thursday afternoon. “Secretary [Mark] Esper spoke to Chairman [Jim] Inhofe this morning and reaffirmed that we are not considering sending 14,000 additional troops to the Middle East at this time.”

Under pressure from senators in a hearing on Thursday, John Rood, undersecretary of defense for policy, appeared to confirm the United States was considering adding troops after calling the story “erroneous.” Freshman Sen. Josh Hawley, R-Mo., asked Esper to provide immediate clarification on the Pentagon’s plans during the Armed Services Committee hearing.

In May, the Trump administration ended all waivers to US sanctions against Iranian oil purchasers. Since then, the Pentagon has steadily ramped up military pressure in the region, although the agency’s guiding 2018 strategy document calls on the United States to focus on China and Russia.

The Pentagon sent a carrier strike group and 1,500 troops to the Middle East after blaming Iran for loading missiles onto ships and for using limpet mines to attack four commercial ships in May. Several hundred American forces returned to Saudi Arabia in July after more tanker attacks and the downing of a US surveillance drone.

Suspected Iranian cruise missile attacks and drone strikes on a major Saudi refinery at Abqaiq in September led the United States to deploy an additional 200 troops to support a Patriot battery, with Esper announcing the extension or deployment of 3,000 forces in the country in October as the agency also sent three more air defense batteries and two F-15 squadrons.

CNN reported on Thursday afternoon that the US administration is most likely to send another 4,000 to 7,000 troops to the Middle East.

But after Trump has twice waved off possible American military strikes in response to alleged Iranian provocations, the United States moved instead on Thursday to apply diplomatic and economic pressure against Tehran over the missile shipment and violence against anti-government protests that have killed 208, according to the rights group Amnesty International.

Brian Hook, the State Department's special representative for Iran, said today that the agency would apply sanctions against two major prisons holding the demonstrators, and would offer a $15 million reward for information on the Yemen-based commander of the Islamic Revolutionary Guard Corps. Hook also released photographs of the seized Iranian weapons in a press briefing, adding to a tableau of alleged Tehran-origin weapons from Yemen unveiled at a US military base two years ago.