The Pentagon is trying to put the finishing touches on a plan to use irregular warfare tactics to temper Iran’s military escalation in the Middle East, Al-Monitor has learned. 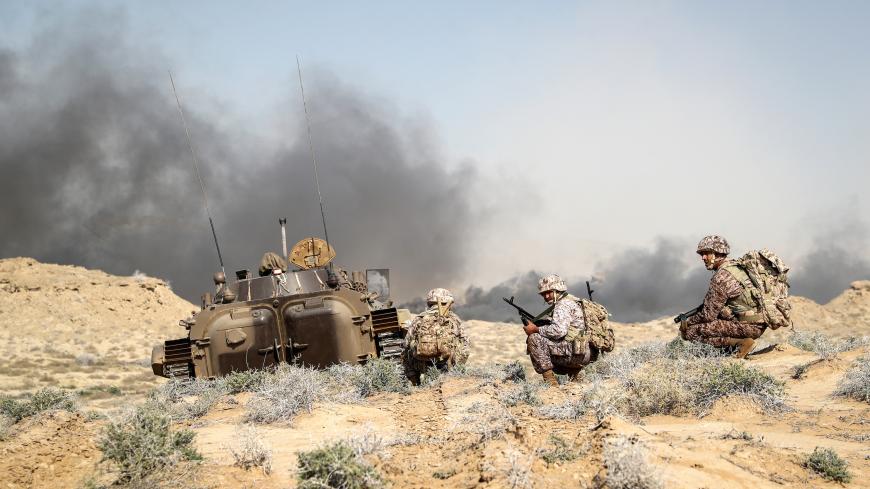 Military units of the Islamic Revolutionary Guard Corps are seen as they launched war games in the Gulf, Dec. 22, 2018. - Hamed Malekpour/Tasnim News Agency via REUTERS

The Pentagon is trying to put the finishing touches on a plan to use irregular warfare tactics to temper Iran’s military escalation in the Middle East, Al-Monitor has learned.

In a still-classified review ordered by former Defense Secretary Jim Mattis, the Pentagon is aiming to find new ways to counter Iran’s lower-cost military operations, such as the shooting down of a $100 million US surveillance drone over the Gulf in June.

“Iran utilizes, principally through the Islamic Revolutionary Guard Corps, Quds Force, an economy of force and capital model that prioritizes relatively low-cost operations,” said Mick Mulroy, the Pentagon’s top Middle East policy official. “We can do much more to combat this strategy by calibrating our responses and levying a counter-cost imposition strategy against Iran, whose pockets are much shallower than ours.”

In particular, Defense officials worry that Iran has tried to take actions that defy US response through nonstate military units below the level of outright warfare, such as IRGC proxies attaching limpet mines to Norwegian and Emirati ships in May, to avoid detection.

The Donald Trump administration has opted not to respond militarily to Iran’s actions over the summer, which some fear could allow Tehran to take on increasingly bold efforts to counter the United States.

The new strategy would “involve economizing our force allocation and operations to deny Iran strategic success,” Mulroy said. That could indicate that the Pentagon might seek to utilize cyberattacks and electronic warfare to target Tehran’s financial systems and computer networks, experts told Al-Monitor.

“A lot of this comes out of the fact that max pressure is not working,” said Becca Wasser, a senior policy analyst at the RAND Corporation. “There seems to be almost a gut reaction when an adversary responds in an asymmetric way. The US response might also need to be asymmetric in nature.”

But the so-called Irregular Warfare Annex to the National Defense Strategy would be a potential shift from the Pentagon’s response to Iranian provocations that have flared up since the Trump administration threatened to sanction nations who did not slash oil purchases from Tehran by May.

Since then, the Trump administration has mostly deployed conventional US units to Saudi Arabia. Defense Secretary Mark Esper announced on Friday that the United States planned to deploy or extend the tours of 3,000 US troops to Saudi Arabia after Iran allegedly attacked an oil field last month.

Chief Pentagon spokesman Jonathan Hoffman said two F-15 fighter squadrons and an air expeditionary wing would be sent to the region, along with two Patriot batteries and a Lockheed Martin-made Terminal High Altitude Area Defense system, which offers wider coverage than the latter system that already guards the Abqaiq oil fields, the site of September’s attacks attributed to Iran.

On Thursday, Raytheon won a $384 million deal from the US Army to build a new 360-degree radar that will help the Patriot batteries intercept drone swarms and cruise missiles, which were used to target the Abqaiq facility.

But the Pentagon, which opposed the initial decision to exit the 2015 Iran nuclear deal and fought back against declaring the IRGC a terror group, has also reportedly used secret digital strikes to take aim at Iran’s supposed “propaganda” capabilities and spy groups, to challenge Iran below the level of armed conflict.

In recent weeks, the United States has increasingly turned to Gulf partners to forge military and diplomatic ties to deal with the Iran threat. This week, State Department Undersecretary for Political Affairs David Hale, the agency’s No. 3 official, traveled to the region to meet with Saudi and Emirati leaders.