The Donald Trump administration will deploy a fresh detachment of US troops to Saudi Arabia after blaming Iran for an attack against a major oil production facility just days ago. 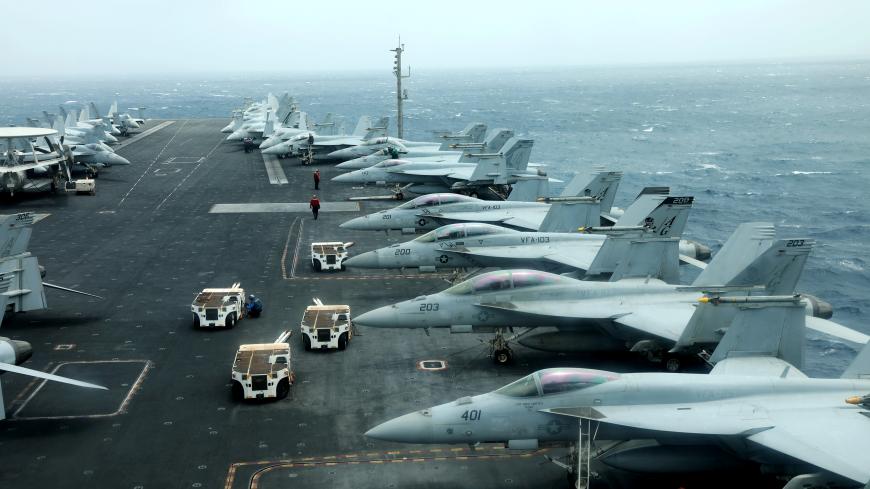 F/A-18F aircraft are seen on the deck of the USS Abraham Lincoln in the Gulf of Oman near the Strait of Hormuz, July 15, 2019. - REUTERS/Ahmed Jadallah

The Donald Trump administration will deploy a small detachment of US troops and more missile defense batteries in Saudi Arabia, Defense Secretary Mark Esper said on Friday, just days after the United States blamed Iran for attacks that devastated a key facility in the oil-producing nation.

Esper and Chairman of the Joint Chiefs of Staff Gen. Joseph Dunford characterized the move, which includes provisions of defense equipment, as “defensive in nature.” The decision came after Trump’s National Security Council huddled late Friday afternoon to discuss a range of US military options to respond to the alleged Iranian attack.

While adding onto 2,000 US troops sent to the Middle East since June, the decision — announced alongside fresh sanctions on Iran’s central bank Friday — marks another move by the Trump administration to respond to a suspected Iranian provocation below the level of a military strike.

The new deployment will be less than 1,000 troops, Dunford stated at Friday’s briefing, as Pentagon officials called on American allies to help reinforce Saudi defenses, which experts said had been oriented in the wrong direction to respond to the attacks last weekend and may not have been prepared to shoot down drones and cruise missiles without adequate early warning systems.

“Regardless of where you think it came from, the fact is, the Saudis were attacked by both drones and cruise missiles and are still vulnerable to attack,” Esper told reporters. “So asking allies and partners to contribute resources to help them defend themselves and to defend those things I spoke about, I don't think is too much of an ask, given the situation.”

Yet even after the Trump administration fingered Iran for mine attacks on Emirati and Norwegian-flagged ships in May and a shootdown of an American surveillance drone in June, the Pentagon has been slow to get skeptical allies to commit military assets to the region, including European nations that have sought to preserve the 2015 Iran nuclear deal.

Several European countries, including the Netherlands, are still looking at contributing frigates and naval assets to defend freedom of navigation in the Gulf after the United States fingered Iran for a series of tanker attacks in the Strait of Hormuz this summer, a European official told Al-Monitor on condition of anonymity. But the assets would be working with a European coalition, not the United States, to avoid the perception that European Union nations are building an alliance directly against Iran.

The official said European nations, which have resisted joining the US-led pressure campaign, will wait for a UN-backed consensus at next week’s General Assembly before making a decision about how to respond to the attacks on the Aramco facility at Abqaiq, which knocked out 50% of Saudi Arabia’s oil supply last week.

Former US officials insisted that the new deployments, which follow the arrival of the USS Abraham Lincoln carrier strike group in the Gulf earlier this summer, will not force the Trump administration to pivot away from its strategy to focus on Russia and China.

“The NDS Commission report made the point that ‘taking risk’ in the Middle East to find resources to put against the Russia or China challenges was probably ill considered and put you at the mercy of events,” Eric Edelman, a former undersecretary of defense for policy during the George W. Bush administration, told Al-Monitor, referring to a commission of experts created to evaluate Trump’s new defense strategy. “That said, these deployments are relatively small and do not really change the balance of effort very much in the long run.”