Jordanian-Israeli relations have grown increasingly tense as Jordan tries an Israeli accused to illegally crossing the border and holds a military exercise simulating an Israeli invasion. 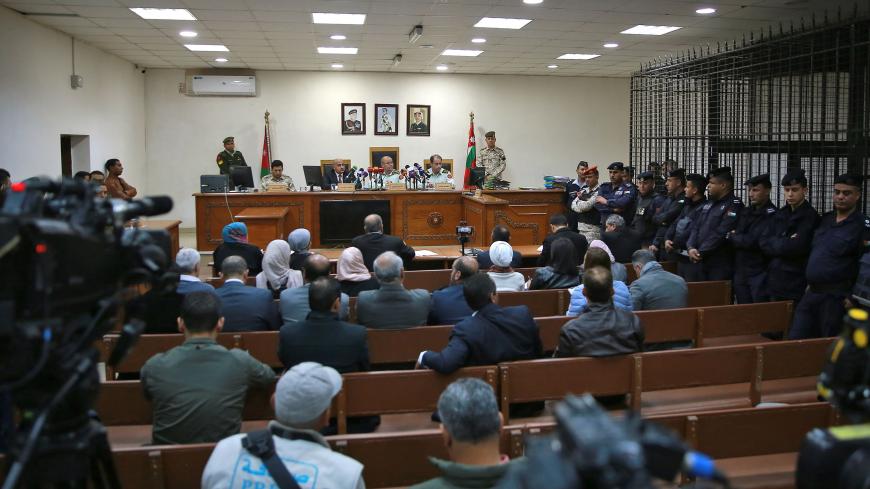 Israeli Konstantin Kotov stands in the defendant's cage next to a translator (R) during his trial in Amman, Jordan, Dec. 2, 2019. - AHMAD ABDO/AFP via Getty Images

It was not the first time Israelis have crossed the border to Jordan or vice versa. Those caught are usually handed back to their country of origin by tacit agreement. Last July, Israel delivered a Jordanian citizen who had crossed into Jordan by mistake. In January, Jordan handed back an Israeli citizen who entered the city of Aqaba by boat from Eilat.

Kotov’s trial comes in the context of high tensions between Jordan and Israel, with Israeli Prime Minister Benjamin Netanyahu expressing his intention to annex the Jordan Valley and repeated Israeli violations of Jordanian sovereignty over holy sites including incursions into Al-Aqsa Mosque, settlement expansion and the administrative detention of Jordanian citizens in Israel.

The Jordanian army held military exercises simulating an Israeli invasion Nov. 25. The drill was dubbed “Swords of Karama” after the battle near Karama village that Israel lost to the Jordanian army and Palestinian factions in 1968. The exercise was attended by King Abdullah and security leaders and members of parliament.

On Nov. 10, Jordan recovered from Israel the Baqoura lands in the Jordan Valley by refusing to renew a 25-year lease under a peace agreement between the two countries. A day later, Abdullah publicly prayed in his military uniform.

Jordan's king shared his view on Jordan's relations with Israel in a Nov. 23 interview with Robert Satloff, the executive director of the Washington Institute for Near East Policy: They “are at their lowest levels ever,” he said.

According to analysts who spoke to Al-Monitor, the source of the tension lies far beyond the borders of the Middle East. It has to do with the US administration proposing its "deal of the century," which favors Israel at the expense of the peace process it purports to further. Jordan sees the two-state solution as a fair solution consistent with its interests.

Researcher Abdullah Sawalha, the founder and director of the Center for Israel Studies in Amman, told Al-Monitor, “Legitimizing settlements and moving to annex the Jordan Valley is not an Israeli decision, it is an American decision. Israel cannot take this step without US approval. Therefore, it is with the US that Jordan has a problem.”

He added, “Jordan does not have a strategy to deal with the right-wing US-Israeli alliance. Also, Jordan's position contradicts that of the Palestinian Authority, which is boycotting the US administration. Jordan believes that there is no solution to the Palestinian cause without America. Yet, Jordan must take a clear stance on the right-wing coalition, open a dialogue with Israel and put all the controversial issues on the table.”

The Israeli-Jordanian tension has not prevented either side from continuing with major economic projects. Israel is expected to start exporting gas to Jordan according to an agreement between the two parties in early 2020 despite popular opposition.

Sawalha said, “Jordan deals with Israel based on political and economic issues. It is at odds with Israel regarding the Palestinian cause but is moving forward with bilateral economic projects.”

Israel and Jordan are contemplating establishing a free economic zone to transport goods to the Persian Gulf, an unnamed government official told the local Ammon news site in May.

Former Minister of State for Media Affairs Samih al-Maaitah believes the unprecedented support by the US administration for Israel has encouraged Netanyahu to maintain his policy of aggression against Jordan and Palestine in issues affecting Jordanian national security. He told Al-Monitor, “This explains Netanyahu’s intention to annex the Jordan Valley, kill the possibility of establishing a Palestinian state and promote scenarios of federalism with Jordan and the alternative homeland for the Palestinians.”

Maaitah explained, “Jordan is now approaching Israel and its transgressions firmly, as an equal state.”

Jordan has a strong relationship with members of the US Congress, but not with the administration. Abdullah has met President Donald Trump only once because of his position toward Israel.

House Speaker Nancy Pelosi and other senior members of Congress visited Jordan on Oct. 19 and held talks with the king, who reaffirmed his position on the two-state solution.

For Ahmad al-Raqab, rapporteur of the Jordanian Parliament's Palestine Committee, the shape of the relationship between Israel and Jordan is determined by pragmatism in addition to “US bullying.”

He told Al-Monitor, “The proposed outcomes of the 'deal of the century' involve severe injustice to Jordan and violation of its red lines, such as Jordanian sovereignty over the holy sites and Israel’s annexation of the Palestinian territories with US support. This is in addition to the issue of the return of refugees. Jordan is affected negatively by this deal, so it only natural that this take a toll on the relationship with Israel and the US.”

A quarter of a century after the signature of the peace agreement between Jordan and Israel on Oct. 26, 1994, their relationship remains lukewarm amid popular and parliamentary demands pressuring the Jordanian regime to end it.

Until changes in the US administration come, Jordan is courting the European Union to condemn Israel’s violations and face the US bias toward Israel.