Prime Minister Benjamin Netanyahu is still pushing for a rotation agreement and insisting that his relationship with US President Donald Trump offers Israel important security opportunities. 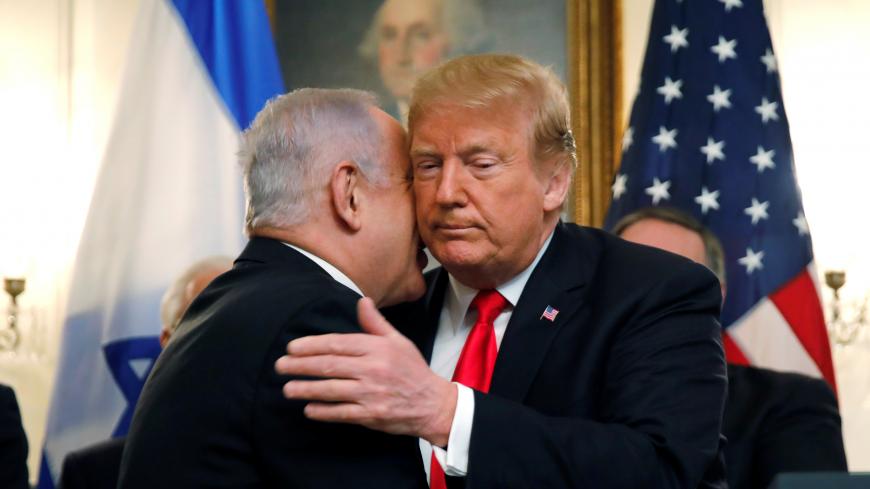 “This is a historic opportunity,” whispered one of Prime Minister Benjamin Netanyahu’s insiders to Al-Monitor this week. “You have no idea what we can wheedle from the Americans now, what a golden opportunity we face when the US is about to enter an election year — if we have a unity government headed by [Prime Minister Benjamin] Netanyahu.” I asked my source, who asked for anonymity, for an example. Something of strategic importance that we could get from the Americans now, but not at any other time. Except for a defense treaty, of course. “Bunker busters,” he answered.

Netanyahu is desperate to convince his political rivals to allow him to remain a few more months in power, and he will do anything to accomplish it. His people dangle promises of toys and strategic achievements like the Spaniards used to give beads to the Native Americans. The source’s bunker-buster bomb is the cherry on top. It refers to the recent American development of giant bombs in this category — bombs that have not yet been provided to Israel despite its repeated pleas. According to members of Netanyahu’s inner circle, these bombs will be given to Israel once it signs the mutual defense agreement that Netanyahu has been working on.

The fact is that Israel's security and military heads have always opposed a full defense pact between Israel and the United States. But this little fact does not bother Netanyahu’s people, who continue to assert that only he is capable of the hitching the American administration to Israel’s security wagon. When they encounter criticism such as the opinion of Blue and White leader Benny Gantz, who explained Dec. 2 that such a defense pact does not serve Israeli interests, Netanyahu’s associates explain that they are referring to a “partial” defense pact focused on Iran alone.

To this we must add another level of fear-mongering: Netanyahu’s people headed by Energy Minister Yuval Steinitz clearly state that a widespread war is likely to erupt in the next six months between Iran and its adversaries in the region, including Israel. In such a war, they dramatically proclaim, it’s best that Netanyahu be at the helm. However, let us recall that it is the new and controversial Defense Minister Naftali Bennett who has been ramping up the warmongering recently. Bennett, who was appointed by Netanyahu on Nov. 10 to everyone’s surprise, threatens Iran on an almost daily basis. “Perhaps Netanyahu simply needs a war with Iran in order to survive politically,” one of the Blue and White heads told Al-Monitor on condition of anonymity. “That is scary and dangerous; maybe it’s a lesson that the earlier we get our hands on the reins of government, the better.”

In less than a week, the 21 days Israel’s Knesset had to cobble together a government will expire. The country may find itself in its third election cycle of the year. Until Dec. 11, Netanyahu and Gantz could in theory form a unity government. The compromise proposed by President Reuven Rivlin says that once formally indicted, Netanyahu would hand over his responsibilities to Gantz. Netanyahu now says that he’ll take a rotation agreement if he serves for the first six months.

The big mystery is: Why does Netanyahu continue to insist on being the first in a rotation agreement with Gantz when he’ll have only half a year? By contrast, Blue and White’s offer to Netanyahu sounds much more reasonable: Since Netanyahu is embroiled in an indictment, let Gantz be first in the rotation, giving Netanyahu two years to resolve his legal issues. But Netanyahu won’t hear of this option. He insisted on the first year, then went down to eight months, and now half a year. Why?

This week, Netanyahu’s associates began to reveal what they call the real reasons for Netanyahu’s stubbornness. According to Blue and White, they are just another of Netanyahu’s spin attempts to shape public opinion and divert attention from the truth. Netanyahu’s associates insist that the prime minister wants to make history in the half year remaining to him by saying yes to President Donald Trump’s peace initiative, which will finally be unfurled. Then he will wait for the Palestinian no and immediately annex the Jordan Valley. He’ll also make a historic defense pact with the United States. As part of that treaty, the Americans will erect a strategic weapon in Israel that Israel has never secured in the past — such as “bunker buster” bombs. Only then will Netanyahu find peace of mind: His place in history will be secured and he will begin his efforts to erase the fact that he is the first prime minister to be served with a bill of indictment.

Tremendous pressure is being applied to Blue and White as the party faces a dilemma. Netanyahu is deftly manipulating the Israeli public as only he can do while everyone wonders why he stubbornly insists on another half a year. Is there a typical Netanyahu plot behind all the gifts and strategic alliances that will enable him to remain prime minister while humiliating Blue and White’s clueless leaders?

“Why did he wait until now to advance the annexation of the Jordan Valley?” asked one of Blue and White leaders in a conversation with Al-Monitor this week, on condition of anonymity. “He knows that this defense treaty would be merely a façade, empty of meaning. He is now trying to do hocus pocus in order to remain in power for another few minutes. Only he actually knows the real reason behind all this.”