Fed up with Iraqi authorities' lack of response so far, some activists are considering an international case against former Iraqi Prime Minister Adel Abdul Mahdi and others for their alleged roles in killing Iraqi demonstrators. 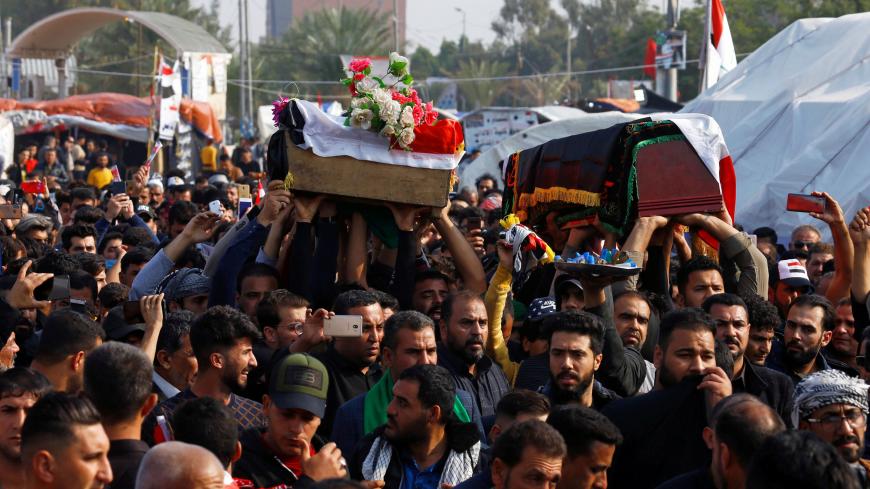 Mourners carry the coffin during the funeral of a demonstrator who was killed at an anti-government protest overnight in Najaf, Iraq, Nov. 30, 2019. - REUTERS/Alaa al-Marjani

In a joint statement after a meeting on Dec. 7, between Iraqi caretaker prime minister Adel Abdul Mahdi and the ambassadors of Britain, France, and Germany, the European ambassadors condemned the "the terrible crime" against Iraqi demonstrators, urging Abdul Mahdi to "arrest the perpetrators and bring them to trial as well as working accurately in order to these types of crimes must never again be allowed to occur".

However, as the government fails in taking action against the perpetrators, calls for international prosecution rises significantly.

Former Iraqi Prime Minister Ayad Allawi and others are threatening to seek international prosecution against officials they believe are responsible for the deaths of hundreds of protesters unless the Iraqi government takes action.

Allawi’s threats come after more than 400 protesters were killed in less than two months and about 16,000 were wounded. Since Oct. 12, the Iraqi Bar Association has received complaints from individuals who say they have been abused during the protests and are seeking to file suit against Iraqi security forces.

Al-Monitor obtained information from sources in Geneva affiliated with the Gulf Center for Human Rights and the Iraqi Observatory for Human Rights, who said the groups will press to internationalize the issue and hold the killers accountable. The sources asked to remain anonymous, but they said that if necessary these organizations will file suit against recently resigned Iraqi Prime Minister Adel Abdul Mahdi, who was head of the armed forces; Defense Minister Najah Hassan Ali al-Shammari; and Interior Minister Yassin al-Yasiri, who is the main person responsible for internal security.

A new government is one of the protesters' goals. They are demonstrating against severe unemployment, poor public services, corruption and Iran's growing influence.

This is the first time activists and human rights defenders in Iraq have moved to find lobbies and international alliances to hold accountable the killers of protesters. Their efforts come after a government report failed to identify perpetrators or hold them accountable. It said, in fact, that officers simply lost control of their forces and "there were no orders from the top" to use live ammunition.

One of the human rights sources told Al-Monitor, “If the Iraqi judiciary doesn't deal professionally with the issue and takes no serious or real action … we will be filing lawsuits against these [officials] in European courts.”

This lines up with a report published Nov. 3 by some Iraqi media outlets that said, “A human rights team is seeking to file a lawsuit against the [Abdul Mahdi] and several security officials for murdering and carrying out a genocide against peaceful demonstrators on the Al-Joumhouriya and Al-Sanak bridges and in Tahrir Square, among other protest sites, using live bullets and tear gas.”

Moath al-Momani, a legal expert at Lawyers Without Borders, told Al-Monitor a UN resolution will be needed for international prosecution because Iraq is not a party to the International Criminal Court (ICC) Rome Statute of 1998. Iraq didn't vote on the draft UN resolution at the time because then-President Saddam Hussein feared international trials. The current political regime also fears such trials.

“Unfortunately, Iraq is not a member of the Rome Statute, so it might not be able to achieve justice when it comes to the prerogatives of the ICC prosecutor,” Belkis Wille, a senior Iraq researcher in the Middle East and North Africa division at Human Rights Watch, told Al-Monitor.

“Iraqi activists can petition the UN Human Rights Council in Iraq to hold a special session on the situation in Iraq and maybe prompt the [council] to establish some kind of investigative mechanism for violations in Iraq. This would be the best way for Iraqis to draw the international community’s attention to the government’s behavior,” she added.

The United Nations, the European Union and the United States have all condemned the Iraqi government’s ongoing killing of protesters. This doesn't bode well for Abdul Mahdi and members of his government.

Abdul Mahdi is a French citizen, which could facilitate an international trial, according to the human rights sources. If an accused person is a national of an ICC member state, and that state sees fit, a trial can be held. In other words, France could be pressured to try Abdul Mahdi.

This would take time and effort, but it is possible. Stockholm prosecutors, for instance, already are investigating Shammari, who holds dual citizenship in Iraq and Sweden, for possible crimes against humanity.

Those seeking international prosecutions can also find lobbies capable of pressuring the UN Security Council into referring the killers to the ICC. The Darfur atrocities case was referred to the ICC in March 2005, which prompted the ICC to indict former Sudanese President Omar al-Bashir. That case remains on hold, however, as Bashir must be present to be tried, and he is currently imprisoned and possibly facing the death penalty in Sudan.

The efforts to hold at least some of the killers responsible will take some time but are likely to come to fruition. In addition to the institutional organized action carried out by human rights and civil society activists, members of the Iraqi diaspora in Europe are working to prosecute Iraqi officials responsible for the violence against protesters.

“The international community and international human rights institutions seem to be the only way for Iraqis to conduct a fair investigation and prosecute the perpetrators of these crimes,” Zahra Ali, an assistant professor at Rutgers University in New York, told Al-Monitor.