The Iraqi parliament voted on a new electoral commission that will consist of independent judges. 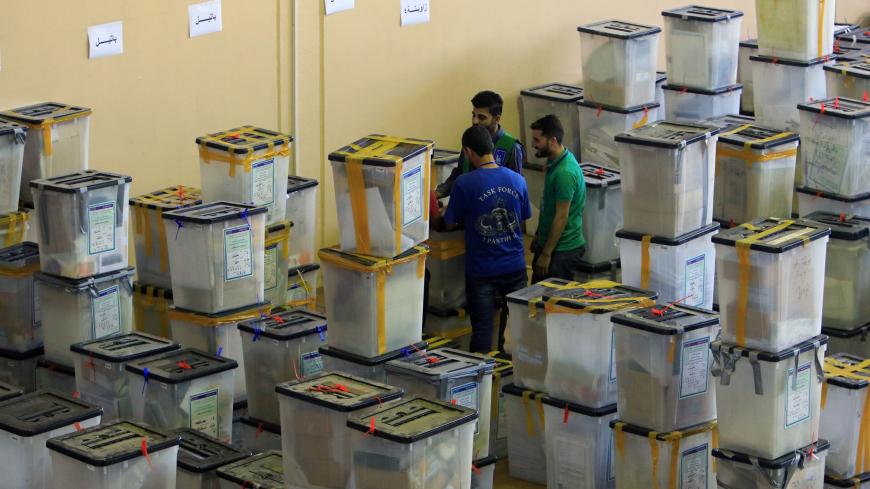 Employees of the Iraqi Independent High Electoral Commission inspect ballot boxes at a warehouse in Dohuk, Iraq, May 16, 2018. - REUTERS/Ari Jalal

BAGHDAD — Amid preparations for early elections in Iraq, the parliamentary blocs are trying to meet the demands of the popular protests that began over two months ago. Protesters have demanded a new political system, but Iraqi politicians have not been able to find adequate solutions.

Parliament approved a new law related to the Independent High Electoral Commission (IHEC) Dec. 5, yet popular and official criticism of the law continues. The law states that “IHEC members shall be seven experienced judges who will be chosen by a draw to ensure transparency.”

However, granting the judiciary in the Kurdistan Regional Government (KRG) the right to nominate two judges raised the ire of many protesters and some political parties. They perceived this as an attempt to evade their calls for an end to the sectarian and national quota in the country. Also, the method by which a draw may be conducted is still unresolved. Fears remain that some influential parties might tamper with the IHEC and interfere with the nomination process.

Kurdish parties opposed the draw method before a quota was set for the Kurdish judges. The Kurdistan Democratic Party deputy, Hoshyar Zebari, said, “The best solution was to assign the United Nations Assistance Mission for Iraq the task of fully supervising the elections, due to the major differences over forming the IHEC at a time when protesters reject any decision taken by the Iraqi parliament.”

On Dec. 15, the Supreme Judicial Council of Iraq expressed reservations on the inclusion of judges on the IHEC due to their participation in “executive actions.” The council insisted that their role be limited to “looking into appeals and complaints,” which are submitted by participants in the electoral process.

The Council of Ministers is planning to nominate a number of advisers to the Supreme Judicial Court. The council will choose two of them and the rest will be selected from nominees suggested by presidents of the Courts of Appeal in all provinces. Then, five of the nominees will be selected for the electoral commission via draw.

Parliamentarian Yonadam Kanna, the secretary-general of the Assyrian Democratic Movement, told Al-Monitor, “Selecting judges to supervise the elections is the best possible option at this stage to get rid of quotas and party influence in the IHEC since their selection will be made by the higher judicial authorities based on a draw.”

He noted, “Some blocs were willing to include technocrats in the IHEC and experts who previously worked in this regard, but they ended up not opting for that option since they found it difficult to come up with a method to select them.”

Kanna further stressed that the UN’s role will be significant in monitoring the formation of the new IHEC and supervising the elections.

According to Hussein al-Aqabi, a member of the parliamentary legal committee, many blocs had reservations over the IHEC law, but its formation may help guarantee its impartiality and integrity without sidestepping the provisions of the law.

The new IHEC law is not entirely new. Like previous iterations of the law, the new law also allows for the establishment of an excess of departments, such as administrative, legal, operations, media and financial, each with its own employees and manager in every province. This much criticized structure greatly increases the IHEC budget.

Article 18 of the IHEC law stipulates that the board will deliberate the appeals submitted by the electoral lists and the candidates in the event of an electoral violation, which allows the IHEC to judge the complaints against itself, not a third neutral party.

Forming the new IHEC might be hindered, or innovative ways might be used to keep the quota system alive, as some political blocs and parties fear that the new laws and the overwhelming popular anger will affect the entire political system, its governmental and legislative positions, and cost them their influence and interests.

Perhaps the task of forming the IHEC will be more complicated than it appears. Former IHEC head Faraj al-Haidari noted in an article about the new law that the parliament’s decision to dissolve the IHEC and form a completely new commission would make the holding of early elections "impossible."

“The board, be it formed by judges or others, has a duty to set instructions for the constituency to update records, certify candidates and update the voter register, among other tasks during the electoral process," Haidari wrote. "As for those who embody these decisions and instructions and conduct elections, it is these elites of the professional cadre who were wrongly dismissed by parliament, including employees who have nothing to do with the elections, such as staff working in services, maintenance, transportation, finance …”