As Iraq wraps up election recount, is a new government in sight?

In the midst of intensive negotiations by the winning parties in the elections to form a new government, the Independent High Electoral Commission has completed the process of manual counting, without expecting a significant change in the results. 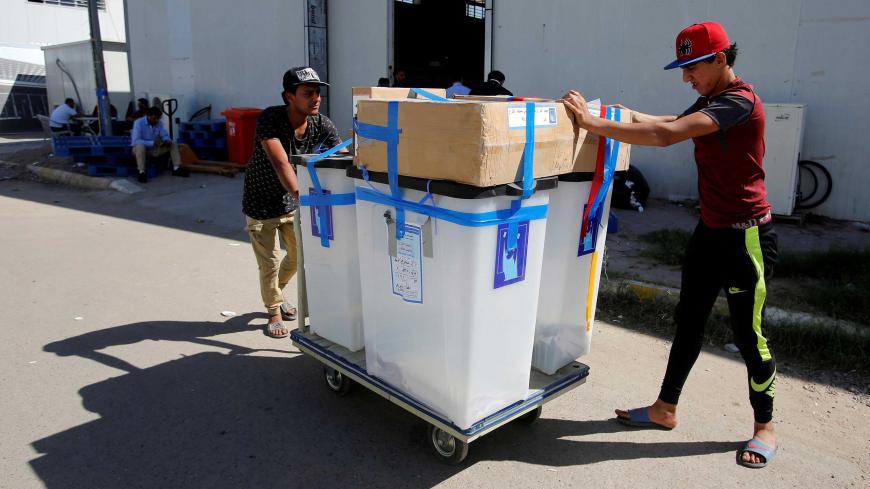 Iraq’s Independent High Electoral Commission (IHEC) finished the manual recounting of votes on Aug. 6 amid an outcry over potential fraud that involved ballots in Anbar province and Baghdad and Kirkuk cities, as well as districts in the Iraqi Kurdistan region and all ballots allotted for Iraqis who live abroad. The IHEC decided to cancel the recount process for the al-Rusafa district in Baghdad, as the ballots and machines used to submit and count votes were damaged in a fire following the election.

Laith Jabr Hamza, the official spokesman for the IHEC, addressed the decision to cancel the recount in this area, saying that the commission, which consists of select judges, came to the decision after “reading the record for the count proceedings by the judge who was instituted to oversee the IHEC in al-Rusafa. This took place after the fire that razed the depositories [on June 10].” The decision was made due to the fact that all recording and biometric verification devices, as well as the ballots, were completely devastated in the fire, which rendered a manual recount impossible.

The Iraqi parliament asked for a manual recount back in June in light of a report by the Iraqi government that revealed a number of violations during the elections. This was followed by the dismissal of the former commissioners who were replaced by nine judges to chair the IHEC according to a decision by Iraq’s Judicial Council. The nine judges were tasked with overseeing the manual recount.

Of note, Reuters published a report Aug. 5 that contained documents revealing that the Federal Board of Supreme Audit expressed concerns over the machines used in the elections to the IHEC on May 9, three days before the scheduled elections. However, the commission disregarded those concerns where accusations revolve now around alleged tampering with the machines, which were imported by IHEC from the South Korea-based Miru Systems.

While the IHEC has yet to announce the result of the manual recount in full detail or say if it will have an impact on the candidates who won, speculations signal that this process won’t have a tangible impact on the winners or the distribution of seats, as some areas have announced that results and the recount were found to be consistent in Anbar, Dahuk and Iraqi Kurdistan’s Sulaimaniyah.

As such, the winning parties haven’t suspended their talks on forming the new government, nor have they withdrew their candidates from consideration for major positions, as they don’t expect an impactful change in the aftermath of the manual recount with respect to the formation of the new government.

Right now, there are three major names that are being primarily considered for major positions in the new government.

The Victory Alliance asserted in an Aug. 6 meeting that they will stick “with the alliance’s candidate Haider al-Abadi to head the new government.” “The Victory Alliance is above sectarianism,” the party stressed. “The benefit of Iraq and all of its components is always considered during our talks.” On the other hand, the Shiite parties have yet to officially select someone for the post of prime minister, which is allotted to them.

As for the presidency, Mohammad Saber Ismail was officially nominated by the Patriotic Union of Kurdistan (PUK) — a position that has been traditionally in the Kurds’ hands. Ismail, whose wife is former President Jalal Talabani’s sister-in-law, served as Iraq’s ambassador to the UN from 2013 to 2016. Ismail will take the presidency provided he gets two-thirds of the parliament’s votes. This, ultimately, hinges on the internal talks between the Kurdistan parties, as well as their talks with the other parties from the Shiite and Sunni spectrums.

Nonetheless, there have been disputes among Kurdistan’s parties — particularly the PUK and the Kurdistan Democratic Party — over Ismail’s candidacy. The Sunni entities, on the other hand, are eyeing this position for Sunni leader Khamis al-Khanjar, who is a supporter of the so-called Iraqi Decision Alliance — a feat that seems, however, unlikely due to the extreme Shiite reservations over Khanjar.

Yet speaker of the Iraqi parliament remains one of the more problematic positions, as Sunni groups, which have this position, are still deeply divided in light of disjointed visions and power struggles. Both Khaled al-Obeidi, the former minister of defense, and Osama al-Nujaifi, the former vice president of Iraq and a former president of the parliament, are hoping to seize the position, in addition to Salim al-Jabouri, who was the last speaker.

While it likely won't have a serious impact on the existing results, the official announcement of the outcome of the manual recount will accelerate the ongoing negotiations over forming the new government, especially now that the winning entities are submitting their candidates for the major positions in the new government.