Some Iraqi political parties are challenging the results of recent parliamentary elections, citing fraud and faulty electronic voting technology, but those who support the election results say a vote recount could lead to a civil war. 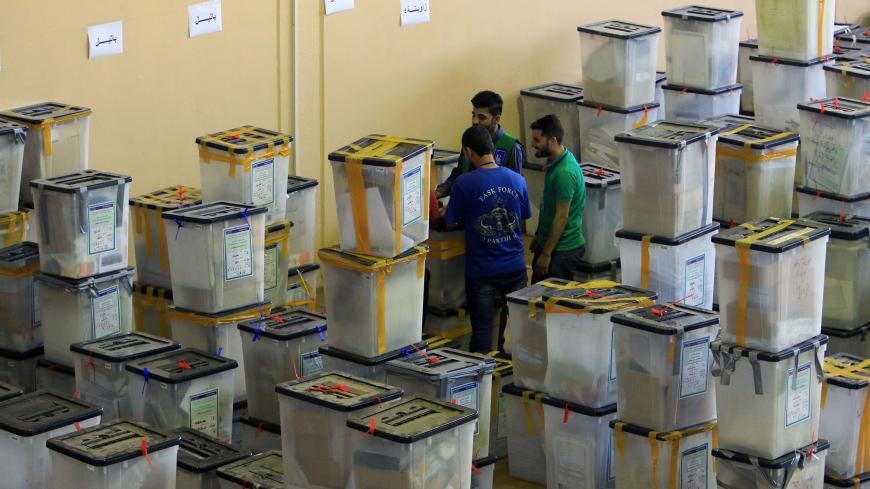 BAGHDAD — Iraqi member of parliament Jassim al-Bayati told the press that a number of parliamentary blocs want to put to a vote an amendment to Iraq's election law on June 4. The amendment would call for a manual recount of votes from the country's recent parliamentary elections — a move that could lead to the total or partial cancellation of election results. This comes after parliament voted May 28 to cancel the votes of Iraqi expatriates and institute a recount of 10% of the total number of votes.

However, Riyadh al-Badran, the head of the Independent High Electoral Commission (IHEC), believes that the total or partial cancellation of the election results could lead to a “civil war.” Badran said in a May 29 television interview that, based on the electoral law, which gives Iraqi expatriates the right to vote, the cancellation of votes from abroad “is not feasible.”

IHEC member Hazem al-Radini told Al-Monitor, “The majority of the winning lists in the elections are satisfied with the results and are seeking to form the largest bloc with their current alliances in order to form the next government.”

He said that the cancellation of election results is "unlikely and cannot be achieved,” yet such a decision on “the process of manual counting and sorting will depend on … the Federal [Supreme] Court.”

President Fuad Masum said in a May 30 statement that parliament’s decision “two days ago to cancel a part of the election results and manually recount and sort the votes is contrary to the constitution and the laws in force.”

Mohsen Saadoun, a member of the Iraqi parliament's legal committee, told Al-Monitor, “The powers of the parliament, as stipulated in Article 61 of the constitution, do not include the right to cancel the election results. Members of the losing blocs in parliament are taking unconstitutional steps that will only lead to chaos.”

He said that any decision to cancel the election results would have to be made by the judiciary, but that such a move would have grave implications for Iraq's future and could be a sign that "the country is headed toward the unknown and will not be able to organize elections until years from now.”

Meanwhile, the political parties and alliances calling for a recount, including Ayad Allawi's Al-Wataniya Alliance, believe that the IHEC failed to adequately manage the electoral process.

A statement issued by Al-Wataniya said, “Keeping the results of the elections as they are without taking into consideration any evidence, without adjudication as far as the electoral appeals are concerned and without taking the necessary decisions therein — especially after the United Nations confirmed the existence of fraud and manipulation of votes — will produce a distorted government and a parliament whose legitimacy is challenged.”

The Iraqi government announced May 24 the formation of a high-level commission to investigate allegations of fraud and manipulation in the election results.

The commission began its work on May 28, summoning senior IHEC officials and requesting information on voters abroad as well as the technical specifications of voting equipment.

At a press conference, Prime Minister Haider al-Abadi said that canceling a part of the results “will not ignite chaos.”

However, the blocs that did not win as many seats as they expected are pushing for a cancellation or at least a recount. They will likely exert pressure on the winning lists in a bid to achieve a better negotiating position in the talks to form a new government. In any case, the Federal Supreme Court will have the final say in determining whether parliament can cancel the election results.

However, the IHEC decided on May 30 to cancel the results of more than 1,000 polling stations inside and outside the country. The IHEC further announced the formation of commissions to hold employees accountable, in recognition of the failure and fraud that plagued the elections. The IHEC may also opt to follow the recommendations of the United Nations to manually recount and sort 10% of the total results to help legitimize the elections.

Overall, Iraqi voter turnout was incredibly low. The IHEC estimated that 44% of Iraqis voted in the elections. Many political parties and alliances, including Al-Wataniya, claimed the turnout was actually much lower, possibly less than 20%. They attribute skewed official numbers to fraud, the failure of electronic voting machines and the prevailing insecurity in the country.

Despite such grievances, the total or partial cancellation of the vote does not seem feasible in light of Iraq's sensitive security situation and growing concerns over a civil war.