Complaints about irregularities in Iraq's May 12 parliamentary elections, worries about the country's electronic vote counting and the agony of defeat have caused many parliamentarians to request that the results be canceled. 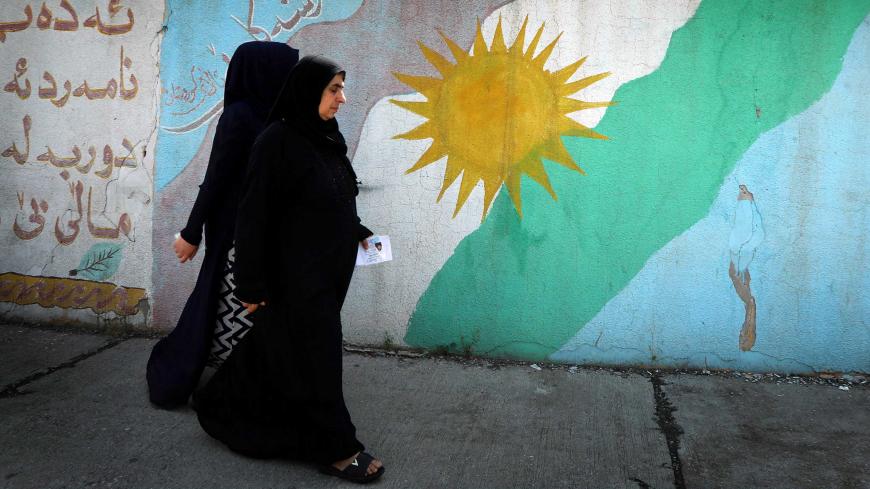 Women walk past a mural of a Kurdish flag outside a polling station during the parliamentary election in Erbil, Iraqi Kurdistan, May 12, 2018. - SAFIN HAMED/AFP/Getty Images

On May 21, a group of Iraqi parliament members submitted a request to the speaker to cancel the results of the May 12 parliamentary elections. The group also called for dissolving the Independent High Electoral Commission, discontinuing electronic voting and reinstating manual voting and sorting, with many legislators saying the elections were sabotaged.

The next day, six Kurdish parties of the Iraqi Kurdistan region threatened to boycott the political process if their demand to cancel the results in Iraqi Kurdistan and other contested areas is not met. However, the Patriotic Union of Kurdistan (PUK) and the Kurdistan Democratic Party (KDP), the two main political parties that came in first and second in the provinces of the region, did not join in on the complaints.

On May 18, the Independent High Electoral Commission announced the results of the elections. It also said that ballots cast in 103 polling stations in five provinces — Baghdad, Anbar, Salahuddin, Ninevah and Kirkuk — had been annulled because of sabotage and suspicions of fraud. However, the commission did not say whether the cancellation of those ballots actually changed the results.

Out of 329 members of the Iraqi parliament, 176 agreed on canceling the results of the elections, legislator Tawfiq al-Kaabi said. This would mean that the number of parliament members calling for the elections to be voided has reached the majority required for a law to be passed.

Legal analyst Ali Jaber told Al-Monitor, “The Iraqi parliament has the right to dissolve the current electoral commission and cancel the results of the election if it is proven to be sabotaged and fraudulent.”

Said al-Kakai, a member of the Independent High Electoral Commission, agreed with those calling for the cancellation of the results and the reinstatement of manual sorting. During a televised interview aired May 18, he said results that had been double checked in six provinces did not match with the original tallies, with the worst cases having differences ranging from 12% to 63%.

Former Prime Minister Ayad Allawi, the leader of the predominantly Sunni National Coalition, is also skeptical of the results, although his grouping won 21 seats. He is suspicious about the vote in refugee camps and abroad and called for the cancellation of those results. He also said he supports manual vote sorting in the contested provinces.

Parliament Speaker Salim al-Jubouri, who lost on May 12 despite being a top National Coalition candidate, said in a recorded message two days after the elections, “There is a conspiracy targeting me specifically. It appears to be part of a more elaborate plan. Yet most of its threads and tools have been revealed, and I will be disclosing all information to the public.”

Shiite parties were also skeptical of the results. Mohammad al-Sahyoud, a candidate from the State of Law Coalition, called “for canceling the results of the elections, extending [the term of] the parliament and announcing a caretaker government due to electoral fraud and sabotage” in a May 17 press statement.

Political analyst Ahmad al-Abiad told Al-Monitor, “The US supports the necessity of having manual sorting for 5% of ballot boxes. This might happen in the coming days.”

He added, “The suspicions around the results of the election are great and the calls for canceling them are even greater, but we do not have any constitutional procedure for canceling the results of elections. So the only solution available for political blocs is to pass a law in parliament canceling the elections before the constitutional end of their term June 30. The government can also appeal the parliament's decision to the Federal Supreme Court of Iraq.”

The State of Law coalition, which won 25 seats in parliament, was a big loser in the elections, seeing its total drop 66 seats from the 2014 elections. The lower number could jeopardize the coalition’s involvement in the next government.

Skepticism about the results emanated from political parties and groupings that received fewer seats than expected.

The Iraqi Turkmen Front in Kirkuk, led by member of parliament Arshad al-Salihi, objected to the election results in the province and asked its supporters to protest in the streets of Kirkuk. It also sued the Independent High Electoral Commission.

This is the first time since 2005 that election results have faced such strong objections. The complaints seem to be coming from all political parties except for the Sairoon Alliance.

The alliance led by the Shiite cleric Muqtada al-Sadr won 54 seats in the next parliament. It is the only coalition that did not doubt the results of the elections despite Sadr’s constant objections to the current electoral law.

While it is possible that a law canceling the results could be passed, such a step seems unattainable given the short deadline left for the parliament. The parliament members would first have to hold talks in order to reach a political agreement on the topic. This might lead the country into chaos, so an alternative quick solution that might please all political parties might be to manually sort the ballot boxes of some polling stations.