Despite the advantages offered by electronic counting and sorting devices in the Iraqi elections, fears remain that the results will be falsified. 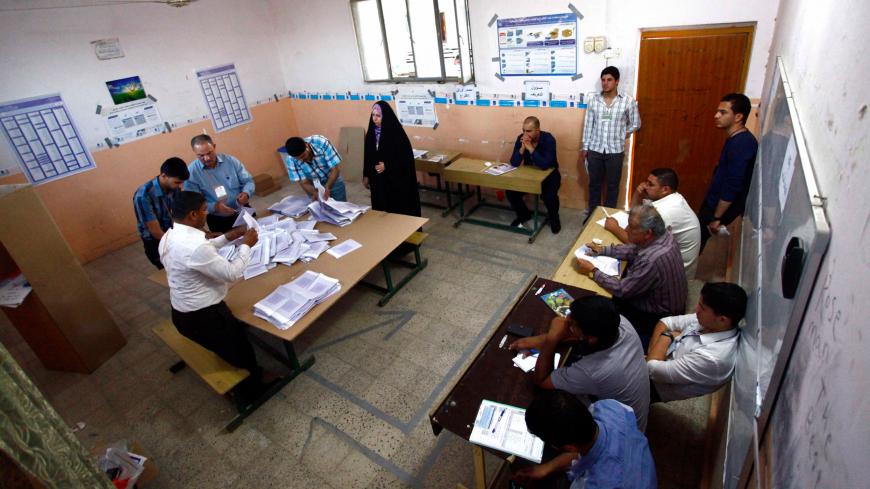 BAGHDAD — This year, for the first time, Iraq’s general elections will be conducted via a modern electronic system. The initiative is intended to reduce the possibility of fraud while expediting results in the May 12 elections, according to the Electoral Commission, which announced the completion of the new system April 9.

Yet the supposed advantages of electronic vote counting and sorting have not prevented some of those on the country’s electoral lists from expressing anxieties about the new scheme. It is feared that Iraq’s lack of experience, capacity and modernization when it comes to such a system might bring the results into doubt and under dispute, especially among losing parties or those with fewer seats in the new parliament.

In a meeting with Al-Monitor, the vice president of Iraq’s Electoral Commission, Rizkar Haji, discussed the details of the electronic system. He said, “This system was prepared by the previous commission [whose members were replaced in November], which contracted with the South Korean company Miru [Systems] to import equipment for the electronic counting, as well as 40 Korean experts to implement and maintain the devices.”

He said voters this year will “use a special [rubber] stamp instead of the customary pen to indicate their chosen candidate or list, and the devices will only read this stamp.” He said the electronic counting and sorting system is integrated into a box that receives ballots "and sorts them immediately.”

Haji said continuing technical training courses have been held to “prepare Iraqi cadres for working with modern Korean systems. Around 100 employees have been trained so far, with dozens more expected to be trained before the election.”

With regard to the possibility that the counting machines will malfunction, be misused or be subject to power outages, Haji said, “The devices are equipped with batteries to power them for 12 hours without electricity, while boxes at the 58,000 polling stations contain flash drives that record results immediately for backup, comparing them with the results from counting and sorting devices.”

He said the Electoral Commission is “wired to satellites that send results from each electoral center to the headquarters of the commission’s president in Baghdad, ensuring speed and enabling the announcement of results within hours.”

Haji said the electronic aspect will not be limited to vote counting and sorting. There will also be special hardware (imported from the Spanish company Nidra) that reads each voter’s card and records fingerprints to prevent the repetition of votes and to establish the actual number of voters.

The Electoral Commission did acknowledge that some pressure had been exerted by political parties to cancel the electronic count and return to manual counting and sorting. Although these entities were not named, the most prominent bloc adopting a stance against the electric method is the State of Law coalition led by Vice President Nouri al-Maliki. In a statement March 30, the coalition declared the need for “manual counting after the closure of booths in the presence of local and international observers, to not give any opportunity for skepticism about the integrity of the elections.”

The leader of the Supreme Islamic Council, Jalal al-Din al-Saghir, told Al-Ghad Press agency April 14 that fraud in the parliamentary elections is inevitable. He questioned the accuracy of the electronic count, emphasizing the possibility of cheating in the calculation of results.

In any case, a judgment about the efficacy of the electronic counting devices has not yet been issued by the Electoral Commission's specialized technical committees, which ensure that the equipment has been manufactured specifically for Iraq.

However, Basil Hussein, the deputy head of the Iraqi Center for Strategic Studies and an expert on electoral issues, told Al-Monitor that the center “has obtained information suggesting that the equipment imported by the commission suffers from a lot of stalling, contains batteries that are no good and cannot operate for long hours. It has not yet been subjected to tests by the committee and the only test it will undergo will be just days before the election.”

The commission said earlier this month that it will test the Miru system later in the month and could resort to a manual system as an alternative in case the electronic system does not work properly.

In terms of the possibility of fraud, Hussein said, “The most worrying element is that the results will be sent via a satellite headquartered in an Arab country [the satellite server is in the United Arab Emirates], without any encryption. After 200 hours, they will then be sent encrypted to Baghdad, meaning that there is a vast window of time to penetrate the results. This raises a lot of questions about the purpose of spending $100 million on buying these miserable devices and around $166 million on electronic servers, while leaving 200 hours without any oversight of the election results.”