Iran's supreme leader was uncharacteristically active in the government's response to the recent protests. 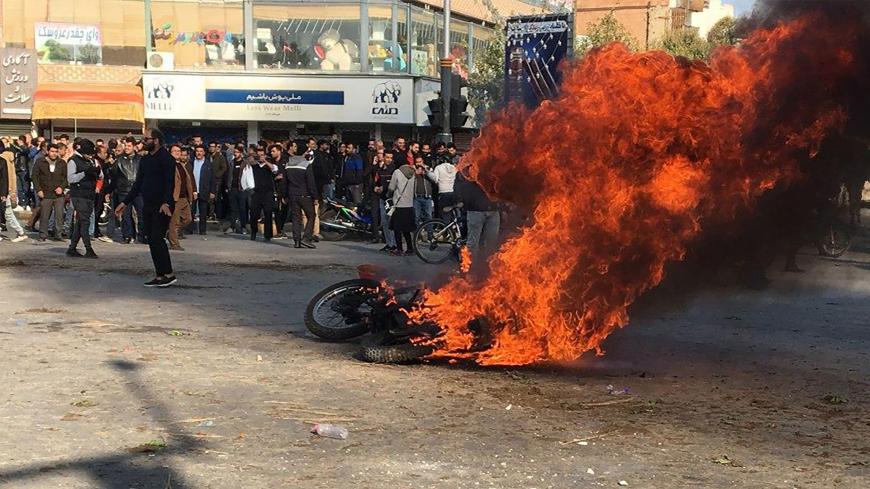 Iranian protesters gather around a burning motorcycle during a demonstration against an increase in gasoline prices in the central city of Isfahan, Iran, Nov. 16, 2019. - AFP via Getty Images

In a rare though not unprecedented move, Iran’s Supreme Leader Ayatollah Ali Khamenei indirectly acknowledged excesses in the crackdown on the protests that reportedly left over 200 dead, according to Amnesty International.

Ali Shamkhani, secretary of the Supreme National Security Council, presented Khamenei with a report about the protests over the recent fuel subsidy cuts. In response, Khamenei decreed, “Based on the existing legal framework, normal citizens who did not have any role in the latest protest and riots and lost their lives in the conflict will be considered martyrs.” The designation allows families to claim compensation and other benefits.

The Iranian authorities had labeled the protesters “rioters” and claimed there were armed individuals in the crowds. According to family members of some of those who were killed, some were caught in the middle of the protests. Khamenei’s decree is the first acknowledgement by the authorities of the excessive police response to the protests.

Despite Khamenei's decision, many family members are still struggling to find answers, and the government has pressured those asking questions to remain silent. According to the sister of Amir Hossein Kabiri, who was killed in the recent protests, the authorities pressured the family not to hold a mourning ceremony. His sister claims that witnesses told her he was shot by the police. Other family members have been arrested for speaking out on his killing.

The scale and intensity of the protests surprised many officials, perhaps one reason Khamenei took an active role both behind the scenes and in public. Immediately after the protests began, Khamenei made statements supporting the fuel subsidy cuts, stating that the move was supported by the three branches of government.

According to Khat-e Hezbollah, the SNSC held an emergency meeting regarding the decision to reduce fuel subsidies and agreed, “Given that the decision was already made, it was best to implement it because retreating from this issue would only make the riots and unrest more severe.” However, according to Khat-e Hezbollah, certain members of parliament were not satisfied and the SNSC approached Khamenei for help. Parliament speaker Ali Larijani read a short message from Khamenei in a closed session of parliament. Khamenei reportedly backed the SNSC decision, saying, “It must not be violated," and "Attention must be paid to the sensitive situation of the country.”

While Khamenei holds the ultimate power in the country and all major decisions are made through his office, he has been careful to cultivate the appearance of keeping a certain distance on state matters. This time, however, he threw himself into the fray. According to Khat-e Hezbollah, Khamenei’s decision had more to do with security than with policy. “It is clear that from here, the issue is not defending the correct or incorrect decisions of the administration,” the article read. “The root is the dangerous plan and plot the enemy tried to undertake.” Khamenei’s decision “to get in the battlefield,” therefore, was to “prevent unrest.”