The State Department is distancing itself from Congress’ vote to recognize the Ottoman Empire’s massacre of more than a million, mostly Christian Armenians as a genocide. 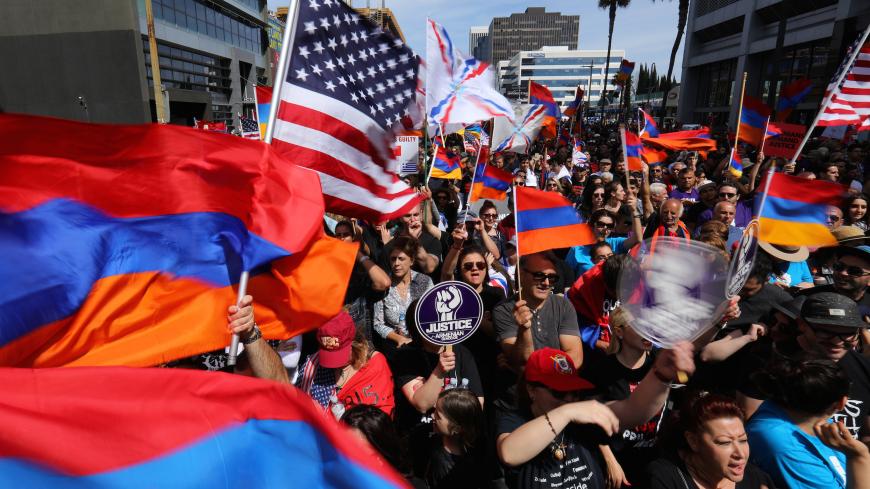 Protesters rally outside the Turkish Consulate in commemoration of the 102nd anniversary of the Armenian genocide in Los Angeles, California, April 24, 2017. - REUTERS/Mike Blake

The State Department is distancing itself from Congress’ decision to recognize the Ottoman Empire’s massacre of more than a million, mostly Christian Armenians as a genocide.

After the White House failed to thwart the Senate's effort to unanimously recognize the massacre as genocide on Dec. 12, the State Department released a terse statement today reiterating that the Donald Trump administration still does not believe the event qualifies as a genocide. The brief, unprompted statement does not refer to Armenia or to the title of the Senate resolution recognizing the genocide. Instead it simply refers to the legislation by number: Senate Resolution 150.

“The position of the administration has not changed,” State Department spokeswoman Morgan Ortagus said in a statement. “Our views are reflected in the president’s definitive statement on this issue from last April.”

The April statement commemorated the 1.5 million Armenians who were “deported, massacred or marched to their deaths in the final years of the Ottoman Empire,” but refrained from recognizing it as a genocide. Like every US president since Ronald Reagan, Trump has opted not to label the massacre as genocide for fear of alienating Turkey, which rejects the categorization.

Why it matters: The Senate’s decision to recognize the genocide last week — coupled with a House vote to do the same earlier this year — comes as Trump is seeking to ease tensions in the troubled US-Turkish alliance. Lawmakers opted to bring their resolution recognizing the genocide to the floor after Turkey launched its offensive into Syria against the Kurds there in October.

The Trump administration is also struggling to convince Turkey to abandon the Russian S-400 missile defense system, which has a powerful radar system that Ankara has been testing against US fighter jets. The president has so far refused to implement the legally mandated sanctions on Turkey for purchasing the S-400 as required under a 2017 law sanctioning Russia.

What’s next: Turkish President Recep Tayyip Erdogan has threatened to retaliate by recognizing the Native American genocide, although it’s unclear whether that will ruffle many feathers in Washington. The Senate is also likely to pass an annual defense bill that includes a provision lifting the arms embargo on Cyprus, adding yet another irritant to the strained alliance.

Know more: Read Al-Monitor congressional correspondent Bryant Harris’ round-up of all the punitive measures Congress has thrown at Turkey in recent months. Also read his story on how the White House had earlier mustered its Republican allies to block the Armenian genocide resolution in the Senate, a gambit that had been successful until last week.