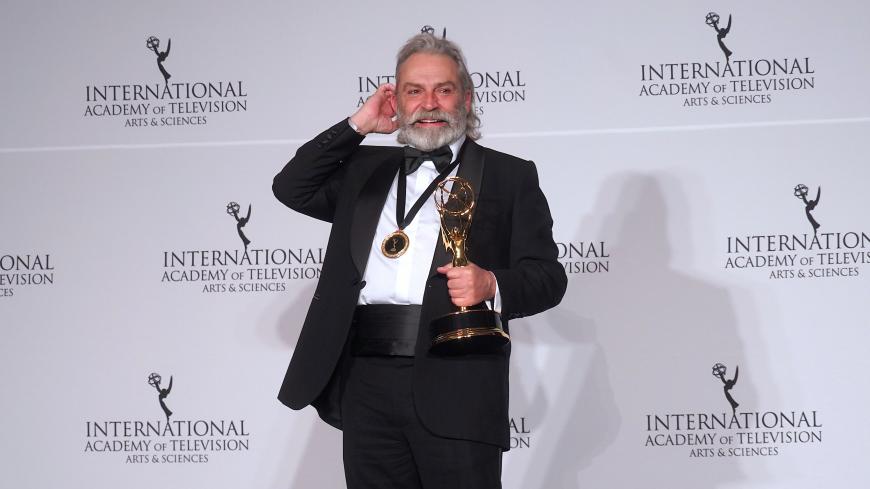 Doyen Turkish actor Haluk Bilginer received Nov. 25 the International Emmy Award for best performance by an actor, becoming the first Turk to receive the prestigious award. Bilginer clinched the honor for his mesmerizing performance in the 2018 mini-series "Sahsiyet" ("Persona") as Agah Beyoglu, a gentlemanly, well-dressed, retired court clerk who lives and owns an apartment in the central Istanbul district with which he shares a last name. Upon learning he has Alzheimer's disease, Beyoglu quickly opts to embark upon a serial killing spree, aiming to eliminate his former adversaries with the assurance that he will not remember his actions.

The series opens with Beyoglu realizing his cat has died because he failed to remember to feed and water it. At this point, he receives his diagnosis from a psychologist. After a brief period of mourning for his beloved pet, which he buries himself, he quickly snaps into action when he realizes his fading memory could be an asset rather than a setback. Bilginer deftly plays a character 10-15 years older than his actual age and is relentlessly natural and convincing in his performance as an elderly man in the early stages of Alzheimer's.

In his acceptance speech, Bilginer pleasantly greeted the New York City crowd with a Turkish "hello" before switching to his impeccably refined, practically seductive English, spoken in a deep, smoky manner. “Our series 'Persona' was about justice and amnesia. But not amnesia of an individual, but more dangerously and harmfully, amnesia of society. Therefore, please make sure the society you live in does not suffer from amnesia,” Bilginer said.

Born in the Aegean coastal city of Izmir in 1954, Bilginer studied at the prestigious London Academy of Music and Dramatic Art. His three-decade career has spanned genres, countries, television, film and theatre, and he has acted seamlessly in many roles in both English and Turkish.

Among his most memorable performances was in director Zeki Demirkubuz's modern classic 1997 film "Masumiyet" ("Innocence"), in which he plays Bekir, a down-and-out drifter who has wasted his life over the course of years following a prostitute, Ugur (in a masterful performance by Derya Alabora), with whom he is completely obsessed. While she won't let him into her life romantically, she begrudgingly allows him to accompany her from city to city where she works in different seedy nightclubs, as she is following her maniacal lover who is serving a lengthy prison sentence and is regularly transferred between different penal institutions throughout the country.

In one scene, Bilginer's character recalls in painstakingly detailed fashion his bleak saga to a new acquaintance (played by the equally versatile, veteran actor Guven Kirac) while sitting in a grassy field and wistfully taking hearty pulls of a thickly rolled joint while birds chirp nonchalantly in the background. It ranks among the most iconic scenes in modern Turkish film history, as Bekir manages to be pathetic and despicable while simultaneously commanding sympathy.

He also played the lead in acclaimed Turkish director Nuri Bilge Ceylan's 2014 film "Winter Sleep," which won the top award at that year's Cannes Film Festival. It is a challenging, even difficult, but ultimately rewarding three-plus-hour-long film, relying on Ceylan's penchant for extended dialogues. Bilginer plays Aydin, who lives a comfortable life in the scenic Cappadocia region where he owns a boutique hotel, writes newspaper columns, has a self-inflated sense of importance and exhibits minimal attention and care for those around him. He has a fraught relationship with his sister and loveless marriage with his wife (in an outstanding, stoic performance by Melisa Sozen) who is several decades his junior.

Perhaps one of the best-known character actors in the international movie scene, he has played the role of businessman Muhamed Al Fayed in "W.E.," a romantic comedy directed by Madonna, and Nazmi Kemal, an elegant publisher, in "The Reluctant Fundamentalist," directed by Mira Nair and based on the novel by Mohsin Hamid.

In his 60s, Bilginer has managed to stay as busy as ever in recent years, and the success of "Persona" may have overshadowed another fantastic one-season series he co-starred in — 2017's "Masum" ("Innocent"), a psychologically charged family drama with a star-studded cast. While "Persona" was aired free on Puhutv with ads, "Masum" aired on Blutv, a streaming service similar to Netflix that charges a monthly membership fee.

Another 2017 effort, the short film "The Last Schnitzel," was less than well-received by Turkish authorities, as the futuristic comedy film starring Bilginer as a dictator was unceremoniously banned from theaters in Turkey. It was just one of the numerous films that have fallen victim to the harsh environment that independent cinema, in particular, has attempted to thrive within in recent years in Turkey, battling self-censorship and intervention from the state.

Upon returning to the Istanbul airport from the Emmy ceremony in New York, Bilginer offered some cheerful remarks to reporters. “Even being a candidate for this award was very important and made me very happy. Winning the award is an occasion of happiness for me, but what really makes me happy is that this award was met with happiness and pride in Turkey. This really made me happy. It means that there was this need for this kind of energy. Everyone is happy, and for that reason, I am happier,” Bilginer said in an uplifting statement.

The fact that Turkey's first International Emmy Award came from a show that aired on a streaming site is of no small significance, given the banal, sterile nature of Turkish mainstream television, where challenging and provocative shows like "Sahsiyet" would not be aired.

Bilginer's initial comments while accepting the Emmy Award on stage should not be swept under the optimism and cause for celebration for the actor's undeniably significant achievement. In a Turkey where governments have tried to cover up notorious massacres and other traumatic events and eliminate them from the public consciousness, and given that the currently constant revolving cycle of a chaotic news agenda has already produced short-term amnesia regarding even the most bizarre and disturbing events, Bilginer's comments on the dangers of a society becoming engulfed with amnesia are meaningful as ever.