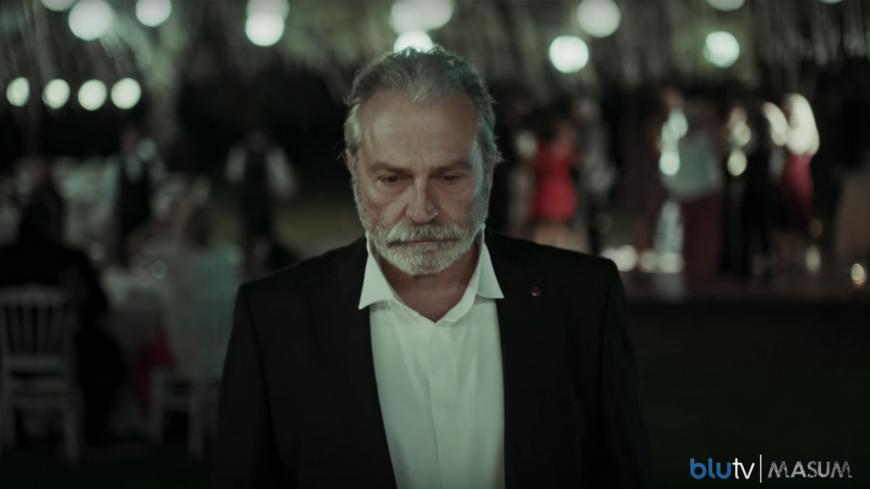 A still from "Masum" starring Haluk Bilginer, which was streamed on BluTV. Posted Jan. 15, 2017. - Youtube/blutv

Something is stirring in the Turkish television sector. Over the last two years, a new crop of well-produced, innovative TV series has been appearing on laptops, tablets and telephones across Turkey. Digital streaming services are now transforming the future of Turkish TV.

At the beginning of 2017, residents of Turkey’s major cities began noticing advertisements for something called "Masum" ("Innocent"), with the faces of famed actors Haluk Bilginer, Nur Surer and Ali Atay staring out at passersby from posters on bus stops and street intersections. “Masum," it turned out, was a new series being streamed on a service called BluTV.

The first episode of "Masum" was available online for free. However, to watch the other episodes of this innovative series, directed by Turkish cineaste Seren Yuce, one had to sign up for a digital membership at a cost of 9.90 Turkish liras ($1.85) per month. Drawn in by the gripping plot — a family saga where nothing is as it seems — and compelling public ads, “Masum” enticed thousands of Turks to become BluTV subscribers.

At the end of 2018, Turkish TV reached another milestone. On Dec. 14, Netflix launched the first production by a full Turkish cast and crew: “Hakan: Muhafiz,” known internationally as "The Protector." After the success of other Netflix productions — “Ingobernable” (Mexico), “Dark” (Germany) and “Sacred Games” (India) — Netflix had decided to try its hand at the Turkish market.

At a press conference in Istanbul Dec. 4, Kelly Luegenbiehl, Netflix vice president of international originals, made a prediction regarding “The Protector,” saying, “We think that audiences all over the world will love this production. We believe that 137 million people in 190 countries will show very positive reactions when they watch this series.”

Though reviews of “The Protector” have been mixed, the show has garnered enough buzz to continue a second season. The suspenseful and fantastical plot, featuring a young man working in the Grand Bazaar fulfilling his destiny to save Istanbul, has made the show popular in Turkey and abroad. It features Cagatay Ulusoy as the show’s heartthrob lead.

Between the rather sudden appearance of “Masum” and the high-profile launch of “The Protector,” Turkish TV has begun a new chapter. What lies behind the success of this original content available for streaming in Turkey?

Sarp Kalfaoglu, head of drama at BluTV, told Al-Monitor that many viewers are tired of the Turkish cable TV networks. “Like the soap operas in the Middle East or Latin America, Turkish series are stuck in the same format. The national channels don’t move beyond certain 'safe' topics,” he said.

Turkish TV series are notorious for their length and repetition. A popular program such as the detective “Arka Sokaklar” ("Back Streets") has now reached over 500 episodes, each averaging roughly 126 minutes. Combined with Turkey’s lengthy commercial breaks, a show lasts nearly three hours per episode.

Turkish melodramas, like the romantic intrigue "Ask-i Memnu" (“Forbidden Love”) of the late 2000s, have been exported as far as the Balkans and Latin America, and boosted a general interest in Turkey. Yet young and savvy viewers in Turkey are rejecting cable TV. Some only watch foreign series such as “Breaking Bad,” “Game of Thrones” and “The Walking Dead,” which are very popular. Many of these shows are illegally streamed on pirate websites.

It is this Turkish viewer — caught between nationally produced shows that are disappointing or intriguing imported shows — that BluTV seeks to reach. The company, part of the Dogan Media Group, has been very successful at sparking interest in their well-funded original series.

BluTV’s head of content, Deniz Sasmaz Oflaz, told Al-Monitor that Turkey’s young population easily adapts to new technological developments. At first, it is difficult to convince the viewer to take out their credit card and pay to watch a show online, but many have made the switch to the membership system. “What makes this worth it for them is the original content,” she said.

The site has also acquired popular foreign shows such as “The Young Pope” and “The Handmaid’s Tale.”

The creatively shot detective story “Masum” was BluTV’s first original series. Since then they have released an array of new content-spanning genres. “7Yuz” ("7Faces") is an innovative mini-series with seven plots. Tunc Sahin directed four episodes and Umut Aral, Alphan Eseli and Ceylan Ozgun Ozcelik one each. One episode even features celebrated thespian Genco Erkal.

"Sifir Bir - Bir Zamanlar Adana'da" ("Zero One - Once Upon a Time in Adana") is a mafia show. This popular series originally started when young people filmed the gritty reality of their home town. After racking up a large number of followers with two self-published seasons on YouTube, they signed with BluTV to continue professionally.

Another major source of new subscribers for BluTV was "Yasamayanlar" ("The Unliving"), the first serious stab at a Turkish vampire story since the 1970s heyday of Yesilcam, the Turkish Hollywood. Then there is the absurd everyday life comedy "Bartu Ben" ("I’m Bartu"). Actor and musician Bartu Kucukcaglayan writes and stars in a raucous self-parody of the Turkish creative industries. With its meta-humor, foul language and true-to-life characters, “Bartu Ben” is becoming a cult classic.

Besides BluTV’s latest production, the atmospheric series "Bozkir" ("Steppe") is reminiscent of “True Detective.” In addition, BluTV has produced a travel show, a horror show and various documentaries, including a collaboration with the alternative media collective 140journos.

Unsurprisingly, BluTV is not the only company trying to corner this new market. puhutv, part of the Dogus Media Group, has also released original series on its video-on-demand platform. Its journey began in 2017 with "Fi," an adaptation of Azra Kohen’s popular romance series.

In 2018, puhutv released its first truly noteworthy series: "Sahsiyet" ("Personhood"). Featuring a cast with such luminaries as Haluk Bilginer, Sebnem Bozoklu, Mujde Ar and Humeyra, “Sahsiyet” made a splash with its riveting plot and stylish mise-en-scene. The screenplay was written by controversial novelist Hakan Gunday.

Can Kilcioglu, an award-winning young director, thinks one reason for the appeal of these new series is how realistic they are, especially compared to cable TV. He told Al-Monitor, “When you watch TV it’s like these people are all living in a utopia. You can’t even tell what country the action is taking place in. … The characters are separated from every real-life struggle. … On the internet more three-dimensional projects are possible.”

BluTV and puhutv both succeed in their nuanced depiction of Turkish realities. Their series include gay and trans characters, Syrian refugees, portrayals of middle-class office life, smoking, drinking, drugs and sex.

Sasmaz Oflaz insisted that BluTV is not going out of its way to be controversial. She said, “If you’re trying to portray real life, you’ll get into such topics either way. They are a part of life. What makes us different is we try to tell a story just like it would happen in reality.”

When even cigarettes and alcohol are censored on network TV, let alone more controversial topics, this realness strikes a chord with viewers.

It’s not all smooth sailing ahead for BluTV and puhutv, however. In an interview with NTV, Deputy Prime Minister Fikri Isik announced in March 2018 that Turkey’s Radio and Television Supreme Council (RTUK) is taking steps to ensure that digital programming would also be subject to its regulations. Isik said that there was “some serious outrageousness on the internet,” implying that certain content might be censored.

Kalfaoglu from BluTV admits that RTUK oversight is probably inevitable. “We might be limited in how things like alcohol, cigarettes and sex can be represented, but we will still keep telling our stories in an original way. In fact, sometimes restrictions can encourage creativity,” he noted.

Sasmaz Oflaz said BluTV will not give up. In fact, it is expanding. In addition to BluTV International, which offers English subtitles, BluTV Arabic has launched, providing content to Turkey’s neighbors. The next phase will likely be establishing BluTV Latin America.

As for BluTV’s Turkish content, Kalfaoglu hinted that the next project will be a show resembling popular cable series, but done cleverly. “Think of it like a Turkish 'Big Little Lies.' We will tell the story of a woman’s struggles, but not from a misogynistic viewpoint. It will be from her own perspective,” he said. 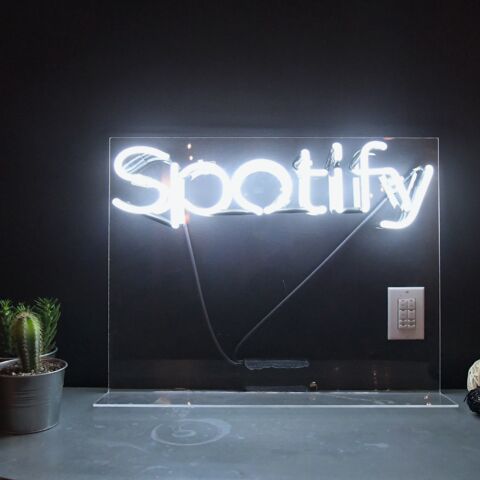 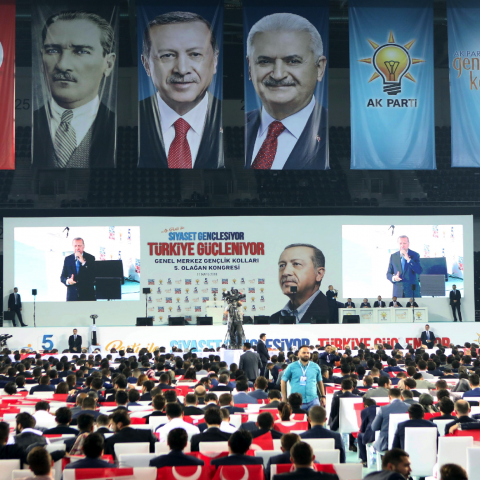 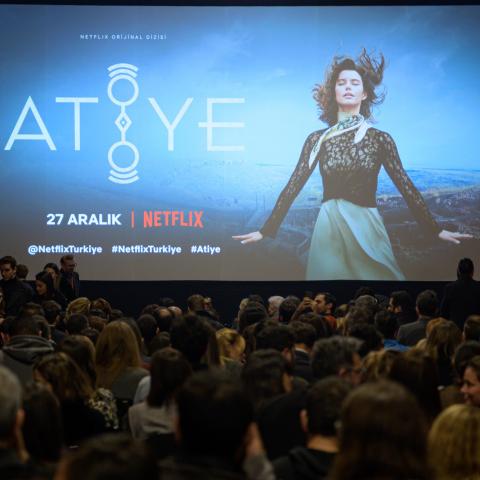