Turkey says that Syrian refugees are moving to an area under its control in northeast Syria, two months after capturing the strip of territory from Syrian Kurdish fighters. 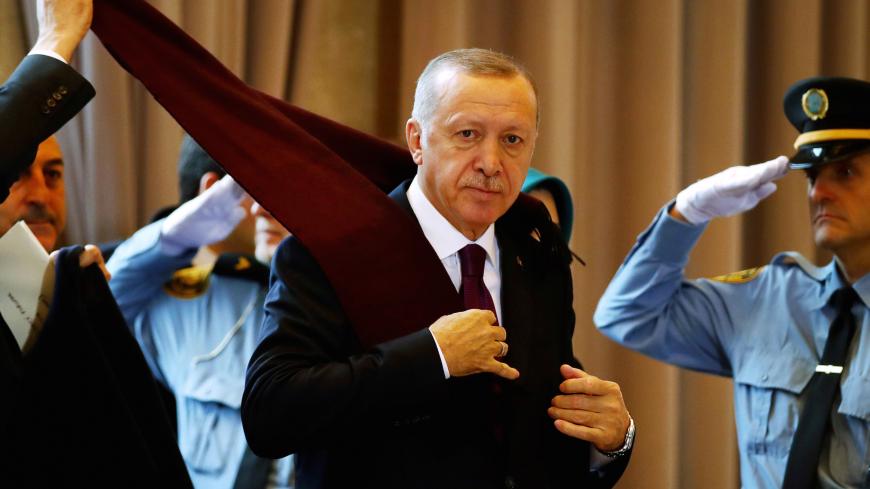 ISTANBUL — President Recep Tayyip Erdogan reiterated his call to the international community Dec. 17 to support his plan to resettle at least 1 million refugees in an area Turkey captured from Syrian Kurdish fighters, saying returns are already underway while lamenting the lack of interest from wealthier countries in his project.

Turkish officials say Syrians are returning to the area east of the Euphrates River after Turkey launched a military operation in October against a Kurdish Syrian militia, the People’s Protection Units (YPG). Turkey saw Kurdish control of territory near its border as a security risk because of the YPG’s links with Kurdish militants who have waged a three-decade insurgency inside Turkey.

Erdogan did not provide an exact number of returnees in the roughly 3,600-square-kilometer (1,340-square-mile) area it controls between the Syrian towns of Tell Abyad and Ras al-Ain. A total of 371,000 people have returned to the three areas under the Turkish military’s control in Syria, which total about 8,200 square kilometers, he said in a speech at the UN Global Refugee Forum in Geneva.

In addition to crippling Kurdish aspirations of self-rule in northeast Syria, the Turkish military also sought to carve out a “safe zone” south of the Turkish border to settle some of the 3.7 million Syrian refugees who have found safety in Turkey.

But the incursion unleashed a new wave of flight, with some 200,000 people fleeing the violence in October. The UN says about 123,000 of those people have returned since Turkey agreed to a cease-fire brokered with the United States and Russia.

Turkish officials told reporters over the weekend that between 55,000 and 60,000 people had returned to the safe zone. An Interior Ministry spokesman was unable to say how many people have returned to Tell Abyad and environs.

Turkey recently reopened the Akcakale border crossing, which connects to Tell Abyad and was closed in 2014 after the Islamic State (IS) swept through the area. Turkish media have reported only a handful of returns at the crossing, including 537 on Dec. 3, 250 on Nov. 26 and about 70 on Nov. 22.

The Defense Ministry said Nov. 21 that 200 Syrians who were living in Turkish-controlled Jarablus, about 100 kilometers west of Tell Abyad, had volunteered to return to the area. The UK-based Syrian Observatory for Human Rights last month cited local sources as saying people were moving from Jarablus to the Tell Abyad area on a daily basis.

Turkey outraged its traditional Western allies when Erdogan ordered the operation against the YPG. Allies argued it would undermine the fight against IS by targeting the YPG — a key partner in the US-led coalition to defeat the group.

Erdogan’s hope to attract $3.5 billion from international donors to build new towns for refugees south of Turkey’s border has found a cool reception among European leaders. He complained at the Geneva forum about the lack of encouragement from the international community for the safe zone plan.

”When we say safe zone, they say, ‘How nice.’ When we say, ‘Show support,’ those with the most money merely smile at us. When it comes to support, there is no support, unfortunately,” he said in comments broadcast live on Turkish channels. But he added that he still hopes to build the zone and called on the UN to help organize a donors conference.

Russia, which sent troops to the area after US President Donald Trump yanked American forces out of the way of Turkey’s military, has also dumped cold water on Turkish control of a safe zone along the expanse of the border. Vladimir Putin’s Syria envoy said last week the safe zone would be confined to the strip Turkey now administers.

Moving refugees out of Turkey stems from fatigue with its role as the world’s largest host of refugees. At the forum, Erdogan said that 516,000 Syrian babies had been born in Turkey since the start of the eight-year Syrian conflict, and that almost 1.7 million Syrian children are in Turkish schools, about 63% of the child refugee population.

Turkish officials, speaking on condition of anonymity, dismissed European criticism that the military operation aims to disrupt northeast Syria’s delicate demographics. They argue that the YPG had already changed the ethnic makeup in towns like Tell Abyad and Ras al-Ain, which have significant Arab populations, as well as Kurds and Christians.

They emphasized that returns are voluntary and Turkish security forces are providing security and humanitarian assistance. Turkey has been accused of forcibly deporting Syrian refugees to other parts of Syria in recent months, charges the government rejects.

The officials said Syrian Kurds from Tell Abyad and Ras al-Ain, who had left since the YPG took the area from IS in mid-2015, had “already started moving” into the area. “Our expectation is that the most likely first group of people to go to the safe zone might be the Syrian Kurds who were forced out by the YPG from Tell Abyad, from Ras al-Ain,” they said.

Turkey says 300,000 or more Syrian Kurds are sheltering in Turkey. It was not clear when they arrived in Turkey and from which areas. More than 200,000 Kurds reached Turkey in 2014 after fleeing IS during the siege of the town of Kobani.

Foreign Policy quoted a researcher with the pro-Kurdish Rojava Information Center as saying that the refugees returning to Tell Abyad are from other parts of Syria and even Iraq. The researcher said they may be the families of Syrian opposition fighters who, with the backing of Turkey, fought on the front lines during Turkey’s last two incursions into Syria.

Turkish-backed rebels may be barring the return of Kurdish families who were displaced by the Turkish incursion and have looted and seized their property, Human Rights Watch said last month. Separately, Syrian Kurds who have been displaced by Turkish military actions in northwestern Syria have staged protests.

Syrians who fled Turkey’s military operation for Iraq say they are too afraid to go back, according to a survey by the Norwegian Refugee Council. It found that 95% of the 10,000 or so people sheltering in the Bardarash camp in northern Iraq said they plan to remain in Iraq due to continued fighting in Syria or because their homes were destroyed. Others feared retribution by Turkish or Syrian forces or forced conscription by the YPG or the Syrian army.