The spin Turkey's president puts on his country's most recent incursion into Syria wanders far from reality. 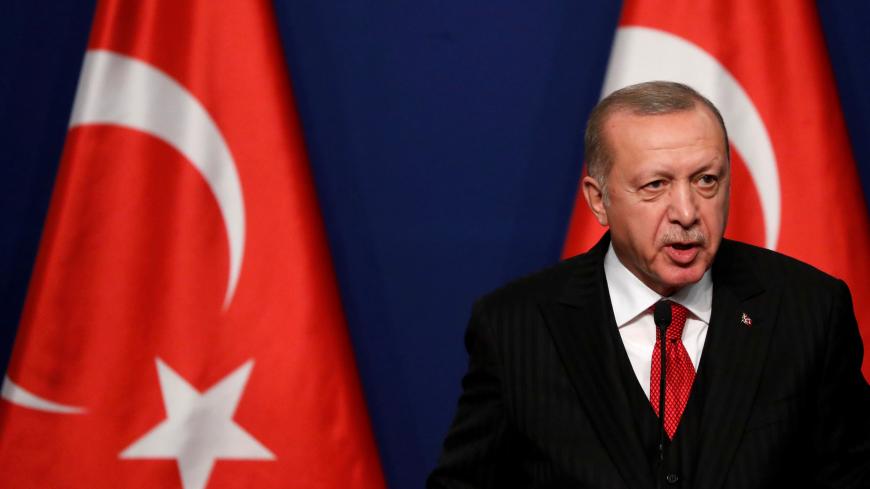 Turkish President Recep Tayyip Erdogan has been introducing his own version of newspeak to Turkey’s public since the Syrian civil war erupted in 2011. This new lexicon emerged with abnormal policies including Ankara’s “open border” policy — not just to Syrian refugees but also weapons, ammunition and militants. This vocabulary allows for incredible, fantastic claims and figures about Syria’s losses, the number of refugees Turkey accepted, expenditures, population figures and demographics.

Recently, Erdogan has been using a colorful Syria map outlining occupied areas and arenas of influence. In a recent interview on Turkey’s state-owned television channel TRT, he said the Astana peace negotiations had prevented Idlib from becoming a lake of blood.

He also had some eye-popping statements about northeast Syria — the mainly Kurdish area Turkey's military invaded with its Operation Peace Spring — and how it isn't right for the Kurds. The land is more appropriate for Arabs, he said.

"[Idlib province] is huge," he said. "These areas are not suitable for the lifestyle of Kurds … because these areas are virtually desert."

But Idlib is not a desert. To the contrary, it is widely known as an agricultural area. Its western side is forested. Parts of it are arable. Its eastern side is dry land. Topographically, Idlib is an extension of the productive soil of Turkey’s border province of Hatay and of Syria’s forest-covered Latakia. There are orchards of olives, apples, figs, pomegranates, nuts and almonds; vineyards; and fields of wheat, barley, corn, cotton, potatoes and tomatoes. Despite its hilly terrain and dry patches, Idlib is an agricultural zone.

Erdogan also makes incredible claims regarding Idlib's population, which he puts at 4 million.

Idlib is 90% under the control of UN terror-listed Hayat Tahrir al-Sham (HTS). Before the war, its population was estimated at around 1.5 million. Since then, hundreds of thousands of Syrians have fled to and from the province. Recent estimates put the figure at roughly 3 million.

One of his oft-said declarations is “Manbij is an Arab town; 90% of its population is Arab." According to other sources, 70% to 75% of Manbij residents are Arabs; 15% are Kurds; and the rest are Turkmens, Circassians and Armenians.

Erdogan also uses misleading information about Kobani. On Oct. 10, while rejecting allegations that he was fighting against the Kurds in general, rather than strictly against Kurdish terrorists, he claimed to actually embrace the Kurdish people. “At the moment, 300,000 Kurds who came to our land from Kobani live as our guests, he said.” On Oct. 24, he added 50,000 to his figure, saying that “350,000 people from Ain al-Arab [Kobani] have been in Turkey since the days of [US President Barack] Obama.”

Kobani's central population is estimated at 40,000 to 44,000. With its nearby villages and peripheries that figure would be about 81,000.

According to Kobani officials, the vast number of Kurds who fled to Turkey to escape Islamic State (IS) attacks have returned home. In 2014, when IS entered Kobani, it was estimated that about 150,000 to 200,000 of its citizens fled to Turkey. When Operation Peace Spring managed to secure only Tell Abyad and Ras al-Ain, Erdogan said, “Tel Rifaat and Kobani must come under our control. Our Syrian brothers [refugees] will be coming to them.”

There were only three farm houses at Kobani at the end of the 19th century. Armenians came after 1915, followed by the Kurds, who gave it its Kurdish character in the last century. Now 90% of the town is Kurdish; the rest are Arabs, Turkmens and a few Armenians. People from Raqqa, which was razed during the war, relocated to Kobani. In 2018, some of the Kurds who fled from Afrin during Turkey’s Operation Olive Branch also moved to Kobani.

Erdogan’s demographic knowledge of Tell Abyad, which was liberated from IS by the Kurdish People’s Protection Units (YPG), was dismal. Erdogan actually said, “OK, so who owns that place? Ninety-five percent are Arabs and Turkmens, and 5% are Kurds.”

According to various sources, some 60% to 65% of Tell Abyad citizens are Arabs, 25% to 30% are Kurds and 10% to 15% are Turkmens; there are also a few Armenians. Erdogan, while promoting Manbij, Tell Abyad and Ras al-Ain as a totally Arab region, is visualizing an Arab Crescent. Although he never forgets to say, “We respect Syria’s territorial integrity,” he doesn’t see the contradiction in his next utterance: “For us, Tell Abyad and Ras al-Ain are like acquired rights.”

While promoting the use of armed groups against the Syrian regime, Erdogan constantly uses exaggerated and manipulated figures. For a long time, he has applied this strategy to his rhetoric about the Syrian president, recently reiterating, “Bashar al-Assad killed nearly 1 million people in Syria.”

The London-based Syrian Observatory for Human Rights (SOHR), which was established by the opposition, said it documented 371,222 war-related deaths in Syria from March 15, 2011, to March 15, 2019. (This total doesn’t include those who died in prisons and those missing in action.)

Of the deaths, 112,623 were civilians. Another 77,000 fatalities were regime, Russian and Turkish forces, opposition groups, IS and other jihadist factions, the US-led international coalition and Syrian Democratic Forces.

Erdogan also has contradictory, jolting numbers about refugees. He sometimes says there are 3.6 million refugees in Turkey, and sometimes 4 million.

Amnesty International reports Turkey has taken in 3.6 million refugees in total over the past eight years. But once refugees are registered in Turkey, they aren't crossed off the rosters when they leave. According to the German Center for Integration and Migration Research, the more realistic number of refugees in Turkey is 2.7 million to 3 million.

To pressure the European Union, Erdogan keeps saying Turkey has spent $40 billion on refugees. Mustafa Sonmez, an economist writing for Al-Monitor, estimates Turkey spent $24 billion between 2013 and 2019 — that leaves $16 billion unaccounted for.

These are a few of the contradictory figures Erdogan relies on to cover his confusing Syrian policy. There is no tradition of confirmation in Turkey. If a strong leader gives a figure, that becomes the gospel. This is why, despite all, Erdogan keeps repeating unreliable data to influence the thinking of his people.