Several groups in Egypt and the Middle East are calling for an end to male circumcision, saying the risky operation is not justified for medical or religious purposes. 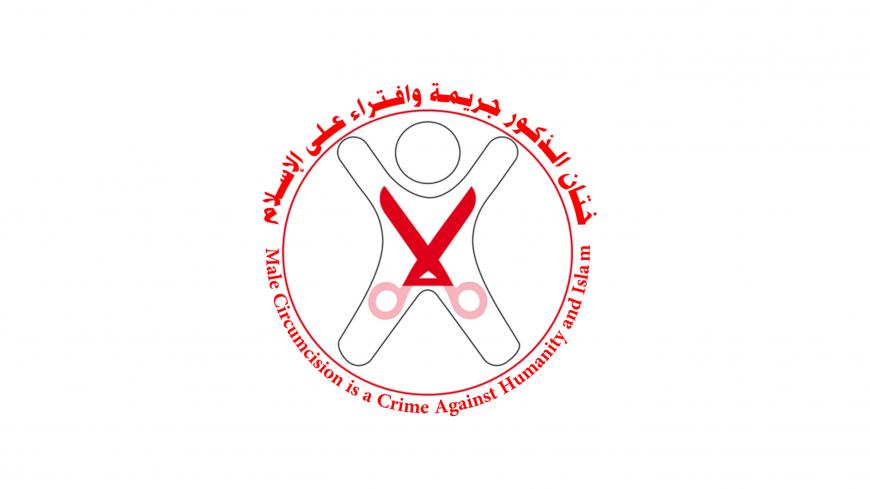 The logo of the group Male Circumcision is a Crime Against Humanity and Islam. - Facebook/savekidsofcircumcision

Like many Egyptian families, Amina and her husband celebrated the circumcision of their son with a ceremony at home with the family. In their village near the northern Sharqia governorate, a circumciser carried out an operation to remove the skin from the tip of the 7-month-old's penis. The baby received many presents, mostly gold and other valuables.

But the bleeding after the operation did not stop.

They hurried their baby to the hospital, where the doctor told Amina that her son was at risk of a permanent deformity and had barely escaped from death due to loss of blood.

“No words can describe my misery when they told me my son risked death or impotence,” Amina, 27, told Al-Monitor.

Amina's son survived, but risky circumcisions are common in Egypt, given that many families in the countryside choose to perform circumcisions at home rather than in a sanitized clinic. In cases like this, usual calls are issued for parents to have the operation performed at a hospital. Yet, this time, new groups are questioning whether circumcision makes sense biologically, culturally or even religiously.

“The issue is considered a taboo because it has three sides: cultural, religious and medical. This makes our fighting even harder,” said Nidal el-Ghatis, the Palestinian-Australian author of the book “Male Circumcision Is a Crime Against Humanity and Islam.” Ghatis is also an administrator of a Facebook group with the same name.

Though circumcision is seen as a common practice in those two countries and beyond, more people are questioning this tradition, according to Ghatis.

“In our Facebook group, we offer many articles and posts by specialized physicians from different countries, including Egypt, the Gulf, Morocco, Palestine and others, to make people think of the negative aspects of circumcision," he told Al-Monitor. "Our efforts are snowballing over the years and many people joined us.”

Advocates of circumcision say that the small operation, usually carried out anywhere from seven days after birth to 15 years, can reduce the risk of cancer and lower the risk of HIV and sexually transmitted infections. Critics quote studies that claim circumcision reduces sensitivity, causing premature ejaculation, and that the operation itself is risky as it may cause excessive bleeding.

​Seham Abdel Salam, an Egyptian doctor specializing in public health, sees both FGM and MGM as severe, medically unnecessary and a source of pain and trauma for children.

“Surgeries should be done only when they are necessary," Abdel Salam said. "If a child or a baby is healthy and there is nothing wrong with his health, why should I do this surgery and take a sensitive part of his body, which is beneficial to him, without even his consent?”

Abdel Salam, who is also an anthropologist, wrote a study titled, "Male Genital Mutilation (Circumcision): A Feminist Study of a Muted Gender Issue."

“Circumcision is mainly related to ‘culture,’ not religion. Jews, Muslims, Baha’i, many [Eastern] Christians and even nonreligious people do it," she said. "This culture should be changed."

Abdel Salam has also created a small information center to provide families and researchers with documents, books and multimedia on the topic.

​Some researchers believe male circumcision originated in Egypt, based on the narrative of the Greek historian Herodotus, who said pre-Islam Egyptians practiced circumcision for the sake of cleanliness.

Circumcision is an obligatory ritual in Judaism. It is not mentioned in the Quran. However, it is highlighted in some of the Prophet Muhammad's sayings and became a sunnah, or a good deed.

Preacher Ashraf Saad Mahmoud told Al-Monitor that male circumcision is a tradition in Islam, citing a hadith, or saying, of the prophet. This particular hadith, narrated by Abu Huraira, a companion of the prophet, reads: "Five things are in accordance with al-Fitra (i.e., the tradition of prophets): to be circumcised, to shave the pelvic region, to pull out the hair of the armpits, to cut short the mustaches and to clip the nails."

Mahmoud explained that the hadith proves that male circumcision is a well-established practice in Islam. "However, Muslim scholars disagreed over whether it's obligatory or not," he said. "Three Imams out of the four Sunni grand Imams — Malik, al-Shafii and Ahmed bin Hanbal — said it is obligatory. That means men who are not circumcised are sinning."

He said, "Perhaps the reason for this is that the foreskin may be infected by microbes and impurities that cause diseases, endangering the wife's health. The foreskin also limits the wife's enjoyment in the marital relationship."

He continued, "The fourth Sunni Imam, Abu Hanifa, said that male circumcision is sunnah and therefore not obligatory. According to Abu Hanifa, there is no sin if men are not circumcised. But men, in this case, should look after personal hygiene."

Saeed Abdel Moty Hussein, the founder of the Facebook page Egyptian Movement to Fight Male Circumcision, said that anti-MGM movements have a long way to go.

“We are still fighting online and on social media, because it is much easier than fighting through local media … as it will be confronted by a strong refusal from religious institutions like Al-Azhar,” Hussein told Al-Monitor.

Amina's circumcision scare was more than a year ago, but today she is worrying less about social norms, as she is pregnant with her second child, another boy. Tapping her belly, she said she may just let him go without the circumcision ceremony.