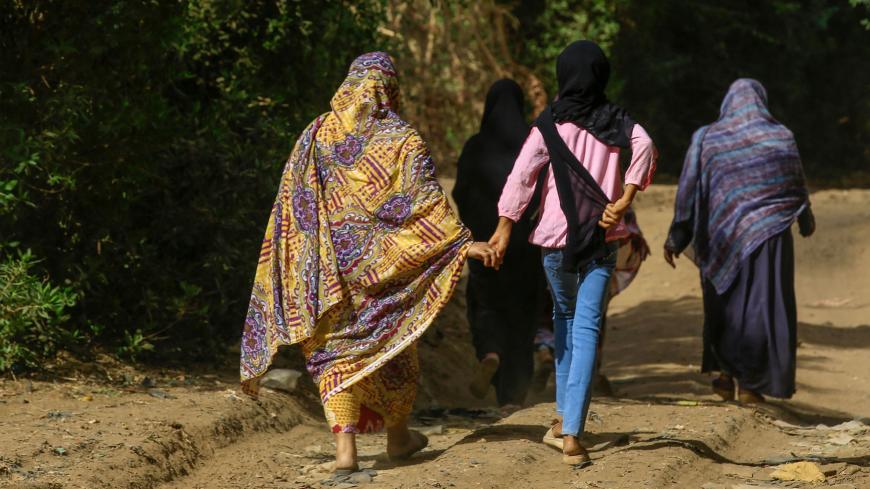 Sudan reportedly made female genital mutilation illegal in late April, drawing praise from the international community. But some female activists in the African country say this will not lead to the end of the harmful practice.

One Sudanese leader of a civil society organization working for women’s rights said that the state is duping the outside world on the issue in the same way it did under deposed former ruler Omar al-Bashir.

“This is a way to maneuver and raise expectations,” Hala al-Karib, regional director of the Strategic Initiative for Women in the Horn of Africa, told Al-Monitor. “It’s misleading the international community with the same tools as Bashir.”

Several female activists in Sudan feel the law is not sufficient to stop female genital mutilation in the country, where it is still widely practiced.

Female genital mutilation, also known as female circumcision or FGM, is the physical removal of a woman’s external genitals. It is usually done to girls before puberty. The practice leads to health issues for victims, including chronic pain, difficulty urinating and menstruating, childbirth complications and deadly bleeding, according to the World Health Organization.

The practice occurs in Sudan and other African and Middle Eastern countries. It is particularly prevalent in Sudan, where 86.6% of women underwent the procedure in 2014, according to the United Nations. The Sudanese media outlet Dabanga reported in 2018 that 65% of Sudanese females were subjected to the procedure.

Sudan is not the only country where some demand its prohibition. Many Egyptians voiced support for stricter laws regarding female genital mutilation after a girl bled to death there following the procedure in January.

Sudan received praise and significant international media coverage after news broke it had outlawed female circumcision. The UN’s organization for children, UNICEF, called it a “landmark move” in a press release.

The outlawing took the form of an amendment to Sudan’s Criminal Law Article 141 and was endorsed by both of Sudan’s executive councils, according to UNICEF.

A transitional government took power in Sudan last year after Bashir — who ruled the country for 30 years and has long been wanted by the International Criminal Court — was overthrown via a coup amid protests.

Karib said she is skeptical the law will succeed because nobody actually knows what the law is. “Basically, we haven’t seen law,” she said. “Nobody seems to be aware of the content of the law. The transitional government is using the same piecemeal approach rather than actually reforming the overall legal framework, which is based on discrimination.”

Sudan has many laws that restrict women’s rights. For example, women cannot travel with their children without the father’s permission. The legal marriage age is set at 10 years.

There have been past laws against female genital mutilation in Sudan, and the overall legal framework discriminating against women needs to be reformed for the practice to stop, according to Karib. “The most important thing is to fundamentally reform the legal framework,” she noted. “Women in Sudan can’t get birth certificates for their children without a male guardian. Reform it so it is more respectful and treats women with dignity.”

The Sudanese government had signaled it would stop female genital mutilation before. In 2003, it signed the Maputo Protocol alongside other African nations that pledged to stop the harmful practice.

Al-Monitor’s efforts to contact the Sudanese government about the law were unsuccessful.

Karib is not alone in her thinking. Maimona Fator is a Sudanese activist working to stop violence against women. She said the law will not be able to stop female genital mutilation, especially in rural communities where the authorities are not present.

“It continues in many parts of the countryside and villages where people move from place to place in search of pastures,” Fator told Al-Monitor. “They are far from police stations. The presence of young girls in places of displacement and remote villages makes it hard to punish the offending parties or apply the law to them.”

Families practice female circumcision in secret, likewise making it difficult to prosecute, according to Fator.

The UN also warned the law would not be enough to end female genital mutilation in the country. The UNICEF statement on the law said it needs to be enforced and that awareness needs to be spread in communities to actually put an end to female circumcision.

It is possible there have been changing attitudes in Sudan on female genital mutilation in recent years. A UNICEF report from 2013 noted more women recognizing its dangers. Khatib said the practice actually increased over the past 30 years, especially in rural communities.

Many Sudanese remain skeptical the law will succeed. Walaa Salah is an activist in the Sudanese capital of Khartoum. She said the public has not been made aware of the law’s exact nature. “While the concept of criminalizing FGM in itself is important, we need to know who is criminalized by the current amendment,” she told Al-Monitor. "There is still a lot of information that is missing for a Sudanese citizen to form an informed opinion."