Egypt tells media not to report yet on reshuffle, governors

Egypt has forbidden the media from reporting on the appointment of new governors and the upcoming Cabinet overhaul until authorities issue official releases. 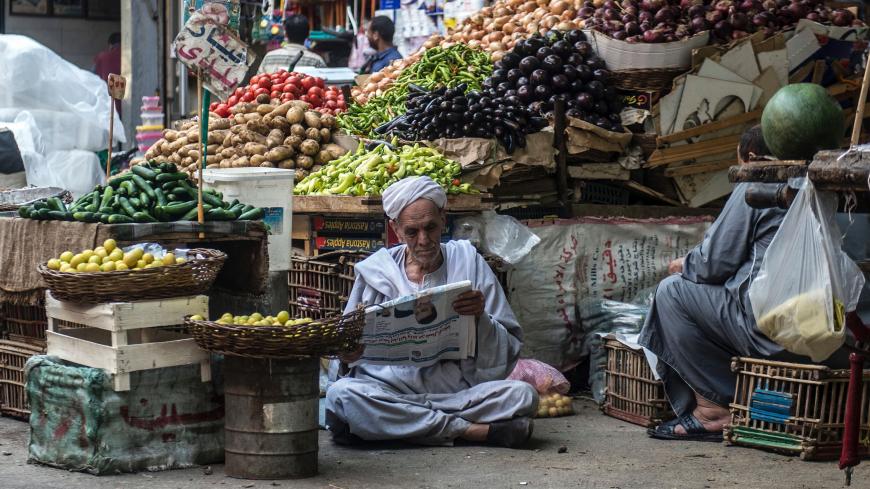 An Egyptian vendor reads the newspaper outside his fruit and vegetable stand, Cairo, Egypt, May 15, 2017. - KHALED DESOUKI/AFP via Getty Images

CAIRO — Egyptian authorities are preventing the circulation of any unofficial news on the appointment of new governors and the upcoming Cabinet overhaul in Egypt, a well-informed security source revealed to Al-Monitor.

The source, who spoke on condition of anonymity, said officers from the Ministry of Interior's National Security Sector had notified editors of national and private newspapers and satellite channels of the ban.

It further explained that the government reshuffle process is subject to tight confidentiality so as not to cause confusion, especially since no final agreement has been reached on the ministers who will be replaced.

On Nov. 27, Egyptian President Abdel Fattah al-Sisi appointed 16 new governors and 23 deputy governors, and they were sworn in.

As for the ministerial change, that was supposedly kept secret. But Youm7 newspaper, which is close to the regime, had reported Nov. 26 that the final list of candidates in the upcoming reshuffle would be submitted to Sisi once the security authorities approve of the candidates.

Government sources who spoke to Youm7 refused to say when the list of candidates would be announced but did say the ministerial reshuffle is "imminent" and everything will be announced clearly and transparently in due time. The sources also refused to disclose the names of the ministers involved or how many there are. “Nothing can be announced now, as circumstances may change," the Youm7 story said.

This comes days after news spread that a Cabinet reshuffle will include many ministries.

Journalist Mohamed El Baz, known for his close ties to the government, had pointed out Nov. 18 on his show “90 Minutes” on Mehwar TV that 15 to 21 Cabinet ministers would be changed.

In his show on Sada al-Balad on Nov. 21, journalist and parliament member Mustafa Bakri talked about the ban on governors and ministers from appearing in the media. “I want to host Egyptian ministers and governors to talk about government policy, but I don't know how, if I am unable to host an official.”

He said the government benefits from having its ministers and officials speak publicly, as they defend the Egyptian state’s achievements. "Isn’t it the right of every minister to appear [in the media] to talk?" Bakri asked. He stressed the need for these ministers to present their action plans in the media.

On Dec. 2, parliamentarian Khaled Abu Talib asked Prime Minister Mustafa Madbouly at a parliament session about the reasons for the delay in issuing the reshuffle decision, which was supposed to be announced in November.

Abu Talib expressed Egyptian citizens’ disappointment with the performance of the ministers heading service ministries, especially health, education and agriculture. “There is an anticipation of a possible reshuffle … but we have yet to see any indications … which raises wide question marks,” he said.

He wondered if the government is still looking for ministerial candidates.

Regarding those changes, the security source said Egyptian authorities have allowed the media to publish only government-issued information and statements. The source explained that relaying statements and talk by parliamentarians is also permitted, but only without mentioning the names of specific ministers.

The source believes that too much speculation about the names of ministers and governors would result in confusion and rumors. “A minister does not know if he will leave the government or remain in office. The media should not mention the names of any minister. Some ministers could see their self-confidence undermined while others could expect to be assigned to head a specific ministry through media leaks only, without an official mandate from the government,” the source said.

A member of Youm7’s editorial team who declined to be named because of the sensitivity of his position confirmed for Al-Monitor that security agencies contacted the editorial department and told them not to publish the names of new ministers or governors before the issuance of an official decision on their appointments.

The source added, “Talking about the expected names of new ministers disturbs the security authorities overseeing the media in Egypt. Ministers and governors have been banned from appearing in the media since their statements were allegedly distorted or taken out of context.”

Mahmoud Othman, a lawyer at the Association for Freedom of Thought and Expression, told Al-Monitor that such bans allow the security services to interfere with the media's work. “Preventing the publication of any media content is an explicit violation of freedom of opinion and expression and freedom of the press. This is a violation of the constitution, which guarantees this right.”

Othman quoted Article 65 of the Egyptian Constitution: “Freedom of thought and opinion is guaranteed. All individuals have the right to express their opinion through speech, writing, imagery, or any other means of expression and publication.”

He said the constitution prohibits censorship, confiscation, suspension or closing Egyptian media outlets in any way. “This proves the illegality of censorship on newspapers and of instructions imposing restrictions on the content or interfering in the work of the press or media outlets,” he concluded.