The ministers of education and health have criticized the Egyptian Ministry of Finance for failing to provide the required budget, which prompted the government to ban public statements by some ministers. 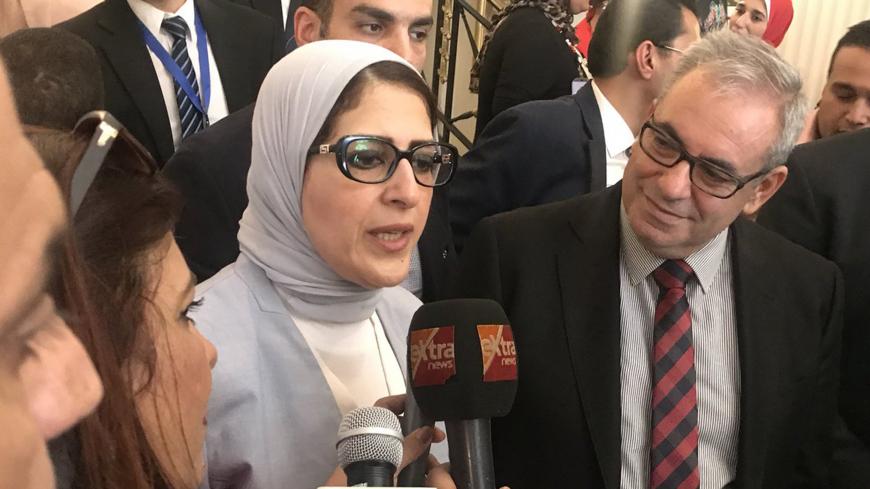 Two Egyptian ministers have made critical statements about the government allocating insufficient funds to the country’s education and health sectors last month, triggering talk about an imminent Cabinet reshuffle and pushing newspapers not to publish any further statements by a number of ministers.

"We have to exploit the presence of a political leadership that is fully convinced of the development of education. If we are not, we will have double problems. The Ministry of Finance hardly gives us a penny as it is,” Shawki said during the meeting.

He added, “Whatever funding we ask for, we get less. Moreover, the number of students multiply and the development of the curricula costs us millions. If we want the funding to continue we have to inject money.”

Minister of Health Hala Zayed, meanwhile, complained about the insufficient funds allocated to the Ministry of Health. At the May 12 meeting of the Planning and Budget Committee, Zayed said the budget of the ministry is not enough to implement the health insurance system in all governorates.

“The parliamentarians have two options: either amend and change the comprehensive health insurance law, or amend the general budget of the Ministry of Health to allow it to implement the law,” she said.

The meeting comes as parliament has started in May to discuss the general budget for fiscal year 2019-20.

The statements by the two ministers have pushed parliamentarians to call for an imminent Cabinet reshuffle. On May 13, member of parliament Mustafa Bakry wrote on Twitter, "We need a new Cabinet reshuffle in the current period, and there is a decline in the performance of some ministers.”

"I think we need a broad Cabinet reshuffle. I think it is time. There are a lot of question marks on the performance of some ministers,” he added.

Amr Hashim Rabie, deputy head of Al-Ahram Center for Political and Strategic Studies, said that there is an apparent conflict between the Ministry of Finance on the one hand and the ministries of health and education on the other.

“The ministers of health and education are calling for putting into effect directives made by President Abdel Fattah al-Sisi to increase the budgets for the health and education sectors. But it seems that the Ministry of Finance does not have the sufficient funds for financing the development of these two sectors,” Rabie told Al-Monitor..

The statements have also pushed the Cabinet to prevent some ministers from talking to the media in order not to raise more confusion, according to Cabinet sources.

Rabie said that this sends a bad message about transparency and freedom of speech in Egypt. “The public has a right to know about what is happening and this is a violation of freedom of expression in Egypt,” he added.

However, other analysts said that such a move is good for the time being in order not to create more confusion or create doubts about the government’s management of its budget and economic reform program.

“Now we have conflicting statements and this could confuse the public and it is better for these disputes to be held within the corridors of the Cabinet and the parliament. This can even affect the public’s trust in the government and its economic reform program,” Ahmed el-Shami, an economist and professor of feasibility studies at Ain Shams University, told Al-Monitor.

Shami, however, said that priority should be given to the health and education sectors because these are crucial for the development of society. “Without these two sectors, no development can be achieved and the Ministry of Finance has to comply with the directives of the Egyptian president,” he said.