How Egypt reacted to Ethiopia's move on Red Sea

Egyptians are growing concerned over Ethiopia’s establishment of a naval base on the Red Sea, which they see as a pressure card on Cairo regarding negotiations on the Renaissance Dam Addis Ababa is building on the Nile. 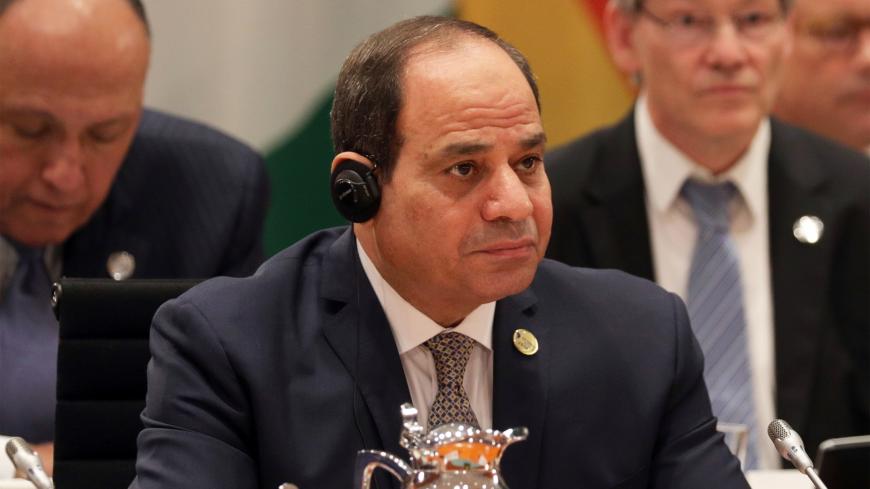 CAIRO — On Dec. 2, Capital Ethiopia reported that Ethiopia is preparing to establish a naval base at the southern entrance to the Red Sea, which is considered the first to be based on the coast of Djibouti. Observers believe this Ethiopian move is a new pressure card on the Egyptian regime regarding the negotiation track of the Renaissance Dam. Meanwhile, on Dec. 4, Egyptian President Abdel Fattah al-Sisi telephoned his Djiboutian counterpart, Ismail Omar Guelleh, to stress his readiness to coordinate with him on security and stability issues in Africa.

On Dec. 8, Commander in Chief of the Egyptian armed forces Lt. Gen. Mohamed Zaki ordered a military transport plane with urgent humanitarian aid aboard to head for Djibouti to help it cope with the repercussions of the recent floods in the country.

According to Capital Ethiopia, the Ethiopian navy will be stationed on the coasts of Djibouti, while the naval command and the navy’s headquarters will be based in Bahir Dar, capital of the Amhara region in northwest Ethiopia, under the leadership of Brig. Gen. Kindu Gezu.

This development followed an Oct. 20 visit by the Ethiopian Prime Minister Abiy Ahmed Ali to Djibouti, during which he met with Guelleh and discussed inaugurating the naval base.

On March 13, Ethiopia and France signed their first agreement on military cooperation. “The unprecedented defense cooperation agreement provides a framework … and significantly paves the way for France to help establish an Ethiopian naval entity,” French President Emmanuel Macron said at a press conference on the same day.

The Capital Ethiopia article also underlined that the base comes with French support and that a number of Ethiopian navy personnel are currently receiving training in France.

Although the Egyptian government has made no official statements commenting on the Ethiopian move, an anonymous security source told Az-Zaman on Dec. 10 that Egypt was anxiously following up on the establishment of the Ethiopian base, given the impact of this move on Egyptian national security and Arab security.

Maj. Gen. Hatem Bashat, a member of the Egyptian parliament’s African Affairs Committee, told Al-Monitor that Egypt rejects any violation of its national security on the Red Sea or any Ethiopian pressure to change the course of the Renaissance Dam negotiations. He said the committee is in the process of studying the matter and holding internal meetings to discuss the impact this naval base could have on Egyptian and Arab security, after which it will coordinate with the Ministry of Foreign Affairs and concerned authorities for immediate action.

Bashat confirmed that Egypt has a strong and effective presence on the Red Sea and can protect national and Arab security, without threatening Egyptian interests at the entrance to the Suez Canal or at Bab el-Mandeb.

The Red Sea is one of the most important corridors of global navigation and trade, with approximately 3.3 million barrels of oil transiting daily. Several countries share its waters, namely Egypt, Sudan, Yemen, Saudi Arabia, Jordan, Israel, Djibouti and Eritrea.

Maj. Gen. Jamal Mazloum, military expert and advisor to Nasser High Military Academy, told Al-Monitor he believes this step is nothing but an Ethiopian political maneuver and does not come within the framework of its willingness to go into war with Egypt in the event Cairo resorts to the use of power to strike the Renaissance Dam — as some claim — especially since the naval base will not be built overnight.

In addition, the Egyptian army’s capabilities are way more superior to its Ethiopian counterpart, Mazloum noted.

According to Global Firepower, the Ethiopian army ranks No. 47 among the 137 most powerful armies in the world, while the Egyptian army ranked 12th for 2019.

Cairo has been seeking for years to resolve the crisis of the Renaissance Dam — which Addis Ababa is building on the Nile at a value of $5 billion — through negotiations with Khartoum and Addis Ababa, but no agreement has been reached yet on the rules for filling and operating the dam reservoir.

This prompted Sisi to appeal to the international community to intervene in order to maintain regional security, and he called on the United States and the World Bank to intervene as a mediator in the hope of reaching an agreement that satisfies all parties.

While Egypt perceives the dam as a matter of life or death and believes it will lead to the desertification of agricultural lands and reduce the generation of electric energy from the High Dam, Ethiopia insists on its approach, considering the dam vital in its development and saving its population of about 107 million from poverty.

Mazloum said, “Ethiopia is trying to get a message across and tell Egypt that it is strong and capable of confrontation and will not be afraid to use its forces. The recent hostile statements to Egypt are proof, especially at a time when the latter is silent and did not mention any military confrontations.”

Ethiopian Prime Minister Ali said Oct. 22 during a parliament question and answer session that his country was ready to mobilize a million people if it had to fight a war over the Renaissance Dam.

“Some speak about the use of force on Egypt’s part. We must emphasize that there is no force that can prevent Ethiopia from building the dam. If there is a need to go into war, we can mobilize millions. If some people can launch a missile, others can use bombs. However, this does not serve the interests of either of us,” Ali added.

Meanwhile, Ahmed Askar, a researcher specializing in East African affairs at the Al-Ahram Center for Political and Strategic Studies, wrote in Qiraat African Dec. 11 that Ethiopia is seeking to secure a foothold in the Red Sea — via Djibouti — with the aim of playing a military role in the region, by entering as a party to the regional equation for the security of the Red Sea, and participating with its forces in securing the southern entrance to the Red Sea and the Strait of Bab el-Mandeb.

Askar noted there is a strong Ethiopian desire to strengthen its military capabilities due to regional changes and the possibility of any future crises with the countries of the region.